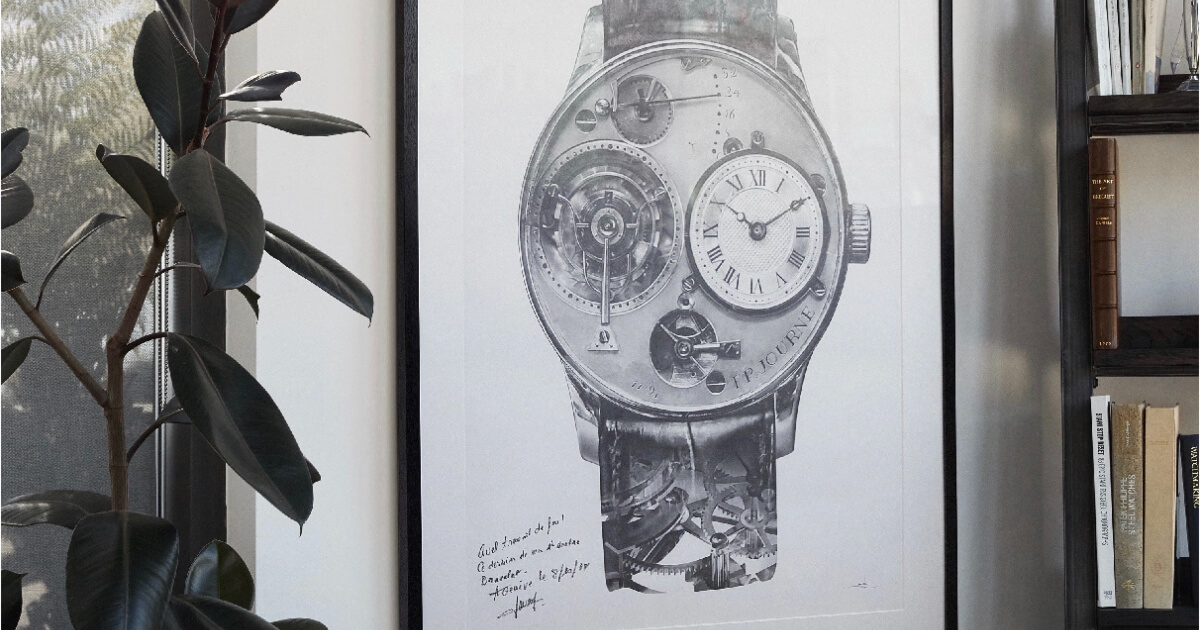 A Collected Man Will Auction A Unique Pencil Drawing Of F.P. Journe's First Wristwatch By Julie Kraulis & Signed By The Watchmaker

This illustration of Francois-Paul Journe's first-ever wristwatch was drawn entirely by hand by Julie Kraulis, for A Collected Man. Taking over three hundred hours to complete by graphite pencil, the drawing is also inscribed and signed by Monsieur Journe himself, who left a small message at the bottom of it.

It's being auctioned on A Collected Man, with bidding taking place directly on our website. All proceeds, not just profits, from the sale of this illustration will be donated to the Wellcome Trust's COVID-Zero Research Initiative, specifically in their efforts to fund vaccine development against the virus.

Measuring an impressive 25.75" by 40” (65.4 x 101.6 cm), this illustration recreates in vivid detail the first wristwatch made by Journe, integrating a tourbillon and a remontoire d’egalité. Completed in 1991, it laid the foundations for all the pieces which would follow, cementing Journe’s horological skill and aesthetic from early on.

From the impression of motion conveyed by the rotating tourbillon to the hand-engraved numerals on the power reserve, the illustration wonderfully captures the essence of this historic watch, in all of its small, captivating details.

Fading into the strap, Kraulis has also depicted a stylised view of the movement mechanics, depicting the remontoire d’egalité, the core of the watch, at an angle.

On the bottom left corner, it is signed by Francois-Paul Journe in French, who left a small message when A Collected Man presented it to him in 2018, in Geneva. The message reads, “What a crazy piece of work! This drawing of my first wristwatch.” - Francois-Paul Journe.

Julie Kraulis, the talented Canadian artist known for her focus on the graphical representation of horological objects, describes her discovery of Francois-Paul Journe's work as such, "Upon discovering F.P. Journe, I became fascinated by his unique and creative approach to the art of timekeeping. His timepieces were unlike any I'd come across before."

With Kraulis and A Collected Man having discussed this project for quite some time, she comments, "The design aesthetic and mechanical prowess are truly remarkable and so, it was a very special honour to work with A Collected Man on this project to capture Journe's first, foundational piece from which he would build his independent empire."

The auction will end at midnight (BST) on Sunday, 31st May.

This F.P. Journe Tourbillon Illustration, made by Julie Kraulis for A Collected Man, has been enclosed in a black wooden frame, with protective glass. A Collected Man offers complimentary worldwide shipping to the successful bidder.