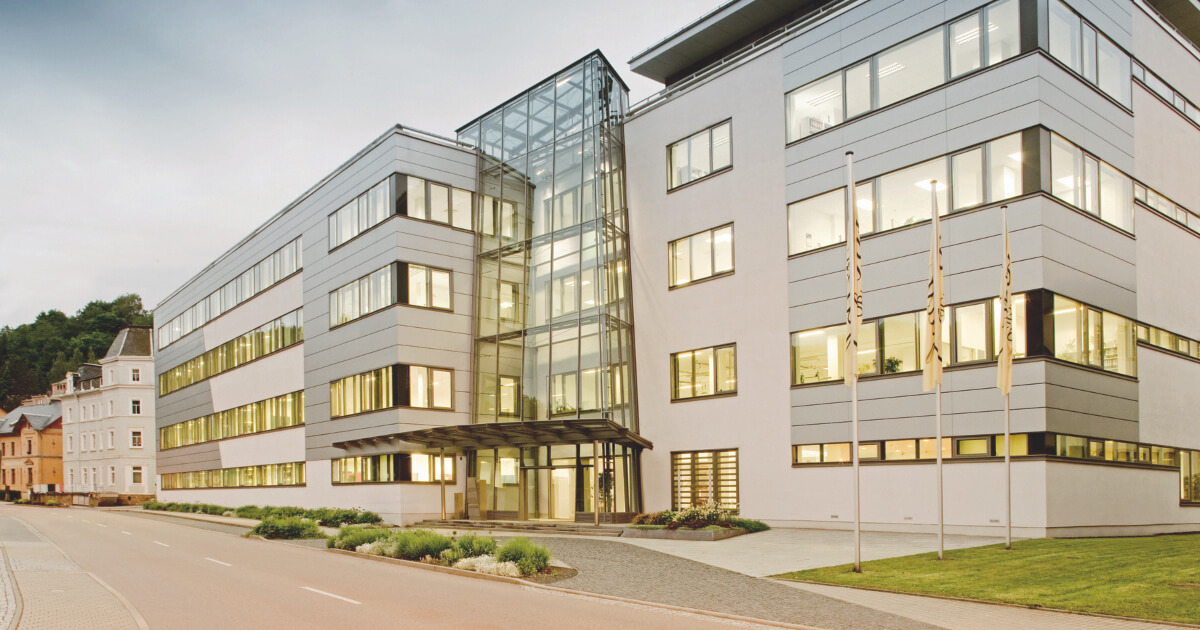 A Factory Tour To Glashütte Original

Ionut and I took the opportunity of passing nearby to visit one of the founding watchmakers in Glashütte – Glashütte Original. We have been welcomed by Michael Hammer, the PR of the company. He also offered us a personal tour through the building.

The roots of the Glashütte Original manufactory reach back to the years 1845, when the first master watchmakers settled in Glashütte. Currently the company is underpinned by values such as excellence, modernity, originality, tradition, exclusivity or beauty.

I was first impressed by the building in itself, through its interior organization. An open modern airy atrium in the middle, with its impressive 23-meter high ceiling, with a lot of natural light where perfect silence surrounds you. Around, the factory is structured on three functional upper floors, where the watchmaking process actually occurs. The four floors together occupy more than 10,000 square meters. There are doors with secured entry, where only authorized personnel are allowed. From downstairs you can see around the three floors and from time to time people quietly passing through the hallways and entering or leaving chambers.

I found the Glashütte Original premises very open and transparent as if the company is trying to reveal what hides behind the scene. The whole factory was built as to tell the story of the watchmaking process. At the first glance it seems that the focus was on the story telling of fine mechanics, on how to show the world the beauty and complexity of this art creation.

Almost each chamber features large monitors with interactive touchscreen presentations where the virtual guide explains what happens inside those walls. Some of the chambers are even provided with transparent walls offering a view to the visitors of what is going on in various ateliers, workshops and departments responsible for the manufacturing and final assembly. Here we could watch employees performing their daily tasks. Thus the individual steps in the manufacturing process for Glashütte Original’s timepieces are on display – transparent, authentic and informative.

The so-called “learning path” follows the sequence of the work process in the manufactory, starting with production planning and design. Besides the monitors, there are also display cabinets which are arrayed with the materials and tools used in the departments and illustrate the different steps in the working process. We could thus experience the full, elaborate manufacturing process and to appreciate both the extent of in-house expertise and the watchmakers’ exceptional craft skills.

As Michael told us, the headquarters has been recently renovated into this modern facility. A first renovation process took place in 2003. In fact the Mother Nature called for this renovation as in 12 august 2002, after a week of heavy rain, the high water dam in Glashütte burst and a five-foot wave came rushing through the town. The whole town had been then flooded. Thus Glashütte Original headquarters too needed repairing and renovation.  This was the time when the learning path was created. However, the building as it stands today, was created in 2014 after a modernization and expansion process based on glass, light and openness architectural principles.

The company makes up to 95% of all components of a watch itself, including the highly sophisticated dials. It produces independently, under the same roof, all essential components of a movement, from the base plate to the balance that determines the beat.

When visiting the production sites, Michael explained and showed us the symbol of the company and the distinctive traits of Glashütte Original. The symbol is a mirrored G, one G facing the past and the other the future, standing for a balance between tradition and vision, between yesterday and today.

As for the original details, several features have stand over the years as a mark of Glashütte Original which combine together to create the small-scale work of art.  Thus, one of the characteristic feature of Glashütte Original ever since its earliest days is the Glashütte stripe finish, the fine, regular, decorative finish applied to the gear train bridge, winding rotor and a number of balance cocks.

Then we have the hand engravings applied on the balance bridges and balance cocks. They are engraved by hand without the use of any pattern. The engravers must ensure that their efforts do not interfere with the function of the components.

The movements at Glashütte Original also have a swan-neck fine adjustment regulating the rate of the watch and a screw balance by which the balance wheel is set with tiny screws that can be used to correct any imbalance and to regulate the moment of inertia.

The sunburst finish which is an ornamental element for large gears. Depending on the angle, light falling on the surface is reflected back in the form of a circle, producing a virtual hypnotic effect.

There are also the screw-mounted gold chatonsw here rubies are set in as with the historic precedents and the perlage which is a typical Glashütte surface finish for the base plate. An important originality element is the blue screws. The tiny steel screws are first polished until glossy, then heated to approx. 290°C. The screws change color in the process from grey to yellow, brown, red and violet until they reach the desired cornflower blue which renders them more resistant to corrosion.

In contrast to Swiss practice, almost all jewel bearings have traditionally been mounted in a single gear train bridge. It covers three quarters of the movement’s surface and houses all moving parts providing additional stability to the movement.

The last but not least characteristic feature for Glashütte Original is the beveling, the process by which the edges of metal movement components are filed to an angle of degrees and polished by hand. This finishing lends the material additional density and renders it more resistant to external influences.

Our tour ended after almost two hours, in which time we have been able to see behind the glass walls of the manufactory building the soul of Glashütte Original: the elaborate production and careful assembly of thousands of delicate individual parts.