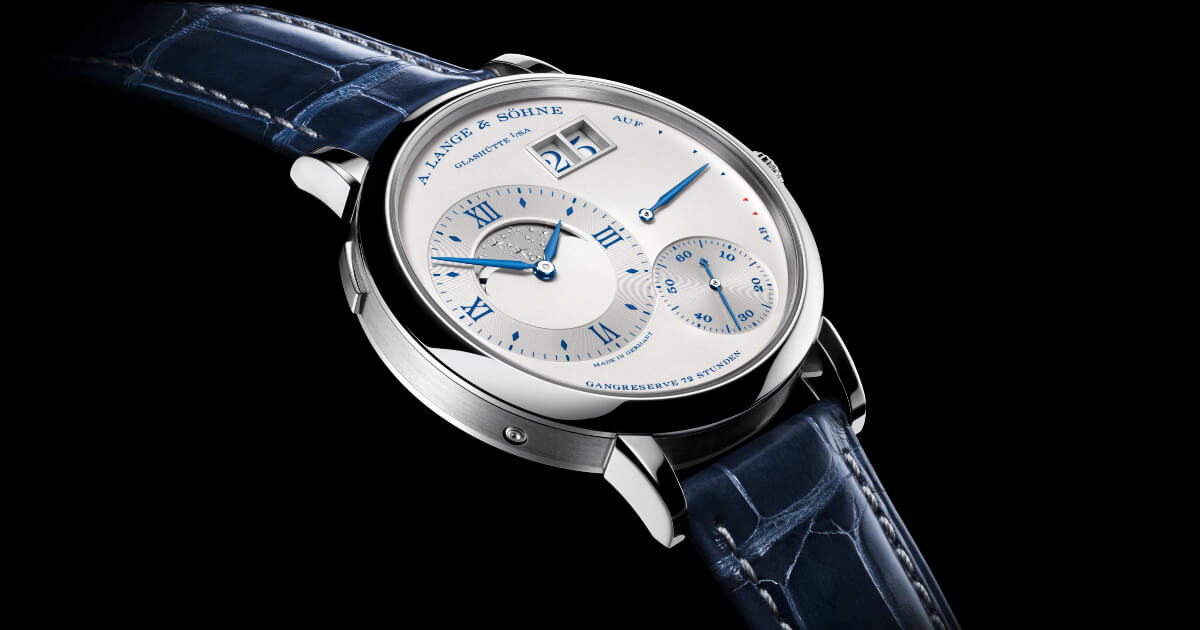 In its anniversary year, commemorating the launch of the Lange 1 in October 1994, the Grand Lange 1 Moon Phase will be released as a jubilee edition in white gold with a limitation of 25 watches. It features an argenté-coloured dial in solid silver with printed deep-blue numerals and a white-gold lunar disc with hand-engraved stars.

The Grand Lange 1 Moon Phase “25th Anniversary” is the second model from the anniversary collection with which A. Lange & Söhne is celebrating the most important milestones of the Lange 1 watch family in 2019. Its special features include an argenté- coloured dial made of solid silver with blue-printed numbers, indices and a blue date and a colour-coordinated blue alligator leather strap with grey stitching. Furthermore, it is the first Lange watch with a hand-engraved lunar disc made of solid white gold. Six stars and numerous small dots have been engraved by hand to create a starry sky. Together with the inlaid golden moon, this forms a unique three-dimensional night scene.

This ensures that the Grand Lange 1 Moon Phase gives the most space to this astronomical complication of all the moon-phase models from A. Lange & Söhne. The Lange outsize date has also been enlarged proportionally by four per cent to create a holistic overall appearance.

The sapphire-crystal caseback reveals the calibre L095.3 that is meticulously decorated and twice assembled by hand with the typical characteristics of the Lange 1 watch family. The three-quarter plate made of untreated German silver decorated with Glashütte ribbing affords a view of the screw balance with a balance spring developed and manufactured in-house. This is held in place by a hand-engraved balance cock with a special engraving: the number “25” in the Lange-typical outsize date window, surrounded by a floral pattern. All engraved recesses are accentuated with a blue coating.

The number “25” refers to the anniversary of the presentation of the first Lange collection of the new era. On 24 October 1994, company founder Walter Lange and his partner Günter Blümlein presented the first four wristwatches since the company’s relaunch – among them the Lange 1 – at the Dresdner Residenzschloss, the royal palace in Dresden. With its off-centre dial layout and the typical Lange outsize date, it is the best-known example of the A. Lange & Söhne watches. In order to celebrate this anniversary fittingly, a limited-edition classic from the Lange 1 watch family will be presented every month until 24 October 2019.

Operating elements: Crown for winding the watch and setting the time; rapid- correction push piece for the outsize date; recessed push-piece for correcting the moon-phase display