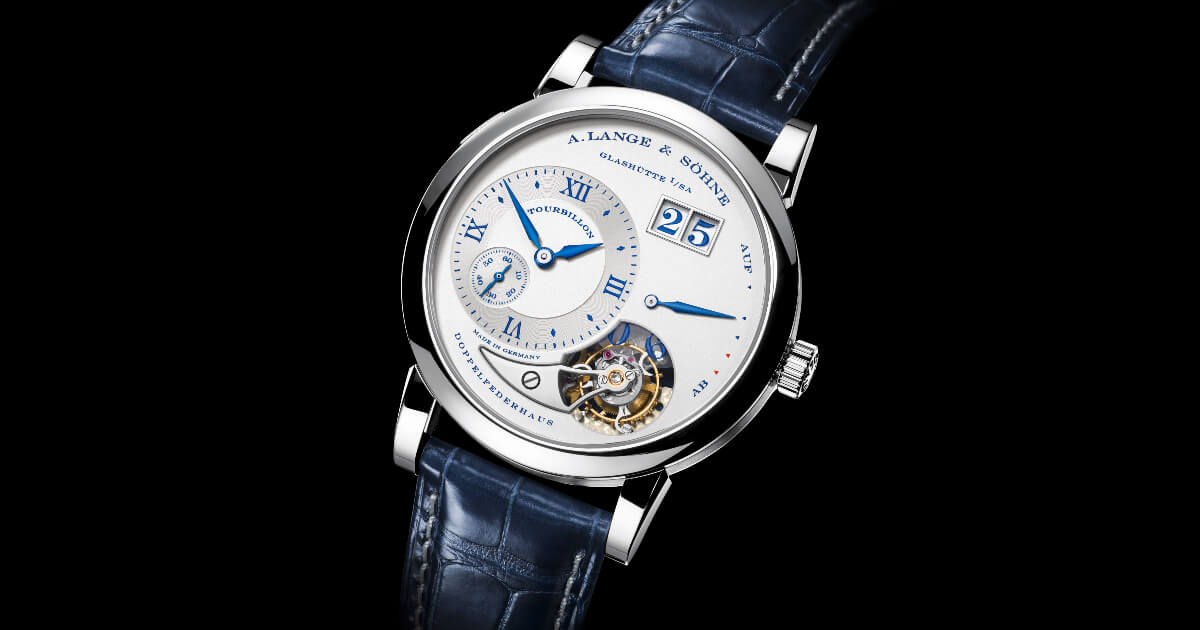 In the year 2000, the impressive A. Lange & Söhne Lange 1 Tourbillon had its debut as the world’s first wristwatch with the unusual combination of a tourbillon, an outsize date, a three-day movement and a power-reserve indicator. In a 25-watch limited edition in white gold, it now completes the ten-part special series that celebrates the 25th anniversary of the Lange 1.

A watch for special occasions – this is how the Lange 1 Tourbillon was described when it was first presented. A. Lange & Söhne saluted the transition from the 20th to the 21st century with it, continuing a tradition that dates back to the belle époque in Paris. Lange’s first centennial tourbillon – still in a pocket watch format – attracted global attention at the 1900 Paris Exposition.

In 2010, as part of the “165 Years – Homage to F.A. Lange” anniversary collection, the Lange 1 Tourbillon was one of the first three watches of the manufactory with a case in honey gold, a material used exclusively by Lange. When the Lange 1 celebrated its 20th birthday in 2014, it was introduced as the fourth model of the Handwerkskunst series in a limited edition of 20 platinum-cased watches with rare movement decorations and a black enamel dial.

Like all ten special editions of the anniversary collection, the 2019 version of the Lange 1 Tourbillon is presented in silver and blue. The 38.5-millimetre white- gold case sets the stage for a solid-silver, argenté-coloured dial that contrasts with the blued steel hands.

The inscriptions are printed in blue, including the numerals of the outsize date.

Suspended between two diamond endstones, the one-minute tourbillon features a stop-seconds mechanism. The patented system allows the balance inside the rotating tourbillon cage to be stopped instantaneously. It is clearly visible in a generous aperture in the dial and through the glass units disc of the outsize date.

The tourbillon cock, prominently integrated in the dial, is decorated with the black polishing technique. On the movement side, the tourbillon bridge and the intermediate-wheel cock are engraved by hand. The colour concept is echoed in the blue-filled recesses of the engraving.

The unifying anniversary collection signature, a reliefed depiction of the outsize date, is located on the intermediate wheel cock.

Movement: Lange manufacture calibre L961.4, manually wound, crafted to the most exacting Lange quality standards, decorated and assembled by hand; precision-adjusted in five positions; plates made of untreated German silver; steel tourbillion cock on the dial side, with black polishing; blue intermediate wheel and tourbillion cock engraved by hand, engraving of the Lange outsize date on the intermediate wheel cock

Jewels: 51, of which 2 diamond endstones