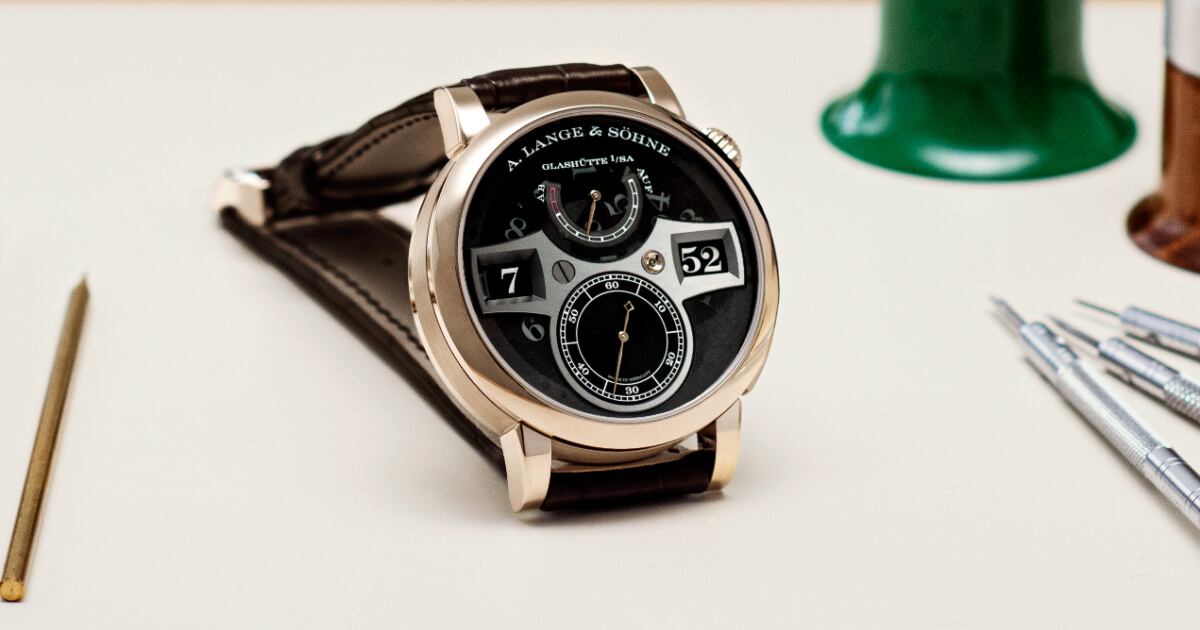 Zeitwerk Honeygold "Lumen" - these three words are the symbol of an extraordinary path that A. Lange & Söhne took in precision watchmaking. The state-of-the-art technology and design concept of this series (Zeitwerk) has been unique for more than ten years, being created exclusively for A. Lange & Söhne watches. The new version introduces the honey gold which is a Lange's proprietary asset.

The name "Lumen" refers to the semi-transparent specially developed dial that enables the luminous jumping numerals appear totally visible which makes each of the 200 watches in this limited edition unique in three ways. But that’s not all: the power reserve is now doubled to 72 hours due to the newly manufactured calibre. The Zeitwerk Honeygold "Lumen" is the result of continuous efforts in refining the mechanical watch.

The jumping numerals mechanism has a large hour ring that is almost as the diameter of the movement. The numerals match identical in size and they switch precisely. You will read them from left to right.

For switching, the movement delivers the power from the two mainspring barrels. The patented constant-force escapement controls the switching point and assures the balance is driven with a constant power.

If the first calibre didn’t have a large power reserve, now the Zeitwerk calibre L043.9 has almost double – 72 hours. Another new feature of this new movement is the pusher at 4 o’clock. With it, you can switch the hour indication separately, which makes easier to set the time. Regardless how the pusher is actionized, gently or vigorously, the switching is always uniformly executed, because the impulse will only be generated when you release the pusher.

The introduction of a pusher for correcting the hour indication, first integrated in the Zeitwerk Date released at SIHH 2019 (please read more about here), imposed enormous effort from the designers and brought to 462 the number of movement parts in the timepiece. When the pusher is pressed, a clutch uncouples the hour ring from the jumping numerals mechanism in order to enable the correction independently of the switching cycles of the time display. The crown at 2 o'clock is for the setting of the minute display in both directions.

The balance wheel beats at a frequency of 18,000 semi-oscillations per hour (2.5 hertz). Through the sapphire-crystal caseback you can admire the finissage of the twofold-assembled movement.

The non-exposed luminous numerals can absorb enough UV light and glow in the dark, thanks to the light-permeable coating of the dial. In dark the watch glows from the discs that are only vaguely discernible during the day.

"Lumen", with A. Lange & Sohne, refers to a series of watches that rely on up-to-date scientific insights to make an unequivocal design statement. The path opened in 2010 with Zeitwerk "Luminous" was continued with "Lumen" editions of the Grand Lange 1 released in 2013, the A. Lange & Sohne Grand Lange 1 Moon Phase in 2016 and the A. Lange & Söhne Datograph Up/Down “Lumen” Ref. 405.034 from 2018 (please read more about here).

With limited production of 200 pieces, the A. Lange & Söhne Zeitwerk Honeygold "Lumen" is in line with the tradition that started 11 years ago but transcends it. For the first time with "Lumen" model, the case, 41.9 mm in diameter, is made of honey gold - Lange's proprietary. A special thermal treatment and several admixtures confer to the 18-carat gold alloy extra hardness and a lustre that cannot be copied. The same material was used for the hands of the power-reserve indicator, the subsidiary seconds and the Lange prong buckle. The dark dial combined with a dark-brown leather strap is a breath taker.

For a retail price of €114,000, the new A. Lange & Söhne Zeitwerk Honeygold “Lumen” seems like a lot of money, but considering the complication that the watch is offering is not out of this world. Keep in mind that the prices for the Lumen editions from A. Lange & Söhne had increased drastically on the secondary market, making this a steal.

Strap and Buckle: Hand-stitched dark brown leather with a prong buckle in Honeygold.