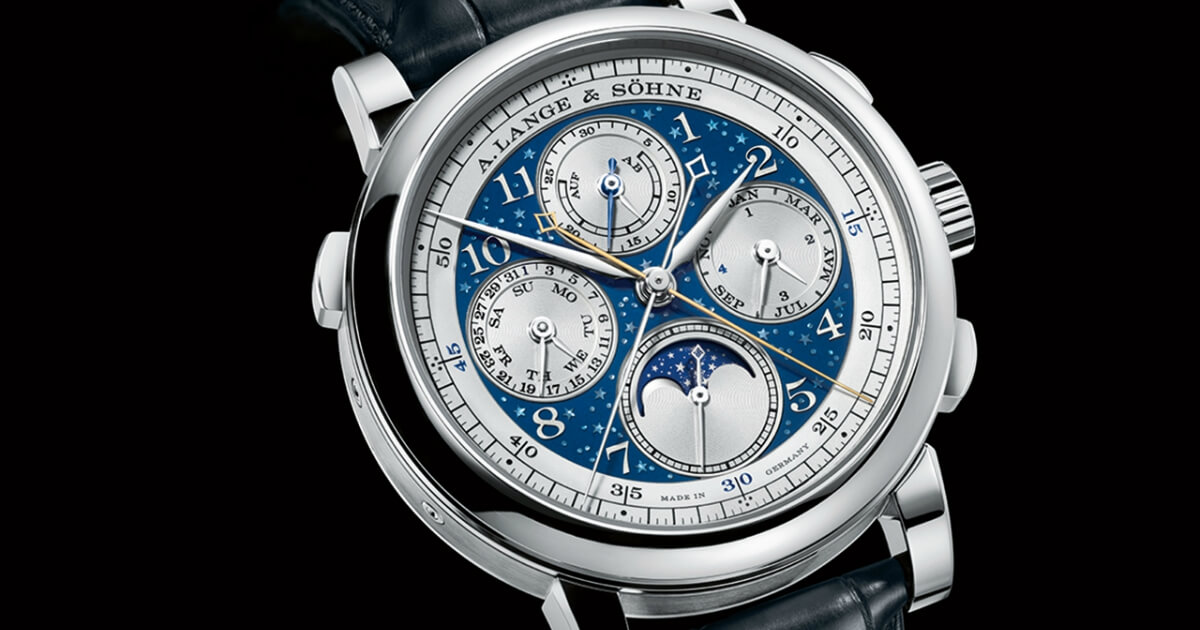 With an exclusive Handwerkskunst edition, A. Lange & Sohne demonstrates how artisanal virtuosity becomes truly grand art. The dial and the hinged cuvette of the new 1815 Rattrapante Perpetual Calendar Handwerkskunst consist of blue enamelled white gold with elaborate relief engravings. Ennobled with special decorative techniques, the movement stands out with the rare and fascinating combination of a split-seconds chronograph and a perpetual calendar with a moon-phase display.

In its launch year, the 1815 Rattrapante Perpetual Calendar attracted considerable attention in two respects: in January 2013 at the Geneva Salon, it was enthusiastically received by the horological community as a technically and aesthetically convincing union of classic complications that rank among the most sophisticated mechanical ensembles in precision watchmaking. At the Grand Prix d'Horlogerie de Geneve in that same year, the watch was not only the winner in the Grand Complications category but also won the Public's Choice Award.

This remarkable timekeeping instrument was the ideal starting point for a limited 20-watch Handwerkskunst edition. It is the sixth A. Lange & Sohne model with this attribute that stands for the particularly artistic decoration of the movement, dial and case. The 1815 Rattrapante Perpetual Calendar Handwerkskunst confronted the finishers, engravers and enamel artists with an exciting challenge: to raise the decorative opulence for which the manufactory is known to the next level with rare and in some cases revived techniques as well as innovative ideas.

This is the first model to combine enamel art and engraving on its dial. Solid white gold is the substrate for the deep-blue enamel beneath which the sculpted contours of the relief-engraved stars appear to be a visual extension of the moon-phase display. The Arabic numerals are flush with the enamel and harmonise perfectly with the rhodiumed white-gold hands of the time and calendar indications as well as of the power-reserve indicator. The colour of the enamel is echoed by the lunar disc as well as the blued-steel minute-counter hand. These elements contrast exquisitely with the four recessed subsidiary dials in argente-coloured white gold. The chronograph hand offers an especially distinctive colour accent: it is crafted from gold-plated steel. The dial is framed by an argente-coloured flange ring with a traditional railway-track minute scale.

The moon theme recurs on the hinged cuvette that protects the sapphire-crystal caseback. It depicts the goddess Luna, the ancient mythological personification of the moon, executed in relief and tremblage engraving. The medallion shows her with her characteristic attributes: a billowing veil, a crescent moon diadem and a torch with which she lights up the darkness. The medallion is surrounded by a raised star and cloud relief in blue enamel.

Artistic movement decorations reflect the technically ambitious multiple-complication timepiece. The German-silver train bridge is finished with a granular texture often found in the movements of historic pocket watches. Relief and tremblage engravings on the operating-lever, cover and chronograph bridges as well as on the rattrapante and balance cocks reflect the stellar motif of the dial. In all other respects, the finissage of the 631-part manufacture calibre L101.1 complies with the strictest Lange standards.

The split-seconds chronograph allows the measurement of lap times and consecutive times. It is controlled by two column wheels - one for the chronograph and one for the readily visible rattrapante mechanism which is activated by a pusher at 10 o'clock. The perpetual calendar mechanism correctly displays the individual durations of each month in the course of a calendar year, including all leap years until 2100. Integrated in the subsidiary seconds dial at 6 o'clock, the moon-phase display is calibrated to remain accurate for 122.6 years. The manually wound movement has a maximum power reserve of 42 hours. A power-reserve indicator reminds the owner when it is time to rewind the watch.

The 1815 Rattrapante Perpetual Calendar Handwerkskunst comes in a 41.9 millimetre white-gold case with an edition engraving. It is worn on a blue-grey alligator leather strap secured with a white-gold deployant buckle.