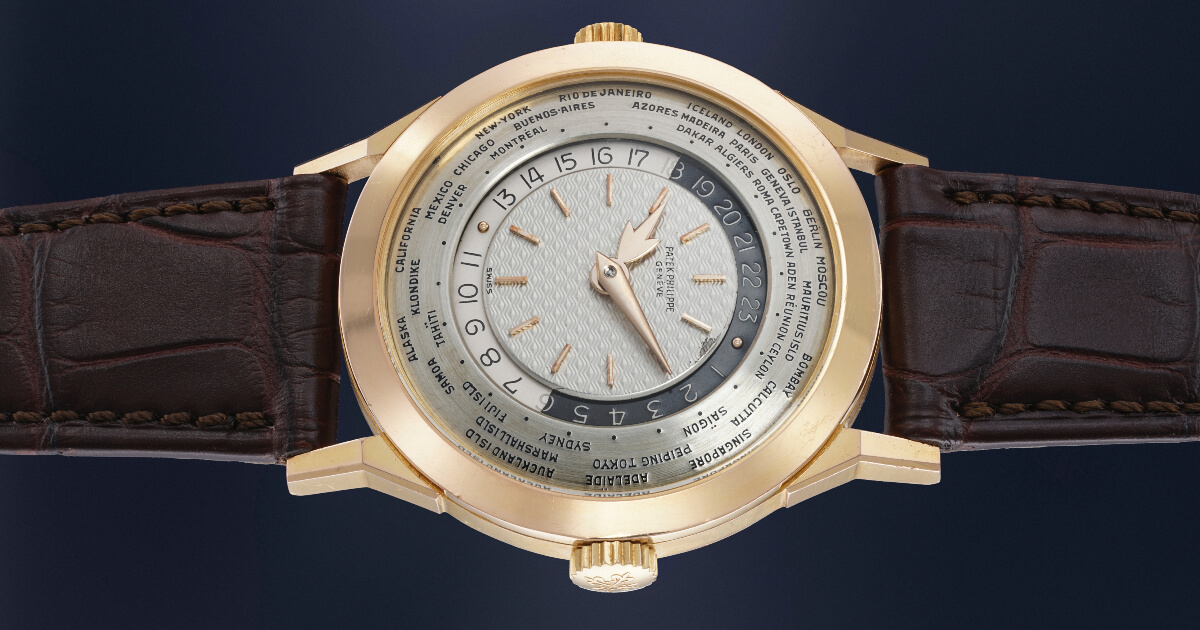 Phillips in Association with Bacs & Russo is delighted to announce the sale of a Patek Philippe reference 2523/1 world time wristwatch in rose gold, to be auctioned during The Geneva Watch Auction: XII on 6 and 7 November, 2020. The star lot of Phillips’ upcoming double-evening auction, this extremely rare double-crowned world time model with guilloché dial is one of only four known.

Aurel Bacs, Senior Consultant of Bacs & Russo and Alex Ghotbi, Head of Watches Continental Europe & Middle East jointly said, “It is interesting how certain complications are immediately associated with certain brands, and the world time and Patek Philippe are indissociable. One of Patek Philippe’s most important creations, the reference 2523/1 in pink gold and guilloché dial is in fact as rare as a stainless-steel reference 1518, as only four are known. The example we have the privilege of presenting in the Geneva Watch Auction: XII is a time capsule, its impeccable state of preservation and superb dial make this reference 2523/1 one of the most desirable watches to have left the ateliers of Patek Philippe. To be able to behold and let alone to own such a spectacularly preserved piece is a once-in-a-lifetime opportunity for the collector of such holy grail watches.”

Legend has it that it was in 1876 after missing a train in Ireland that Scottish railroad engineer Stanford Fleming began to look for a way to standardize time. Speaking before the Royal Canadian Institute in Toronto in 1879, he proposed to divide the Earth into 24 time zones of 15° each, one hour apart with a universal time for each individual zone. However, as with most revelations that threaten to change the world, his idea was met with considerable resistance from governments and scientific communities alike. Fleming’s persistence paid off and his idea was finally adopted in 1884 in Washington, when the 25 nations taking part in the International Meridian Conference decided that the prime meridian of 0° longitude would pass through Greenwich, England.

Surprisingly however, a watch that would indicate multiple time zones seemed of little interest to watchmakers until genius watchmaker Louis Cottier designed a pocket watch movement featuring a local time with hour and minute hands at the centre, linked to a rotating 24-hour ring, and bordered by a fixed outer dial ring with the names of different cities inscribed on it. The city of choice (local time zone) was placed at the 12 o'clock position with the hours/minutes hand set at local time, the watch would then display the correct time in both hours and minutes, night and day, for every time zone in the world simultaneously, all the while allowing easy and accurate reading of local time, and all on a single dial.

Cottier miniaturized his invention in the late 1930s which first appeared in prototype and pre-series then in the Patek Philippe reference 1415, a single crown model with its bezel engraved with cities to be switched manually. Patek Philippe made Cottier’s invention a staple in their collection creating a variety of models in different case shapes, pocket and wristwatches with simple dials to enamel or lavishly guilloché like this example to be sold by Phillips.

When introduced to the market this new double crown world time was not a commercial success resulting in very few pieces manufactured. Beyond the appeal of the reference itself, this example sports two extremely remarkable features – first and foremost, its case is preserved in perfect and unspoiled condition. It preserves its original polished and brushed surfaces, and the characteristic angular and faceted lugs are perfectly crisp.

The model responds particularly badly to polishing, as even the lightest intervention dulls its sharp angles. Secondly, its dial is fitted with superb guilloché pattern. It is one of only four known pink gold 2523/1 with guilloché dial and only one of two to ever appear at auction. Out of the four known reference 2523/1 in pink gold with guilloché dial, one is in the Patek Philippe museum and the other two have been in private European collections for over two decades.