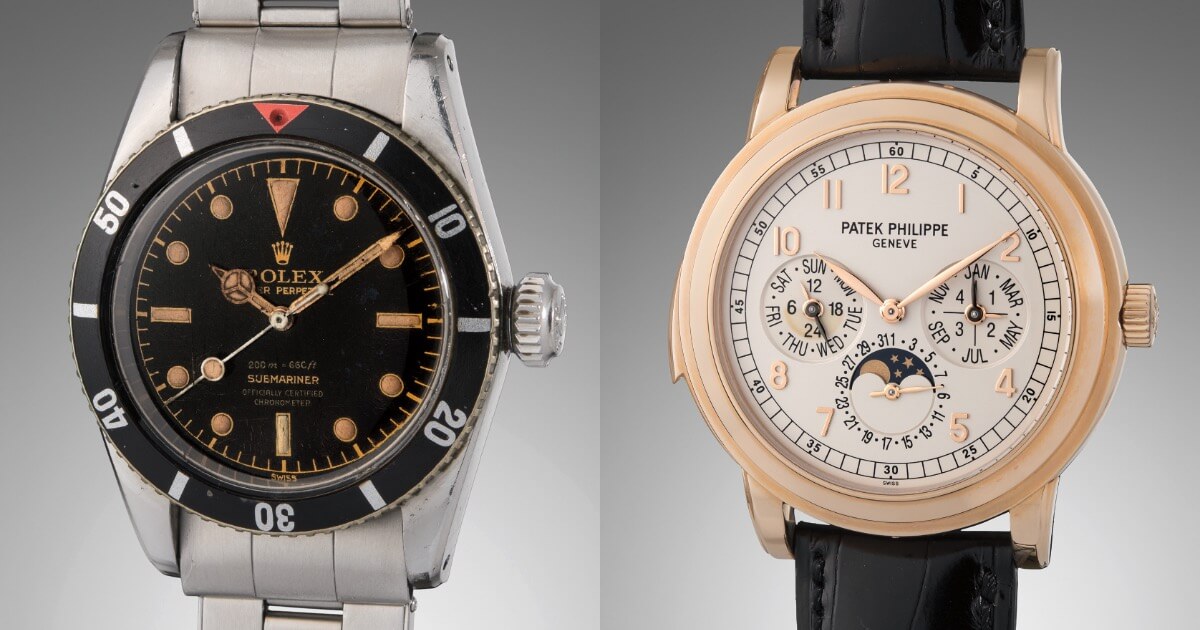 The present watch is among the most impressive and best preserved examples of a Rolex "Big Crown" Submariner to appear publicly in recent years. Fresh-to-the-market, this early reference 6538 was made in 1957, and is characterized by its black lacquer "four-liner" dial, lack of crown guards and a large winding crown - hence its nickname. The reference 6538 has been forever immortalized onscreen by Sean Connery's James Bond in films such as Dr. No and Goldfinger. Consequently, the reference 6538 is also known as the "James Bond Submariner" amongst collectors. Preserved in exceptional condition having never been polished or restored, it is offered complete with its hardly ever seen original guarantee and chronometer certificate. This wristwatch is a rare treasure that would certainly be the crown jewel of a Rolex sports watch collection.

The Patek Philippe reference 1463 can be considered as amongst the most collectible and sought after chronograph watches thanks to its oversized case, rarity, and aesthetic beauty. Examples in stainless steel, such as the present lot, are the pinnacle for any collector. Released in 1941, the vast majority were made in yellow gold, with less than 10% believed made in steel. The model is largely considered to be Patek Philippe's first "sports utility" wristwatch - a chronograph combining luxury with capabilities for the outdoors, including a waterproof case. Each featured playful rounded chronograph-pushers, known as "Tasti Tondi" in Italian. Fitted with a stunning "two tone" silver dial, it's one of only eight known with this dial variation.

With only 27 examples known to the market, Patek Philippe's single-button chronographs are among the rarest and most sought after in the field of complicated wristwatches. Of these 27, only 16 are known with a hinged, "Officier"-style case, including the present example, which was manufactured in 1928 and sold in 1933. Inside the double-hinged officer case ticks an immaculately finished column wheel chronograph movement. The ébauche was made by Victorin Piguet & Co. of Le Sentier, which during the early 20th century was one of the world's most important makers of high quality complicated movements. Patek Philippe's production of single button chronographs ended in the late 1930s, not to be re-introduced until the 21st century. Fresh-to-the-market, this single button chronograph is a charismatic and elegant watch that will delight collectors for its beauty, rarity, and overall excellent condition.

Patek Philippe's iconic Reference 5016 was introduced in 1993 and was at the time the most complicated wristwatch ever produced by the firm, fitted with watchmaking's most prestigious complications - a minute repeater, retrograding perpetual calendar, and tourbillon. The present example in 18 karat rose gold is fresh-to-the-market, consigned by the original owner and in near new condition. It comes complete its with original certificate of origin, presentation box and additional solid case back. The reference 5016 is a wristwatch that embodies all the exceptional qualities one expects from Patek Philippe, with a classic design, a highly complicated movement, and immaculate finishing - a trophy watch for the connoisseur.

Appearing for the first time publicly, this minute repeating Patek Philippe reference 5078P is the only known example fitted with a blue "soleil" dial. A modern classic, the reference 5078 was initially offered in platinum with a choice of white enamel dial or black lacquered dial, or 18K pink gold with white enamel. A probably unique piece that was likely custom-ordered by a very important client, it is offered in "as new" condition, remaining perfect preserved inside its original "double sealed" factory box. Accordingly, it is designated on the certificate of origin as a reference 5078P-013 - the first and only known example of the reference to appear with this dial variation. The uniqueness of its dial, its pristine state of preservation, and the presence of all of its original accessories, most important example of the reference to ever appear on the market.

The reference 5074 is one of the most important grand complication timepieces made by Patek Philippe. Featuring an aesthetic that superbly blends vintage and modern styling, its functional, oversized 42mm case diameter permits the use of cathedral gongs for the minute repeating complication. The cathedral gongs were created from a special alloy, and each wrap around the movement one and three-quarter times. The resulting sound reverberates for an extended period of time, much like the sound of bells being struck inside a cathedral. In near new condition and fresh-to-the-market from the original owner, this reference 5074 can be considered a trophy watch. Offered complete with its original certificate, literature, and presentation box, the present watch is an exceptional example that delivers a breathtaking acoustic experience.

The present lot underscores the legendary Daytona model's racing pedigree, as it is the earliest known Rolex Daytona offered as a prize to the winner of any Daytona race. After being awarded to Lonnie "LeeRoy" Yarbrough following his Daytona 500 win in 1969, he wore it during competition as seen in multiple photographs; most notably, it is visible on his wrist during his American 500 win also in 1969. Behind the wheel of his Junior Johnson Ford Torino Talladega, Yarbrough became the first person to win NASCAR's elusive "Triple Crown" title that same year. During his relatively brief racing career, Yarbrough set numerous records on the Grand National stock car circuit, earning him laudatory titles such as "American Driver of the Year" and "Ford's Man of the Year." This extraordinary "Paul Newman" Daytona originally lived an exciting life as part of its daring owner's racing success, before it would be sold and stored away for decades. An ultimate trophy watch for collectors, Phillips is thrilled and proud to offer it at auction for the first time ever.

In the field of wristwatches, Omega's Speedmaster is a true icon. Its history spans almost sixty years with the very first Speedmaster launched in 1957, having gracefully evolved through the decades with a variety of dial, hand, bezel, and bracelet variations, and today's modern Speedmaster line has unmistakable ties to the original. The first generation model, reference 2915 such as the present lot, is considered by collectors as being the ultimate Speedmaster to own. Offered in wonderful overall condition, this Speedmaster from 1958 is an all original textbook example of one of the very first Speedmaster models - an enduringly iconic reference revered by enthusiasts, and a trophy watch for the connoisseur.

The Portugieser, introduced in 1942, was one of the largest and most remarkable watches ever produced by IWC. The present lot is amongst the earliest examples of the reference, and one of less than 150 examples imported to Portugal, as evidenced by the crisp armadillo hallmark on its lower right lug - a Portuguese import mark. The rarity and historical significance of the present lot should be enough to capture the heart of any collector, but these elements are further enhanced by this its exceptional case condition and beautiful black dial. The dial boasts a vivid black lacquered surface with bold, luminous hour markers and stunning silver gilt printing. Phillips is proud to offer this remarkable example for the first time at public auction, without a doubt one of the finest and most important Portugiesers to ever appear on the market.

Audemars Piguet's Royal Oak Concept was released in 2002 for the 30th anniversary of the legendary Royal Oak model - an exploration on what the brand believed the Royal Oak could look like in the future. Its case is made from Alacrité 602, an innovative and resilient alloy consisting of cobalt, chrome, tungsten, used in the aerospace industry and for medical applications. To date, Alacrité was only used for this model, and never again used for any other watch from any other brand. The Royal Oak Concept is a remarkable statement piece - a unique and innovative timepiece that showcased both the boldness and technical expertise of Audemars Piguet at the turn of this last century. Made in a limited edition of just 150 examples, the present lot is an excellent opportunity for passionate collectors to own a rare and unusual "concept" watch showcasing the horological mastery of a storied Swiss watchmaker.