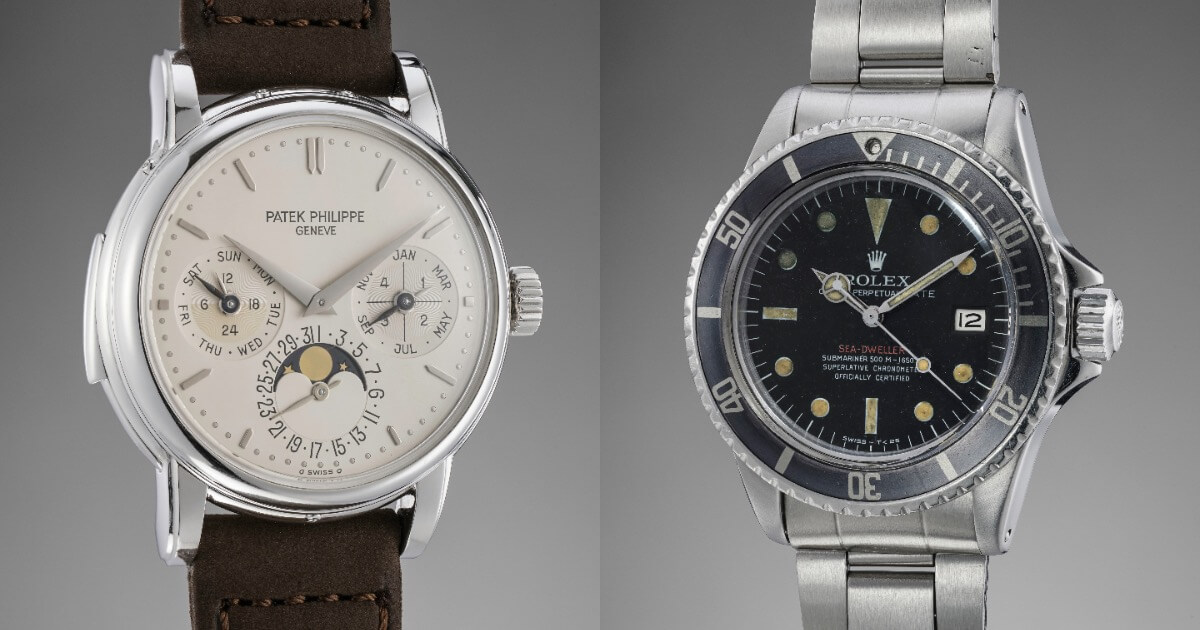 Following a record-breaking Spring auction season, Phillips in Association with Bacs & Russo, the global market leader in collectors’ watches, is delighted to unveil highlights from The Geneva Watch Auction: EIGHT.  Featuring over 220 lots, the auction will consist of two Evening Sessions, on Saturday and Sunday, starting at 5pm on November 10-11, 2018. The sale will take place at the Hotel la Reserve, in Geneva. It is free and open to the public.

As ever, collectors will discover an incredible selection of vintage watches, including a collection of early Rolex chronographs, from the early cushion-shaped examples made in the 1930s to the beloved Oyster Cosmograph Daytonas of the 1960s, offering a very interesting retrospective highlighting the company’s long and storied relationship with the complication. Leading this select group of chronographs is possibly the best-preserved example of a Rolex “Jean-Claude Killy” reference 6236 Dato-Compax in stainless steel.

Phillips is also proud to present a historically important Rolex “Single-Red” Sea-Dweller prototype without helium valve, which features in John Goldberger’s latest book, A Journey into the Deep, written in collaboration with Daniel Bourn.

Also on offer is a large selection of military-issued watches from various makers, including watches made for pilots, divers and decorated veterans from the Italian, American, Peruvian, Argentinian, UAE, Pakistani, and Israeli armed forces.

Further highlights include three of the most in-demand contemporary watches of 2018. Making their auction debut are two watches launch at Basel 2018 - the new Rolex “Rainbow” Daytona reference 116595 RBOW in pink gold and the new Rolex ‘Pepsi Bezel’ GMT reference 126710 BLRO in stainless steel. These will be offered alongside a newly made Patek Philippe reference 5711 in stainless steel with Tiffany-signed dial.

Highlights from Patek Philippe, Audemars Piguet, Vacheron Constantin, and other high-end manufacturers will complete the Geneva Watch Auction: EIGHT catalogue, including a selection of watches from the most coveted contemporary makers, such as Kari Voutilainen, Vianney Halter, and F.P. Journe, who will be represented in the sale by one of his original Tourbillon Souverain Souscription, a watch that helped launch the watchmaker’s brand.

Phillips invites all watch collectors to come meet our team and admire these exceptionally fine and rare timepieces ahead of The Geneva Watch Auction: EIGHT. We are confident our selection of watches will continue to fuel the remarkable passion that clients have shown in watches in recent years, and look forward to welcoming them to our previews later this month.

The Rolex Sea-Dweller is one of the world’s most eminent dive watches. Launched in 1967, it was originally conceived for diving expeditions. The example offered by Phillips is historically important as it is one of the very earliest prototypes tested in a “real life” underwater environment prior to official production launch. These prototypes were housed in Submariner style cases with and without a Helium Escape Valve, and with a new reference number engraved between the lugs and inside the case back: 1665.

As such, this model features an ultra-rare “Sea-Dweller” signature in red (as opposed to production pieces that had a double red signature on the dial and do not have a helium escape valve). It is believed that Rolex offered this watch to Robert Bradley, a naval pilot and marine biologist, in November 1968, to commemorate the 500th dive of the Deepstar-4000, a deep-sea submersible. In fact, the caseback shows traces of an engraving that has mostly rubbed off but where the name Bob and a date 11.08 remain distinguishable. As these watches were prototypes and used for intense testing, few have survived. Scholarship has found twelve existing “Single Red” Sea-Dwellers, seven of which do not have a Helium Escape Valve.

Today there are a handful of Day-Dates so rare that their very existence bewilders the most seasoned collectors. Known only to the horological cognoscenti, they are the antithesis of the opulent Day-Dates we know so well today. While the reference 6611 in stainless steel is arguably the "holy grail" of all Day-Dates, this prototype in stainless steel comes a close second.

This timepiece most notably does not have a reference or serial number, as it was never manufactured for commercial purposes. The movement number, 0005073, is incredibly close to another known example illustrated in 100 Superlative Rolex Watches by John Goldberger, which bears the movement number 0004547 and is almost identical in appearance to the present example. The other known example also does not bear any serial or reference numbers.

The case back bears all the signs of an undoubtedly correct Rolex factory component, such as the "Montres Rolex S.A. Geneva Switzerland" stamping, as well as the crisp milled satin finishes in the center. An important detail is the "STAINLESS STEEL" script, indicating that Rolex did indeed create stainless steel Day-Date cases.

The split seconds reference 1436 remained for decades the most complicated wristwatch made by the famed Geneva brand.

Reference 1436 is the first split seconds chronograph wristwatch that Patek Philippe ever produced in a series. Originally launched in 1938, the model was used as a "tool watch" to time horse or automobile racing, along with scientific experiments.

The present watch is not only one of these ultra-limited timepieces but it is only one of 16 known examples in yellow gold to feature applied Breguet numerals and as confirmed in the Patek Philippe Extract from the Archives.

The dial with Breguet numerals not only adds further collectability but adds amazing presence and charisma to the dial.

This timepiece is also part of an extremely low production run of 27 single-button chronographs of which 16 had an officer case like the present model.  It is not only collectible because of its exceptional condition and ultimate rarity, but also and perhaps most importantly because of its historical relevance.

A button at 2 o’clock enables the crown to be used for time setting.  The large double-hinged officer case houses a chronograph movement based on a Victorin Piguet ébauche featuring a column-wheel cover, an element that has become a Patek Philippe signature ever since.

Patek Philippe’s reference 3974 is the epitome of the famed brand’s technical and design prowess of the late 20th century.

The movement beating in the heart of this masterpiece is Patek Philippe’s caliber 27RQ, a 6.80mm thick movement comprised of 467 components. This ultra-complex mechanism is housed in a case whose downturned stepped lugs are reminiscent of another of Patek Philippe’s iconic timepieces: the perpetual calendar chronograph reference 2499. Patek Philippe turned to Jean-Pierre Hagmann (whose initials are proudly stamped inside the solid caseback and inner lug), a living legend among case makers, to create a case that would not only be a beautiful frame for the watch but could also act as a superb sound carrier for the repeater’s delicate chimes.

Patek Philippe discontinued this reference in 2000, and given how complex it was to manufacture, very few examples were made over its 11-year production period. In fact, the present example is only the eighth known in platinum.

Platinum is a metal known to dampen the sound of chimes in a repeating watch, however thanks to Patek Philippe’s technical expertise and Hagmann’s savoir faire, the chimes in the present timepiece are crystal clear, loud and extremely pleasant to the ear.  The present watch comes complete with rotating winding box, setting pin and additional solid caseback.