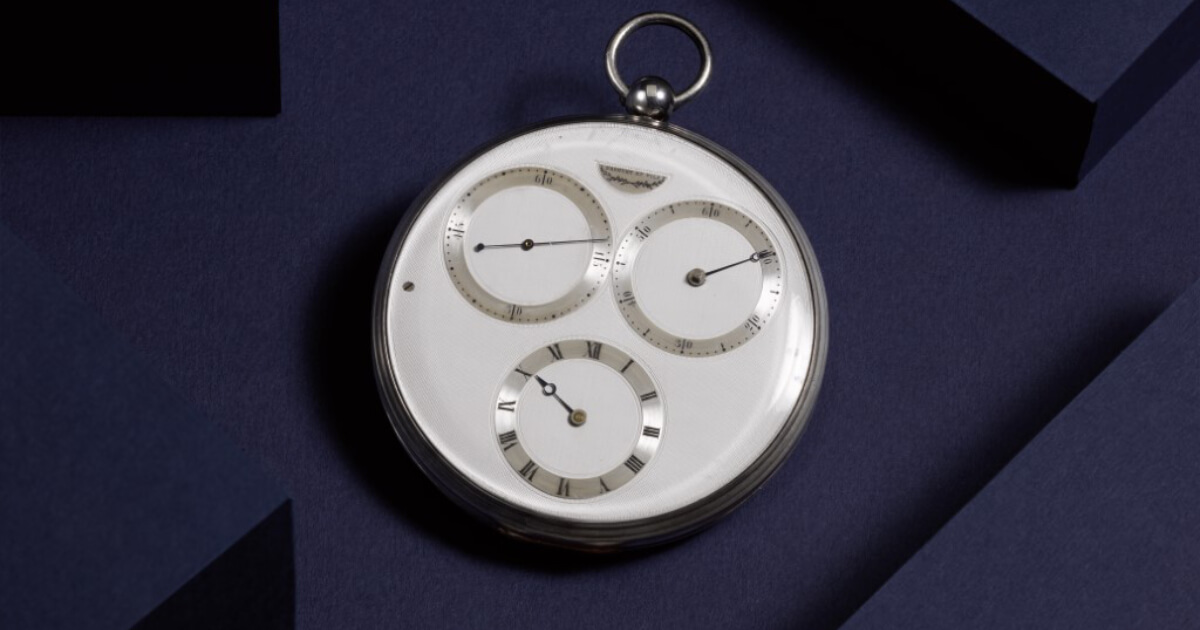 Next month, Sotheby’s will pioneer the first-ever online auction entirely dedicated to world-class pocket watches – a market that has never ceased to fascinate watch lovers and has recently seen a new surge of interest, with the return to fashion of fob watches. The sale, which will be open for bidding on sothebys.com from 3 until 16 June, is the third instalment of the legendary collection “Masterworks of Time” which set a swathe of records last year.

Entitled Abraham-Louis Breguet, Horologist extraordinaire, the 126-lot sale will showcase one of the most comprehensive offerings of timepieces by the father of modern watchmaking to appear at auction. It will be led by a masterpiece by Breguet (1747-1823), made in 1816 for Sir Thomas Makdougall Brisbane Bart, the Scottish General and astronomer who gave his name to one of Australia’s largest cities, Brisbane (est. CHF 300,000 - 500,000).

Daryn Schnipper, Chairman of Sotheby’s International Watch Division, said: “‘Masterworks of Time’ is an incredible collection that puts the spotlight on revolutionary geniuses whose inventions were vital catalysts in the history of horology, from Jehan Cremsdorff and George Margetts to Adolph Lange and George Daniels, to name a few. It is therefore hardly surprising that the man who put together this collection also had a fascination for Abraham-Louis Breguet. Breguet was a superstar pioneer, a perpetual innovator, admired and wooed by the intellectual and power elites of his time. I can’t help thinking that he would have enjoyed the idea of shaking up tradition and seeing some of his most ground-breaking creations beamed to every corner of the Earth in the first online sale ever dedicated to pocket watches.”

Emmanuel Breguet, seventh-generation descendant of Abraham-Louis Breguet, Vice-President of the Brand and Founder of the Breguet Museum in Paris, added: “Abraham- Louis Breguet is unique in the history of watchmaking. Throughout his life, he treated all the fields of watchmaking with an extreme originality and agility. The man who designed one of the most complicated watches ever known - the ‘Marie-Antoinette’ - and invented the Tourbillon, also excelled at the exercise of extreme simplification and designed the 'Souscription' watch, without doubt the “simpler” and most refined design ever made by a watchmaker.” (Extract from the introduction to the sale’s catalogue).

Abraham-Louis Breguet's contribution to the field of horology cannot be overstated. The sale is distinguished by a group of 18 watches, many of which were made during Breguet's most active period, from 1790 until his death in 1823. Together, they provide an overview of the French watchmaker’s greatest inventions, from his revolutionary tourbillon and his work on the “perpétuelle” (i.e. self- winding watch) to the “Souscription (Subscription) watch”, created to aid the recovery of his business after the French Revolution (lots 32, 33) and the tactful “montre à tact”, allowing gentlemen to check the time by touching their watch in their pocket and thereby avoiding a rude display of impatience (lot 29).

"The designs of Breguet's watches were so perfect and rational that they have never been improved upon, and eventually set the standards for the industry." George Daniels.

Started in 1810 and sold to Scottish military commander and avid astronomer Sir Thomas Makdougall Brisbane Bart on 23 February 1816 for 2,000 Francs, this oversized silver open-faced six-minute tourbillon watch with Peto's cross detent chronometer escapement, and regulator dial (no. b2574) has not been seen on the market for 34 years. At the time it sold for $210,000 (hammer price) in Sotheby’s New York’s 1986 sale of the Seth Atwood Collection, founder of the prominent Time Museum in Rockford Illinois. An indisputable demonstration of Breguet’s genius, it is wholly unsurprising that such a watch would appeal to a man of the intellectual calibre of Sir Thomas Brisbane.

Brisbane (1773-1860) was a keen supporter of scientific research. During his life, he built observatories in Scotland and in Australia, and his innovations to improve the accuracy of the longitude and latitude measurements for navigation were adopted around the world. As a soldier, he won the admiration of the greatest strategists of his time, including the Duke of Wellington, who once said about Brisbane and his peers: “Had I these men at Waterloo, I should not have wanted the assistance of the Prussians”. Brisbane served as the Governor of New South Wales in Australia from 1821 to 1825. During his tenure, he worked to reform the currency and land grants system, supported freedom of the press and created a settlement which was to become one of Australia’s biggest metropolises, Brisbane.

In his book The Art of Breguet, British watchmaker George Daniels said: "Breguet did not invent the perpétuelle but he certainly did perfect it”. This is admirably illustrated by this very rare gold “perpétuelle” or self-winding quarter repeating watch with moon phases, day of the week and power reserve (No. B60). The last time the watch appeared at auction, over 40 years ago, it set a world auction record for a watch at £57,000, in the sale of the collection of legendary watch collector Edward Hornby (Sotheby's London, December 1978).

Further Highlights In The Sale

This is amongst the most complicated watches ever made. With a total of 19 complications, the watch has just five fewer functions than the Henry Graves Supercomplication which was made by Patek Philippe a quarter of a century later. This large and heavy watch was the product of a unique collaboration between the English firm Dent, the Swiss company Capt & Cie. of Solliat and the watchmaker Leon Aubert of Le Brassus.

The latter two were tasked with producing the various complications, including a number of astronomical indications, such as the signs of the Zodiac, times of sunrise, sunset, moonrise and moonset, and moon phases with apparition of the Great Bear at the black moon. The watch leads a group of fascinating double-dialled watches from the late 18th to the early 20th century.

Patek Philippe Treasures For The Americas

A further highlight in the sale is an ensemble of eight storied watches made by Patek Philippe & Cie. for the South and North American markets. Each of them was made at the turn of the 20th century, except the most important piece: The “Patek Philippe Heures Universelles”.

Patek Philippe’s “Heures Universelles” watches are among the most coveted vintage pieces by the prestigious Geneva manufacture, and examples form the centrepiece of some of the world's most important watch collections. Reference 605 was one of the earliest models to incorporate the ingenious world time system developed by the famed watchmaker Louis Cottier. Production began in 1937 and continued for approximately thirty years, during which time

fewer than one hundred pieces were made. Research suggests that three-quarters of the Ref. 605 watches made were delivered in yellow gold cases, with just one quarter in pink gold. From the late 1940s onwards, Patek Philippe began to commission a very small series of richly coloured cloisonné enamel dials, as seen in this masterwork from 1948. This watch is one of seven known references 605 “Heures Universelles” with a map of North America.