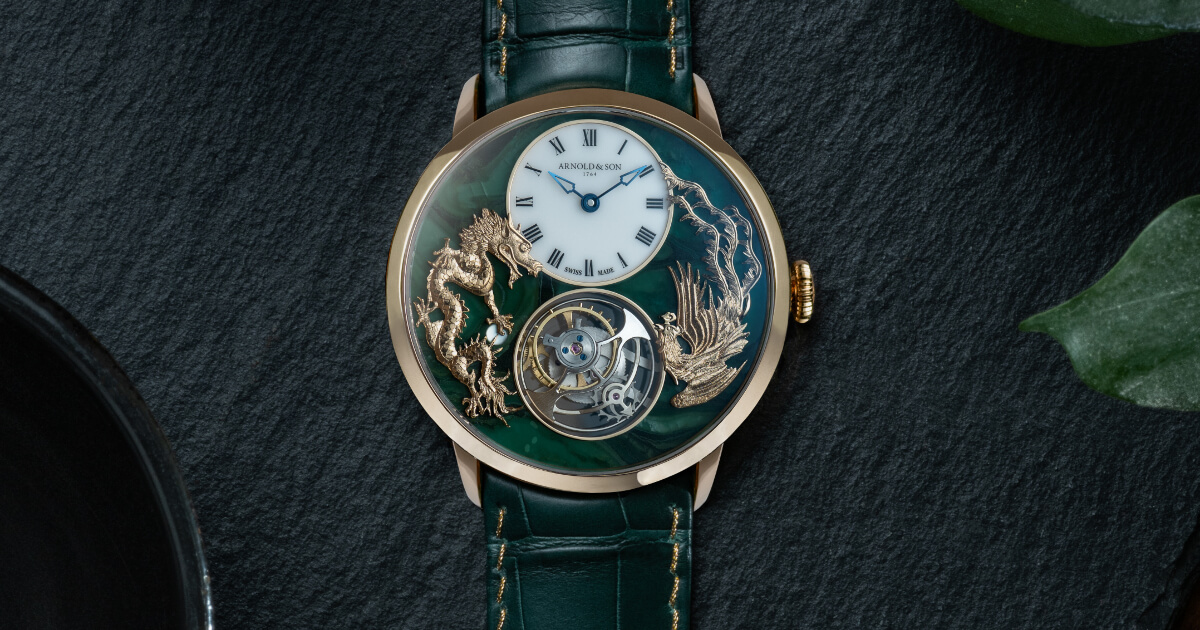 By merging mineral with myth, Arnold & Son is adding a new dimension to its thinnest tourbillon. The five versions of the Ultrathin Tourbillon Dragon & Phoenix, each released as an edition of five pieces, feature dials made from rarely used varieties of hardstone. Their structure, colour and richness serve as a backdrop for the two legendary creatures as they dance around their prized pearl.

Off-centred dials can be found on several models from the Arnold & Son collections. This arrangement is both the historical heritage of the marine chronometers created by John Arnold in the 18th century and a consequence of the mechanical structure of Arnold & Son’s manufacture calibres. A fortunate consequence of this arrangement is that it naturally lends itself to artistic expression. Arnold & Son has produced a series of 25 pieces, based on its Ultrathin Tourbillon model, that pair figures from Chinese mythology with the best Swiss expertise.

Arnold & Son references the myth of the Dragon and the Phoenix. These fantastic creatures were neighbours who decided to make a pearl together, one using its talons, the other its teeth. The jewel was the extraordinary product of their equally impressive magic powers. Stolen by the mother of the Jade Emperor, it fell down from the heavens and the animals rushed to catch it in mid-air.

This pearl of wisdom and fertility is the essence of the Ultrathin Tourbillon Dragon & Phoenix tale. The two beasts are depicted by two expressive, precious finely worked miniature sculptures curled up on either side of the dial. Complete with scales, feathers, spurs, teeth, beak and mane, they are entirely crafted from solid rose gold and engraved by hand. In the dragon’s claws is the pearl, made from mother-of-pearl. The level of detail is extraordinary, all the more so as these two animals are only around 2 cm long. In the background, Arnold & Son introduces colour and substance: the stone.

Each of the five Ultrathin Tourbillon Dragon & Phoenix models features a dial made from a different hardstone. Bronzite, Eudialyte, Marcassite, Pietersite and Verdite are coloured minerals with deep surface effects but are little known and rarely used in watchmaking. Arnold & Son chose these varieties of hardstone for their evocative properties. In Bronzite, pearlescent, red and black inclusions stand out against predominant beige tones. Black and grey Marcassite is scattered with outgrowths like stones emerging from a flat landscape. The deep blue grey of Pietersite is crossed by expansive iridescent clouds. Verdite, meanwhile, reveals a bright, shifting green. Lastly, intense Eudialyte contains gradients of purple opposing mottled white veins.

Each of these versions comes with a large-scaled alligator skin strap that matches the dial, paired with 18-carat gold thread topstitching. The strap attaches to a 5N red gold case measuring 42 mm in diameter and 8.60 mm thick. This thinness is all the more remarkable as the Ultrathin Tourbillon Dragon & Phoenix models incorporate a tourbillon calibre.

It simultaneously offers accurate timekeeping, a refined skeletonised structure, mechanical nobility and, for good measure, a symmetrical architecture. The symmetry of the pieces even extends to the domed sections: the skeletonised tourbillon bridge slightly protrudes from the dial, level with the off-centred dial, which is also domed. Meanwhile the mythical creatures carved from gold balance out the design horizontally. The precise proportions, the dynamics and the composition are the product of a keen aesthetic and mechanical sense.

Beneath the rare stone dials lies the A&S8200 calibre. Measuring 2.97 mm thick, it is one of the thinnest to be regulated by a tourbillon. Like all the movements used by Arnold & Son, the A&S8200 calibre was entirely developed, produced, decorated, assembled, adjusted and cased up within the walls of the brand’s manufacture in La Chaux-de-Fonds.

This calibre is based on a large barrel with an oscillation frequency of 3 Hz, giving a 90- hour power reserve that is extremely rare for a tourbillon, especially given its thinness. The structure is re ned further still by the skeletonised tourbillon bridge and hand engraving on the rear tourbillon bridge. As the light passes through the Ultrathin Tourbillon Dragon & Phoenix, it illuminates the mythological scene and brings the mechanical lacework into the mineral landscape.

·       Crystal: domed sapphire with an anti-reflective coating on both sides

The price for the Arnold & Son Ultrathin Tourbillon Dragon & Phoenix is CHF 99,000 (excluding tax) and is limited edition to 5 pieces for each model.