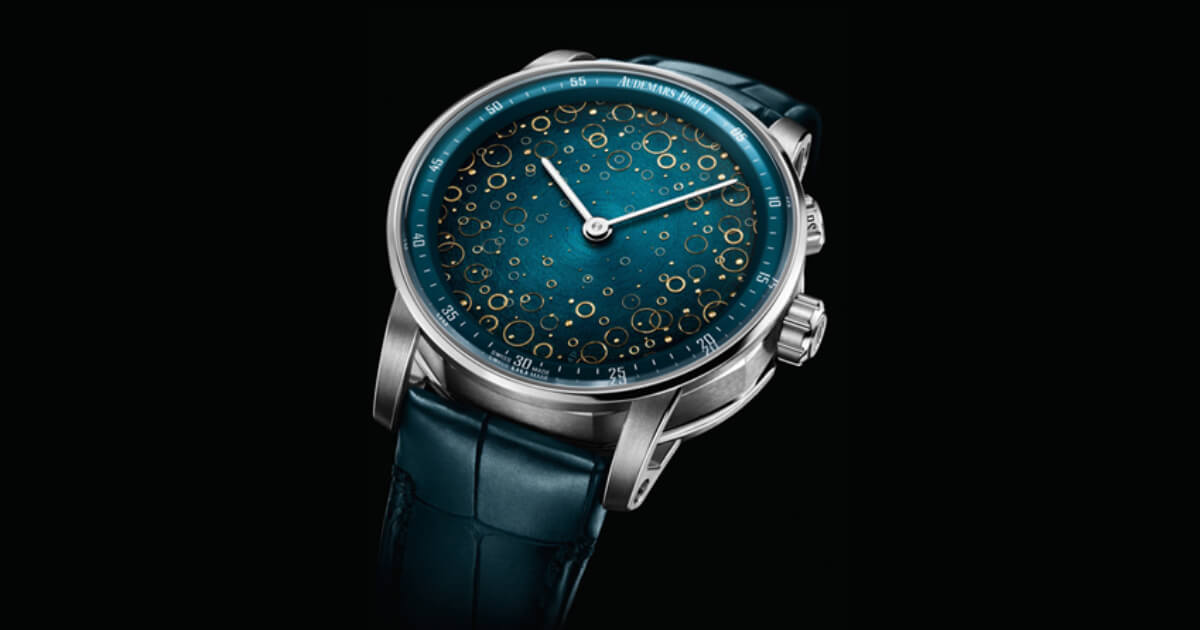 The Swiss Haute Horlogerie manufacturer brings the Code 11.59 by Audemars Piguet collection a step further with the release of five Grande Sonnerie Carillon Supersonnerie timepieces, each endowed with a unique bespoke enamel dial crafted by Anita Porchet and her atelier. These re ned wristwatches pay tribute to generations of craftspeople who have continuously leveraged pioneering technologies, while never losing sight of their ancestral craftsmanship.

Chiming watches bring us back to the origins of time measurement devices: invented in the 14th century, striking clocks chimed time exclusively as they were devoid of dials. Audemars Piguet has specialised in chiming mechanisms since its establishment in 1875 and crafted complex Grande Sonnerie, Petite Sonnerie and Minute Repeater mechanisms ever since. Today, only a handful of specialised watchmakers at Audemars Piguet are trained to assemble and adjust a Grande Sonnerie, which is considered as one of the most sophisticated complications in the history of Haute Horlogerie.

Anita Porchet’s artistic work and know-how have been praised by some of the most respected Haute Horlogerie manufacturers in Switzerland, her re ned enamel dials adding an artistic touch to the complicated timepieces they adorn.

For the remaining two pieces, clients have the possibility of requesting a personalised enamel dial crafted by Anita Porchet’s atelier.

A Refined Complication At The Junction Of Tradition And Innovation

The Code 11.59 by Audemars Piguet Grande Sonnerie Carillon Supersonnerie houses a new hand-wound movement, calibre 2956, which unites the traditional Grande Sonnerie complication with the patented Supersonnerie technology introduced by the Manufacture in 2015 in the Royal Oak Concept collection. This complex calibre of 489 components testifies to Audemars Piguet’s uncompromising spirit.

A Grande Sonnerie timepiece not only strikes the hour, quarters and minutes on request as a traditional minute repeater would do. Like a bell tower, it can also strike the hours and every quarter hour by default, without any involvement from the wearer. A carillon means that the Grande Sonnerie Supersonnerie is endowed with 3 gongs and hammers instead of 2 on a standard chiming watch and therefore strikes the quarter hour with three successive notes (high, middle, low) instead of two. In the Petite Sonnerie position, the watch chimes the hours only, while the automatic chiming is deactivated in the silent mode. As for the minute repeater mechanism, it can be activated by the wearer at any time.

The added Supersonnerie mechanism grants this complicated wristwatch the acoustic performance of pocket watches. This patented technology is the result of 8 years of research in collaboration with the Swiss Federal Institute of Technology Lausanne (EPFL). Inspired by the sonic power of older minute repeater watches as well as by the harmony of musical instruments, a dedicated community of watchmakers, technicians, academics and musicians reviewed the case construction to produce a new chiming technology.

The Supersonnerie’s acoustic power, sound quality and harmonic tone are granted by patented gongs and case construction. The gongs are not attached to the mainplate, but to a new device acting as soundboard, which improves sound transmission. This innovative Supersonnerie technology also provides a sharper tempo.

“The Grande Sonnerie is the acme of chiming watches. Like an orchestra, the synchronisation of components has to be perfect to guarantee the automatic chiming of the hours and quarters. It took us 4 years to meet the challenge of combining this traditional mechanism with our Supersonnerie technology, which we endowed with the Carillon function (3 gongs)”. - Lucas Raggi, Development Director.

Dials Between Artisanship And Art

“What fascinates me with this craft, is the 360° of possibilities and creations it offers, like a painter in front of a blank canvas. By collaborating with Audemars Piguet, I benefitted from a larger freedom in the exploration and contemporary reinterpretation of the ancestral ‘paillonné’ technique, which has provided me with an enriching vision”. - Anita Porchet, Swiss Enameller.

In a nod to the enamel Grande Sonnerie masterpieces that were crafted in the Vallée de Joux between the 18th and 19th centuries, Audemars Piguet has collaborated with Swiss artisan enameller Anita Porchet for the first time on a trilogy of “Grand Feu” paillonné enamel dials hand-crafted with ancestral savoir-faire and tools.

Each “Grand Feu” enamel dial is unique due to the organic nature of its materials, as well as the hand manufacturing technique and distinctive cooking time. A thin layer of glass sand mixed with water is applied by hand on the gold dial, before being heated at more than 800°C in a dedicated oven. The procedure is repeated multiple times to achieve remarkable transparency, depth and light. Each cooking session necessitates different temperatures and times; a perilous procedure requiring extensive knowledge of colour alchemy.

Inspired by Code 11.59 by Audemars Piguet’s unconventional design, Anita Porchet has explored new creative possibilities by decorating each contemporary “Grand Feu” enamel dial with antique hand-crafted gold spangles, at least a century old. Each spangle was meticulously cut and curved in thin gold leaves with antique tools and techniques—a craft no longer perpetuated today. The enameller has carefully incorporated each spangle by hand onto the dial’s enamelled plate before fusion in the oven. The dial is then covered with a thin layer of transparent enamel for a mirror polish finishing.

By revisiting this antique paillonné enamel decoration in the contemporary context of the Code 11.59 by Audemars Piguet, Anita Porchet echoes the interweaving of traditional savoir-faire and forward thinking at the heart of the Manufacture’s craftsmanship. For Anita Porchet, as for Audemars Piguet’s  nishing experts, perfection is in the details and the tiniest nuances are often invisible to the eye.

To complement this dial trilogy, Anita Porchet’s atelier is also at the disposal of clients to craft a personalised enamel dial of their choice.

As for the manufacturing of its complex mechanism and enamel dial, the Code 11.59 by Audemars Piguet Grande Sonnerie Carillon Supersonnerie’s 18-carat white gold case surprises with its contrasting details and re ned hand-finishing techniques usually found on calibres.

The case’s ergonomic curvature and seamless combination of an octagonal middle case with a round extra-thin bezel and stylised arched lugs made the conception, manufacturing and decoration of each component particularly intricate. Complex programming, dedicated tools and specialised human talents had to be combined for the industrialisation and hand-finishing of the components. The case’s juxtaposition of angular and rounded surfaces has presented a real challenge to the manufacturer’s finishing experts. The perfectly aligned alternation of satin-brushed and polished surfaces adorning the case is only achievable by hand.

Since its establishment in 1875, Audemars Piguet has specialised in complicated watches. Records show that more than half of the 1625 watches produced between 1882 and 1892 included a chiming mechanism. This achievement can be attributed to the remarkable skills of the craftspeople working for the Manufacture across dozens of workshops in the Vallée de Joux. Considered as one of the most sophisticated and complicated mechanisms, the Grande Sonnerie was rare. Only 28 Audemars Piguet watches featured a Grande Sonnerie between 1882 and 1892.

In 1892, in collaboration with Louis Brandt & Frère, Audemars Piguet crafted the first minute repeater wristwatch (29.3 mm or 13 lignes in diameter) ever produced featuring two hammers set at a distance that could strike the hours, quarters and minutes on request. This was made possible thanks to the watchmakers who met the challenge of adapting and miniaturising complicated mechanisms for women’s diminutive pendant watches. From 1892 to 1957, the Manufacture created 35-minute repeater wristwatches. None of these wristwatches included a Grande Sonnerie due to its mechanical complexity.

While the production of chiming pocket watches never stopped at Audemars Piguet, production of chiming wristwatches slowly diminished with the Great Depression of the 1930s and the Second World War. By the 1960s, chiming mechanisms were exclusively featured in pocket watches. Chiming wristwatches made their return at Audemars Piguet in the 1990s, following the revival of other classic complications in the aftermath of the quartz crisis.

The return of Audemars Piguet Grande Sonnerie mechanisms was notably marked in the 1980s by the release of five masterpieces made by Philippe Dufour, a young independent and free-spirited watchmaker from the Vallée de Joux, whom the Manufacture supported for his talent and devotion to the preservation of the region’s craftsmanship.

Audemars Piguet launched its first Grande Sonnerie wristwatch in 1994, a remarkable achievement for a calibre of 28.6 mm in diameter and 5.2 mm in thickness. 188 wristwatch calibres featuring a Grande Sonnerie were thereafter produced between 1995 and 2002.

“The creation and continued chiming watches have been an Audemars Piguet since the birth of the company. The latest chapter of this ongoing story has arrived in the form of the unparalleled Grande Sonnerie Carillon Supersonnerie – a distinct evolution of the innovative minute repeating Supersonnerie technology introduced by Audemars Piguet in 2015. Whereas a classic minute repeater will only chime when activated by the user, the new Grande Sonnerie Carillon Supersonnerie is capable of boldly chiming the hours and quarter hours on its own accord with absolute clarity, far-reaching resonance and pure musicality”. - Michael Friedman, Head of Complications at Audemars Piguet.

The watch is limited edition to 5 pieces, each with a unique dial and will be available only at Audemars Piguet boutiques.