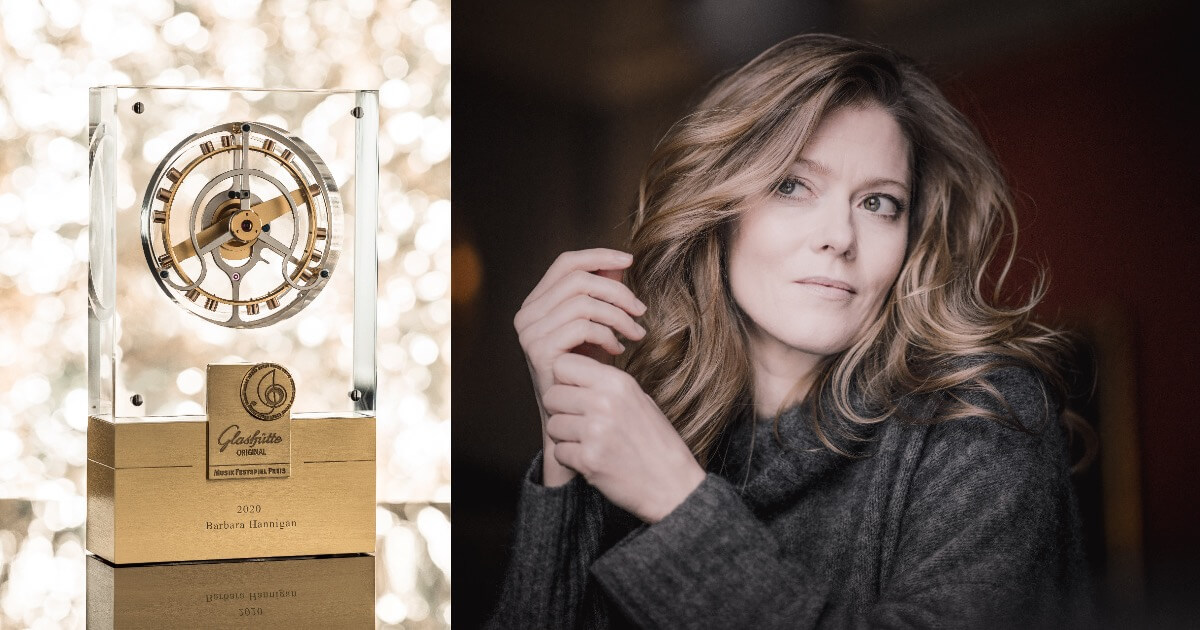 The soprano and conductor Barbara Hannigan have been chosen as this year’s recipient of the Glashütte Original MusicFestivalAward, which will be presented for the 17th time in 2020. The award, worth 25,000 Euros and accompanied by a trophy made by two apprentice watchmakers, honours the artist from Canada for her passionate commitment to the support and advancement of music, and in particular for her mentoring program, “Equilibrium Young Artists”.

Due to the cancellation of this year’s Dresden Music Festival, the award ceremony will not be held during a public concert. Instead, Dresden Music Festival artists will participate in “Music Never Sleeps DMF”, an online event in which their performances will be streamed live for 24 hours.

Barbara Hannigan, one of the most charismatic personalities among musicians today, has been awarded the 17th Glashütte Original MusicFestivalAward. The Saxon watchmaker and the Dresden Music Festival honour the Canadian for her exceptional stage projects and her passionate commitment to supporting young artists.

“It is a very important time to support our younger colleagues, to encourage them and to mentor them. This moment, when the Glashütte Original MusicFestivalAward happens, I can say it goes directly to young artists in the first phase of their career. I think it is a sign of hope and a sign of encouragement for them. We are saying: We want to hear you, we want to hear your voices, we want to hear what you have to say, we want you to work, we want you to develop your projects and your dreams. It is a time when we embrace our community, and we try to help each other. I am extremely grateful, and I am very hopeful”, says Barbara Hannigan.

Dresden Music Festival Intendant Jan Vogler underscored the soprano’s exceptional creativity: “Barbara Hannigan is a creative volcano! She is one of the most innovative artists in the world of music today. Especially exceptional and impressive is the fact that since the beginning of her career she has dedicated herself with such intensity and spirit to furthering the development of young musicians. This makes her an ideal choice for the Glashütte Original MusicFestivalAward, which honours artists who transmit cultural experiences in a lively manner to the younger generations.”

Managing Director and CFO of the German watchmaker, Frank Kittel, emphasised that, “As a manufactory rich in tradition we know from experience how important it is to pass on valuable knowledge, passion and dedication to young people. As a consequence, every year the award honours an artist whose music has not only moved an international audience across the generations, but who has invested a great deal of her time and energy to help develop young talent.”

With the nomination of Barbara Hannigan, the Dresden Music Festival and Glashütte Original have joined forces to honour, for the 17th time now, an exceptional figure in the world of music who has made an extraordinary contribution on behalf of classical music.

The Canadian soprano and conductor join the ranks of previous award winners, among them the mezzo- soprano Joyce DiDonato, Sir Simon Rattle and the Berlin Philharmonic, the fado singer Mariza, the conductor Andris Nelsons and the cellist Steven Isserlis.

Every year two students from the watchmaker’s own “Alfred Helwig” School of Watchmaking create the trophy, whose design combines traditional craftsmanship and modern materials. The Flying Tourbillon is considered to represent the highest levels of the watchmaker’s art and was developed exactly 100 years ago by the ingenious Glashütte watchmaker, Alfred Helwig.