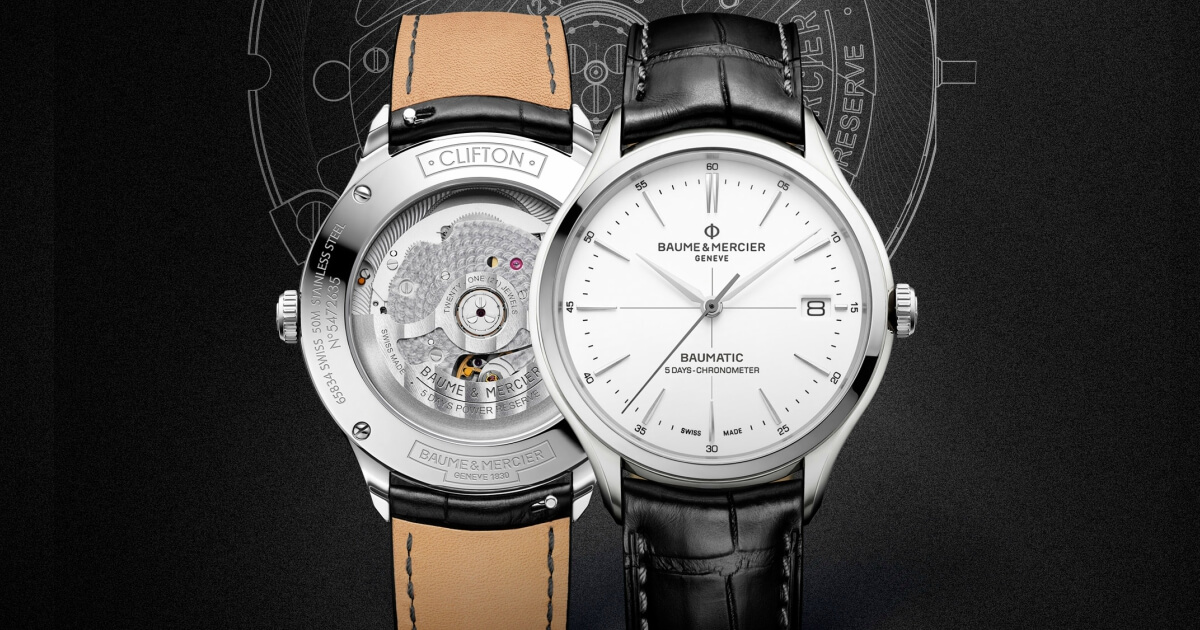 Baume & Mercier has taken a fresh, in-depth look at mechanical watches in order to improve their performance and make them available to as many people as possible. The result: Baume & Mercier has achieved this ultimate luxury with the Clifton Baumatic, offering an array of outstanding characteristics.

An epitome of advanced watchmaking, the Clifton Baumatic developed by Baume & Mercier fulfils every aspect of Célestin and Louis-Victor Baume’s motto: "Accept only perfection. Only manufacture watches of the highest quality." This elegant and contemporary steel timepiece with a 40 mm case and a refined white dial with a porcelain finish, making it truly of its time as well as a watch for the future. More importantly, is the Clifton Baumatic is powered by a revolutionary mechanical self-winding caliber: simple, powerful and accurate, it is endowed with the most advanced watch technology available today.

Developed in-house in collaboration with the ValFleurier Manufacture and the R&D team at the Richemont Group, this self-winding 12½’’’ new-generation movement has been named the Baumatic (cal. BM12-1975A). This first-ever Baume & Mercier movement is the result of the brand’s commitment since it’s foundation in 1830: to offer the best value-for-money compromise between efficiency and performance.

This expertly manufactured movement, visible through the case back and assembled in the traditional manner, features several innovative components that increase its power reserve, accuracy and reliability. The 120-hour (5 days) power reserve is achieved thanks to the optimized alloy used for the barrel, the escapement with Powerscape™ technology, and the Twinspir™ silicon hairspring. These same elements help ensure an accuracy of between four seconds slow and six seconds fast per day.

Thanks to the greatly improved reliability, maintenance services become less frequent. This is achieved by using new types of oils that can withstand major variations in temperature. It is also achieved by the use of parts that are not sensitive to powerful magnetic fields (1,500 Gauss), meaning the watch will withstand radiation at levels 25 times higher than traditional instruments. Lastly, the use of proven materials such as the silicon hairspring with Twinspir™ technology, and the new antimagnetic “bumper” bearing the Baume & Mercier “Phi” logo for a subtle signature detail, helps to improve the watch’s accuracy and durability in everyday conditions and reduce the need for maintenance interventions.

The advent of the Baumatic™ movement represents the Richemont Group’s first combined introduction of a silicon balance-spring and a high-performance escapement.

Silicon facilitates longer maintenance service intervals for both the watch and its movement.

The hairspring, the anchor, the escape wheel of the Baumatic™ BM12-1975A movementare made from silicon.

The new hairspring is endowed with the TWINSPIR technology also developed by the Richemont Research & Innovation teams. Twinspir™ technology is applied to a new hairspring with a composite structure, combining two cores of silicon, alternately set at a 45° angle and bound by a silicon dioxide layer that also plays a role in ensuring thermocompensation.

Combined with a newly shaped variable-inertia balance wheel, it delivers the following benefits: Improved accuracy of the movement various positions and over the long term; Reduced sensitivity to magnetism; Greater resistance to small impacts and repeated vibrations.

A Baumatic movement resistant to the magnetic fields of daily life.

According to this standard, a watch is considered antimagnetic if it is able to withstand a magnetic field of 60 Gauss (4,800 A/m) while maintaining a precision of +/- 30 seconds per day.

The Baume & Mercier Clifton Baumatic™ watch  is resistant to at least 1500 Gauss without residual effect. Twenty-five times higher than the current norm.

Available in four classic designs or as a COSC-certified chronometer for a slightly higher price, the Clifton Baumatic sets a new standard in luxury watches. This timepiece, with its understated elegance, is ready to defy time itself, delivering accuracy and durability in operation, available to everyone at the fairest price.