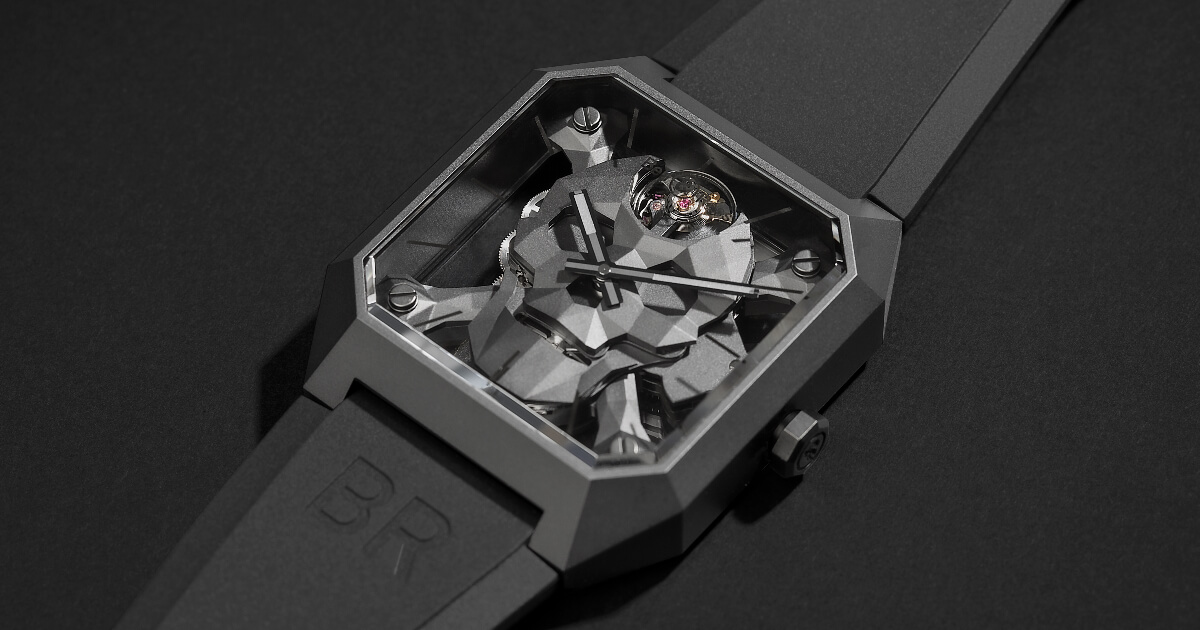 It all started in 2009. Bell & Ross likes to break the mould and relentlessly explore new worlds. That same year, the brand made a big impact with the launch of its BR 01 Skull, which dared to shake up traditional watchmaking codes.

From the Vikings of the first millennium to the paratroopers of the Second World War, including the pirates of the 17th and 18th centuries, the skull has always been a very prominent warlike symbol. Historically, the most formidable fighters displayed their bravery by wearing skulls, both to upset their opponents and to ward off bad luck.

Pirates flew their Jolly Roger atop the masts of their boats, terrorising ships’ crews struck by this black flag emblazoned with skull and crossbones. At dawn on 6 June 1944, during the Normandy landings, paratroopers from the 82nd and 101st American Airborne Division emerged from the night wearing a badge on their jumpsuit that bore a skull and these words: Death from Above. The series of Skull watches by Bell & Ross pays tribute to these experienced and outstandingly courageous military personnel.

The Bell & Ross Skull family is approaching its tenth anniversary and has become an iconic collection with around ten of its creations all becoming collector’s items.

The BR 01 Skull was one of the first to follow in the footsteps of this skull trend, with many manufactures later following suit. This first collection also included two versions set with 415 and 672 diamonds.

This unprecedented version combined military symbolism and the art of tattooing. Its case, engraved with sparks, was decorated with a black lacquer reminiscent of the ink used by tattoo artists.

The Skull family welcomed a new skull watch, fitted with one of the brand’s automaton movement. The jaw of the skull on its dial appeared to smile when activated.

Generally speaking, skull watches from the Bell & Ross Skull family are rather traditional. The new BR 01 Cyber Skull marks a break with style. It turns a page. Its avant-garde design sends this iconic series into the future. Not only that, the Bell & Ross brand as a whole has launched itself towards an ultra-modern shape. The futuristic Cyber Skull opens a door to the future.

With its cut sides and sharp edges, the angular silhouette of the BR 01 Cyber Skull is reminiscent of that of certain fighter planes described as invisible. Its case is modelled like the fuselage on an F117 fighter plane. To disappear from the radar and seem invisible, these bombers had faceted fuselages that waves would ricochet off. All their surfaces were faceted, making them almost undetectable to radars. This stealth technique is also used on the most sophisticated military ships, in order to conceal their visual identity as much as possible.

Bell & Ross has chosen to adorn its Cyber Skull with black matte ceramic. This anti-reflective colour is also used on some military vehicles. Its glazed superstructure is reminiscent of the canopy on a jet. More than just a colour, the new black matte used on the watch gets its depth from a ceramic used to match its design. Its lines, structured like those of a fighter plane, pass under the radar and establish a new language.

In sharp contrast to classic watchmaking shapes that favour curves and roundness, the architecture of the new Bell & Ross BR 01 Cyber Skull exonerates it from traditional design and allows it to establish its creativity. All whilst respecting its military and aviation roots.

Each element of the watch, the case middle, bezel, crown, skull, crossbones, is structured within the many faces that sculpt the surfaces, creating volumes and a 3D image. To escape the radar but attract attention.

In the same way an artist creates works that are interpreted in their own way by each person that views them, the new Bell & Ross BR 01 Cyber Skull reveals itself fully through the experience of those who wear it.

Like a highly pixelated image, the Skull reveals several sides of the same reality. Emphasised by its sharp edges, its many facets offer a fascinating play on the multiplication of perspectives, between flat and smooth surfaces. Futuristic origami? Memento mori 2.0? New cameo by a cyborg? The Bell & Ross BR 01 Cyber Skull produces a multifaceted approach.

In a break with the vintage style in fashion up until then, it adopts a very futuristic, angular style. Indeed, it may evoke a similarity to Japanese origami, the ancestral art of folding.

The geometric shapes of the Cyber Skull create a pixilation effect. This phenomenon appears when the points of an image become clear. The angular representation of the skull and the tibia bones on the dial are inspired by this. There is no doubt that the faceting of lines is a nod to the digital arts. When a digital image is still, you can see the pixels that it is made up of.

Its extremely modern lines echo contemporary art and in particular a certain avant-garde trend. Many artists produced works related to this faceted representation of reality. Their works question our relationship with speed, sound and light.

The stunning lines of the sharp edges on the Bell & Ross BR 01 Cyber Skull also play with the light. Its crystal mirror dial and ceramic skull in the centre reflects the light. As an innovative work of its time, the BR 01 Cyber Skull raises questions by capturing people’s eyes. Trapped between two pieces of sapphire crystal, the screwed-down skull and crossbones and the animated jaw seem to levitate. A phenomenon amplified by the middle of the faceted case with no lugs, also made from black matte ceramic.

Inserted in the imposing volume of the case, the rubber strap is stamped with «BR», like a seal heralding a contemporary mythology. Endorsing the ultimate paradox of black which allows it to affirm the light whilst absorbing it, the Bell & Ross BR 01 Cyber Skull invites all possibilities. Whether a collector or newcomer, Jedi Knight or Sith Lord, everyone can have their own adventure.

Behind its provocative, symbolic and artistic face, the Bell & Ross BR 01 Cyber Skull hides the secrets of an automaton watch belonging to the world of Haute Horlogerie. Only perfect mastery of the operation of a mechanical movement could, in reality, conceal the BR-CAL 206 hand-wound movement under the faceted decoration. To make it invisible to the eye, the main plate closely follows the shape of the skull, while the bridges extend up to the four corners of the case, hidden by the tibias. An architecture like this makes the skull appear to float weightlessly inside the case. An impression which is enhanced by the total transparency of the dial, highlighted solely by 12 baton-shaped indices. Only when the watch is turned over is the key to the mystery revealed through the sapphire crystal case-back.

In addition to the hour and minute indication, the automaton movement activates the jaw which opens and appears to snigger when the spring is wound. Making up the brain of this skull - which has finally come to life - the balance spring reveals its oscillations. The beating of the same, serves as a reminder of the watch’s mechanical heart.

Bell & Ross chose ceramic to create this BR 01 Cyber Skull, a high-tech material that is solid yet lightweight, both for the case and the decoration. Compounded by the brute force of the material, the aesthetic force of the timepiece merges technologies together. Fired at an extremely high temperature, the ceramic acquires a density and resistance not dissimilar to black matte, a colour that cannot be achieved with traditional watchmaking materials. Grinding using diamond powder meant the facets could be resurfaced, in the same way jewellers cut a precious stone. In order to maintain the purity of its design, the lugs have disappeared and the housing for the rubber strap has been cut out of the volume of the case, measuring 45 mm x 46.5 mm.

Since it was founded, the brand has paved the way and progressed step by step. The release of the BR 05 last year marked a major change. This elegant sporty chic watch changed the brand’s graphic charter. It meant it was able to launch this futuristic and disruptive Cyber Skull. It maintains a strong link with aeronautics. Its angular design as well as matte colours are reminiscent of military stealth bombers.

The shapes of the Bell & Ross BR 01 Cyber Skull consist of a multitude of facets. Its sophisticated lines reflect the complex personality of this futuristic timepiece. This spectacular piece increases angles, and points of view. It is a contemporary, avant-garde or arty watch, just as much as it is a Skull or military one. The BR 01 Cyber Skull is multifaceted, multiverse and multi-talented.

This new piece in the Bell & Ross skull family, is rooted in the world of design. The angular shapes of the Cyber Skull break tradition with neo-vintage trend Skull watches often belong to. Its geometric lines are part of the same futuristic universe as those of cars or art.

The Cyber Skull fits in perfectly with this style. It is characterised by the stylised and angular treatment of the skull on its dial. The human body however, skeleton and skull included, do not have angles. They only have curves. However, the skull on the Bell & Ross timepiece swaps its natural curves for geometric and angular shapes. The brand’s designers were not aiming to reflect the reality but to create a sensation.

Its case is inspired by the original BR 01 but its contours have been revised with sharp edges that give it an ultra-contemporary look. The Cyber Skull also plays with light and transparency. In some ways, it is similar to the architecture of today. Avant-garde buildings play with the sky, they reflect it to make sure they blend in.

Avant-garde and sculpted, the Bell & Ross BR 01 Cyber Skull reinvents the style of the skull watch. Unifying, it can move art lovers and aesthetes in the same way it can move watch collectors. This ultra-modern watch pushes the watchmaking brand into the future. It opens a door towards... new horizons.

Not belonging to any set family, the BR 01 Cyber Skull lays claim to avant-garde Haute Horlogerie. Breaking with tradition, it finds its raison d’être in the rich history of the Bell & Ross Skulls family which was launched in 2009 and broke traditional watchmaking codes. The symbol of a new generation, the Bell & Ross BR 01 Cyber Skull embodies the story of a successful conclusion. The story of a brand for whom each detail has a meaning and purpose.

·       Functions: Hours and minutes. Moving skull when wound by hand