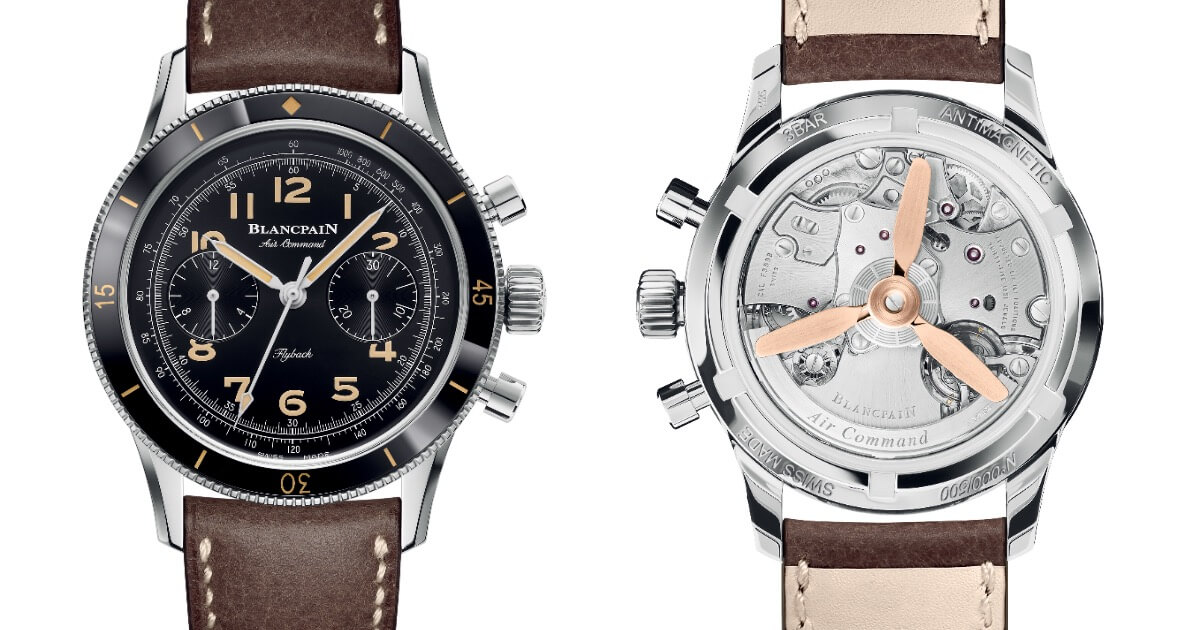 The Blancpain Air Command chronograph belongs to the select circle of legendary watches whose very rareness exacerbates their appeal to collectors. While its creation remains something of a mystery and has generated a variety of stories, its military vocation is a certainty. Considered superior to that of other timepieces of this type, its design is likewise universally admired. Blancpain is now reissuing this legendary model in a 500-piece vintage style edition and the arrival of this major new model in the brand's collections testifies to a part of its history.

In the early 1950s, the French Ministry of Defence was looking for a high-precision chronograph capable of meeting demanding specifications. The watch to be selected must have a black dial with luminous hour-markers and hands to maximise legibility. The movement must be equipped with a flyback function, as well as a small seconds hand. A few years later, other armed forces began looking for a similar instrument. Blancpain, which had already won over the American Navy with its Fifty Fathoms diver's watch, drew inspiration from it to develop a chronograph for the United States Air Force. This timepiece was offered to American military pilots through the distributor Allen V. Tornek, for whom Blancpain is thought to have created a dozen watches as prototypes. The total production of Air Command chronographs was probably very limited.

Renowned as the most sought-after military chronographs of the late 1950s, the Blancpain Air Command model has now been given a new lease of life. The 2019 edition exudes a style that is singularly faithful to that of the original. In keeping with its forerunner, intended at the time for pilots of the most modern aircraft of the era, it is equipped with a ratcheted “countdown” rotating bezel. Once set before flight, this feature enables instantaneous reading of the exact time when the fuel reserve is no longer sufficient for the plane to continue its trajectory. The time scale of the bezel, as well as the dial hour-markers and hands, are made of “old radium” type Super- LumiNova, reproducing the orange hue of the original chronograph indications. The model bears a 30-minute totaliser at 3 o’clock and a 12-hour counter at 9 o’clock, while a tachymeter scale running around the chapter ring indicates speeds based on a 1000-metre distance.

In order to enhance the readability of the information and accentuate the majestic nature of this collector's watch, Blancpain has improved the dial opening compared to the original model.

The face of the new Air Command is protected by a sapphire box-type crystal, a distinctive characteristic of the watches from this period that also appears on the back of the watch – a first for Blancpain. The 42.5 mm-diameter steel case thus reveals a snailed movement notably graced with a contrasting propeller-shaped red gold oscillating weight.

A legendary timepiece deserved an equally prestigious calibre. The new Blancpain Air Command is powered by the F388B movement, whose high frequency of 5 Hz is perfectly adapted to its functions, since it enables each second to be divided into tenth-of-a-second intervals. This high frequency ensures greater accuracy, especially when timing events. Another advantage of the F388B movement is a vertical clutch that provides the chronograph seconds hand with a smooth start, as well as optimally seamless stop and start functions. It has a column- wheel system, which remains the exclusive preserve of high-end chronographs, particularly because it gives a velvety feel when starting or finishing a measurement and returning the hands to zero. The flyback function enables instantaneous zero-resetting and restarting.

The price for the Blancpain Air Command is CHF 18,500.