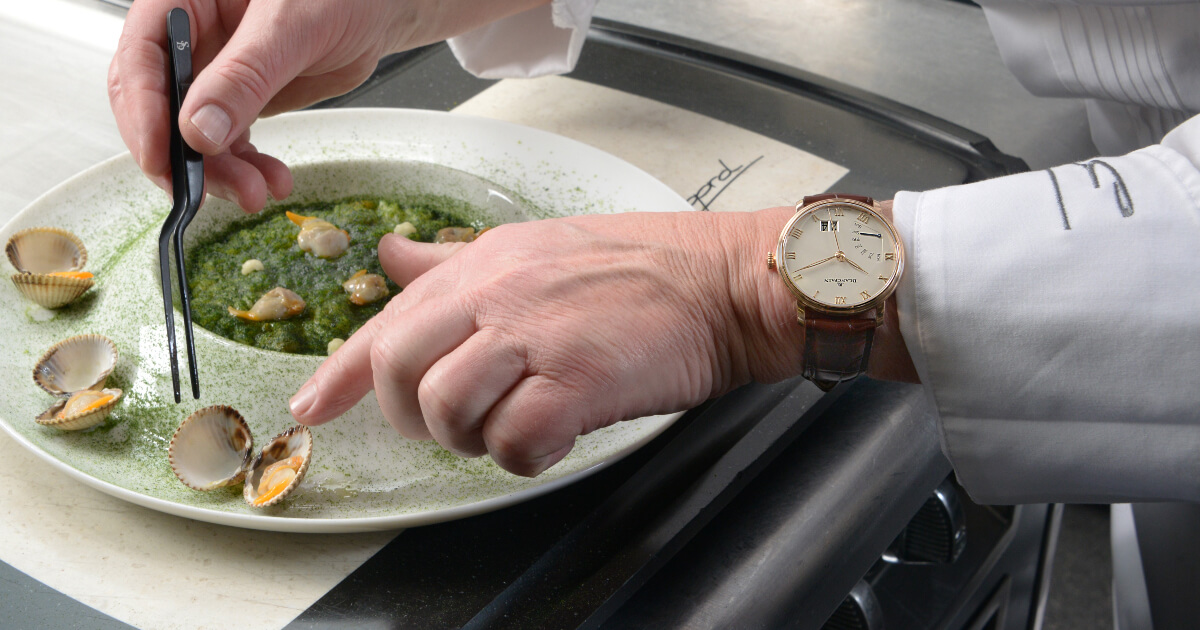 Blancpain partners with the Michelin Guide

Blancpain is delighted to announce its association with the famous gastronomic Michelin Guide. This three-year global partnership is a natural extension of the close ties binding the watch Manufacture and the world of haute cuisine for more than 30 years.

In addition to its roles as official timekeeper of renowned culinary contests and reviewer of the world's finest restaurants in its corporate magazine "Lettres du Brassus", Blancpain has adorned the wrists of famous chefs for more than three decades. Surrounded by a circle of friends, past and present encompassing more than 100 Michelin stars, the Manufacture is now expressing its close connection with the famous Michelin Guide through a new collaboration. Blancpain and the Michelin Guide thus intend to work together in promoting their touchstones of excellence, passion and expertise.

This long-term and wide-ranging partnership will make its mark on the international gastronomic scene. Every year, more than 20 events and guides will celebrate haute cuisine, from Shanghai to Paris via New York and Tokyo, to mention only a few locations.

Haute Horlogerie and haute cuisine share a similarly rigorous discipline: the quality of a Blancpain timepiece and of a gourmet dish both rely on precise adjustments along with a subtle blend of tradition, creativity and authenticity. Watchmakers and great chefs alike demonstrate a fascinating ability to assemble a wealth of components and ingredients so as to create masterpieces. Time, moreover, plays a crucial role in the preparation of a refined delicacy. As a faithful curator of time for almost three centuries, Blancpain will accompany the Michelin guide in its quest to seek out the most exceptional talents.

Founded in 1735 by Jehan-Jacques Blancpain in the Swiss Jura, Blancpain is the world’s oldest watch brand. Loyal to its tradition of innovation and confirmed by countless horological complications invented over the years, the Manufacture is constantly pushing the boundaries of watchmaking to take this art to places where it has never been before.

The encounter between the world of haute horlogerie and haute cuisine, between Blancpain and the Art of Living is entirely self-evident, whether in terms of their common attachment to fine craftsmanship, the importance placed on product quality, or the respect for terroir and traditions.

This is the reason why Blancpain cultivates special ties with the greatest award-winning chefs. It all began in 1986, well before the current craze for haute cuisine, when the brand offered its friend Frédy Girardet a specially engraved watch upon winning the “World’s Best Chef” award. Three years later, Blancpain reiterated its commitment when the latter, along with Paul Bocuse and Joël Robuchon, were named “Chefs of the Century”.

The Manufacture honored them at the time by giving each of them an engraved watch commemorating the occasion. Since then, Blancpain’s circle of friends has continued to grow and now includes new names on the international gastronomy scene, including the Spanish chef Martín Berasategui, Edgar Bovier of Switzerland and Julien Royer from the Auvergne region of France, all of whom have been awarded stars in the Michelin Guide.