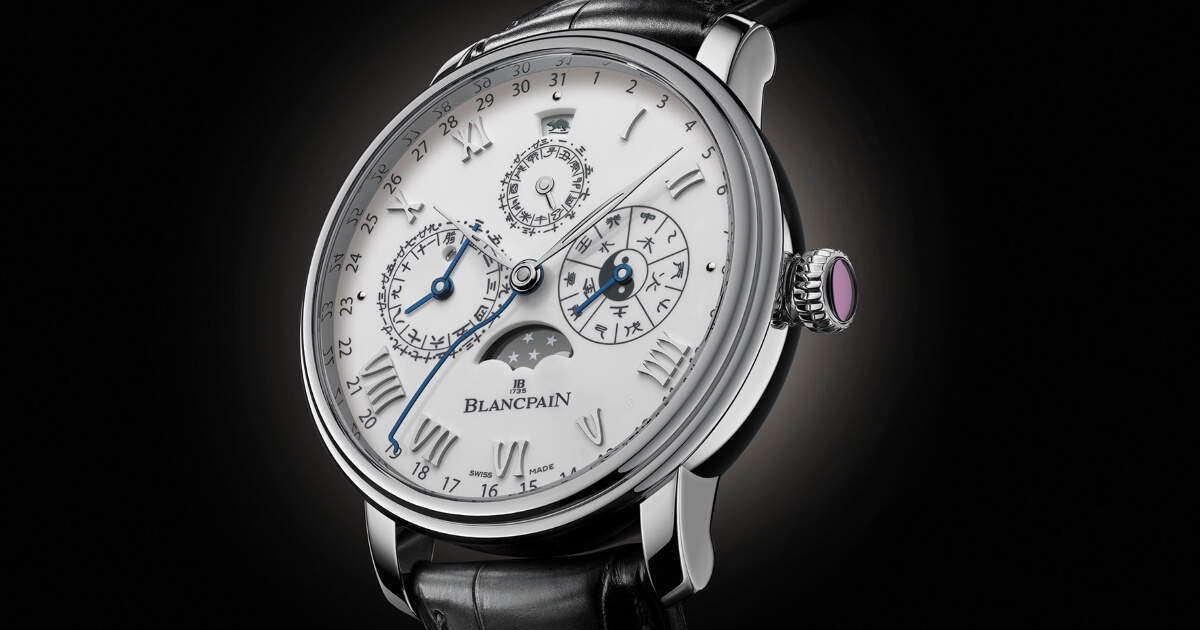 Blancpain's Traditional Chinese Calendar is a watchmaking masterpiece combining the fundamental principles of the age-old lunisolar calendar stemming from Chinese tradition with the date according to the Gregorian calendar. To celebrate Chinese New Year, the Manufacture is unveiling a new limited edition of this Complication featuring the Rat, the first animal of the Chinese zodiac, which heralds a year of luck and prosperity.

With the Traditional Chinese Calendar, Blancpain took up the challenge of mechanically combining two different interpretations of time. Five years of research and development were required to associate within this timepiece the main indications of the Chinese calendar as well as the date based on the Gregorian calendar. Given that the basic unit of these two time-division systems is not the same, this represents a real technical feat. While the Gregorian calendar is based on the solar day, the lunisolar Chinese calendar is based on the lunar cycle, composed of 29,53059 days.

A year of 12 lunar months is about 11 days shorter than a solar year. In order to maintain consistency with the seasonal cycle, a leap month is added to the Chinese calendar every two to three years. This distinctive feature is the reason behind the variability of the Chinese New Year date. But the complexity of this calendar does not stop there, since it uses a system of subdividing the day into 12 double hours, thus replacing the 24 hours composed of 60 minutes each featured in the Gregorian calendar. Each of these double hours is named, in successive order, after one of the twelve earthly branches and represented by one of the animals of the Chinese zodiac.

All this information can be found on the white Grand Feu enamel dial of Blancpain's Traditional Chinese Calendar. The animal of the year, the Rat, appears in a window at 12 o'clock. Below is the double hours counter displayed in numbers and symbols. The ten celestial pillars and five elements are displayed at 3 o'clock, while two hands at 9 o’clock serve to read the month and date. They are complemented by an aperture dedicated to the leap months.

The moon phases, which are used to determine the months of the Chinese calendar and represent an emblematic element of Blancpain's calendar models, are highlighted in a window at 6 o’clock. Finally, the date according to the Gregorian calendar, associated with these indications, is read off around the rim of the chapter ring by means of a blued steel serpentine hand.

This timepiece, which is even more complex than a perpetual calendar, is driven by the self-winding 3638 movement. The latter is distinguished in particular by a seven-day power reserve made possible by the use of three series-coupled barrels, equipped with high-performance springs. It is secured against inappropriate manipulation of the functions and equipped with a silicon balance-spring.

This exceptional movement is housed in a 45 mm platinum case featuring a crown and oscillating weight adorned with a cabochon-cut ruby. It incorporates five under-lug correctors – a patented Blancpain invention – enabling easy fingertip adjustment of functions without the need for a correction tool.

The refined and timeless aesthetics of the Villeret collection can be seen in the double stepped bezel of the case, as well as on the dial bearing gold appliques for the Roman numerals and hands shaped like cut- out sage leaves.

Issued in a 50-piece limited edition, this timepiece features a white gold oscillating weight engraved with the Chinese zodiac sign of the year, the Rat. Each is entirely assembled and meticulously adjusted by hand by a single master-watchmaker in the Grandes Complications workshop of the Manufacture in Le Brassus.

The Blancpain Villeret Traditional Chinese Calendar Ref. 00888H-3431-55B is limited edition to 50 pieces and is available only in Blancpain Boutiques.