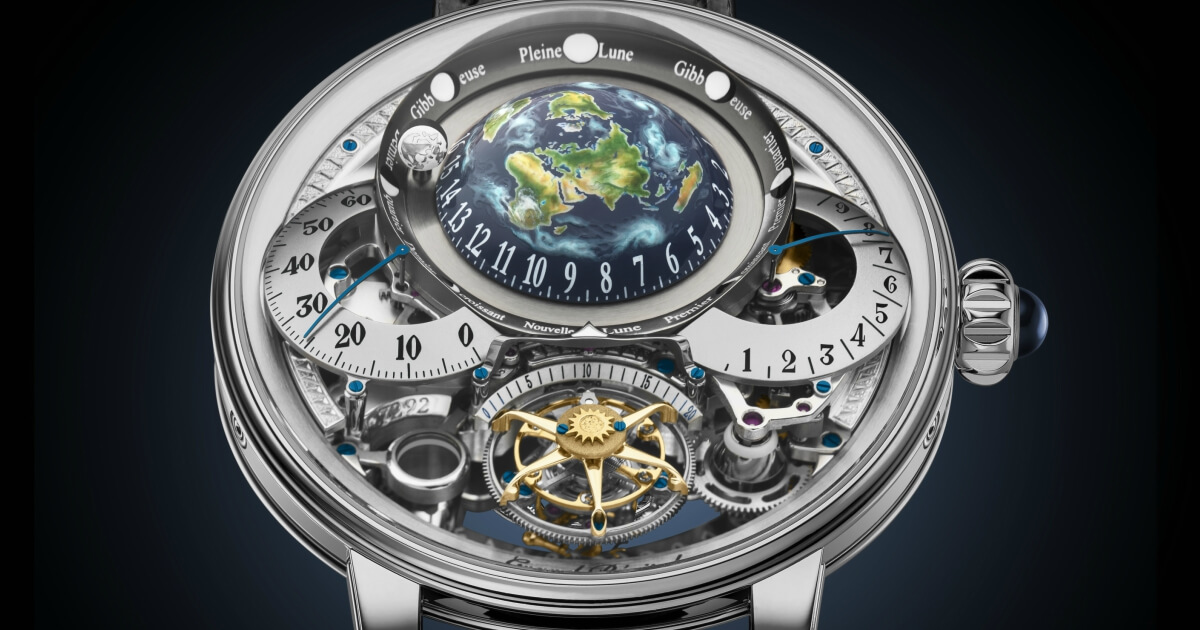 In 2016, BOVET astonished collectors with the unveiling of the Récital 18 Shooting Star tourbillon, which revolutionized watchmaking design by combining its movement with a registered design asymmetrical case. A year later, BOVET reprised this incredible celestial timepiece with the Récital 20 Astérium , which borrowed the Récital 18’s innovative case, original architecture, and intuitive display of astronomical indications.

Just as the cosmos knows no bounds, so too, the infinite scope of BOVET Owner Pascal Raffy’s imagination takes its latest form in a newly formed trilogy of celestial timepieces. The Récital 22 Grand Récital tourbillon forms the third chapter in the poetic watchmaking narrative begun by Pascal Raffy and the Maison’s artisans two years ago. Together, they now invite us to observe the three heavenly bodies that set the pace of our lives: the sun, earth, and moon.

This grand astronomical theater has been presented by BOVET in a Tellurium-Orrery, with the sun represented by the flying tourbillon, whose carriage bridge evokes fiery rays. The striking hemispherical earth rotates on its own axis and shows the hours on a natural 24-hour cycle. Finally, a spherical moon orbits the earth according to the exact length of its synodic period, i.e. 29.53 days.

To accentuate the splendor of the sun, the tourbillon carriage has been raised above the surface of the movement. Its original patented construction is characterized by its central attachment, endowing the piece with exemplary chronometry, while achieving a peerless level of transparency. Meanwhile, the five arms of the titanium carriage bridge surround the regulating organ. This three-dimensional representation of the sun showcases the finish of the bridge’s five arms, rounded by hand, which subtly frame the timepiece’s celestial decoration. By rotating once every sixty seconds, the tourbillon indicates the seconds by a hand affixed directly to the carriage wheel and travels over a scaled twenty-second sector.

The earth is represented by a hemisphere on the Récital 22, the surface of which is adorned with an engraved and hand-painted map, on which the oceans, mountains, deserts, and forests are executed in painstaking detail. The difficulty of working on a hemispherical surface is compounded by the use of a technique unveiled by BOVET in 2017, in which the artisan incorporates luminescent substances into the miniature painting. In this way, the earth becomes a radiant highlight in the dark, as the earth itself appears in the heavens above. The artisan’s work continues with extreme delicacy, applying several successive layers of transparent lacquer to the globe’s surface before it is polished.

To enhance the sense of realism, the artist painted clouds and air currents onto the globe’s surface. As they are separated from the earth’s crust by the thick layers of lacquer, the clouds appear to be floating in mid air. As in reality, the earth naturally performs one anti-clockwise rotation every 24 hours. At the base of the globe, a graduated scale displays the hour by means of a three-dimensional polished titanium hand, situated between the tourbillon and the globe.

The scale of the artisanal and artistic craftsmanship present on these hemispheres is reason enough to consider each of the 60 timepieces in this limited edition a unique piece. Yet Pascal Raffy wanted to offer collectors even more. He therefore wanted BOVET to allow collectors to choose the orientation of the painted world map so that the collector’s chosen location would be positioned on the earth-sun axis when the timepiece displays midday. This customization option means that each movement and timepiece is assembled once the collector’s special requests have been received. This customization also makes it possible to determine where it is currently nighttime in the world thanks to the black and white coloring of the ring surrounding the earth. This concave circular indicator, widened at the bottom to display the hour, demonstrates the masterful skill of the micro-mechanics responsible for its manufacturing.

The moon is represented by a sphere that makes a complete orbit once every 29.53 days exactly, which corresponds to the synodic period of our natural satellite. The high-precision mechanism that powers the moon and moon phase display, also visible on the Earth’s concentric ring, means that it will register a discrepancy of just one day every 122 years. The sphere is divided into two parts: one black, while the second is engraved with the textured surface of the moon. The engraved sections of the second half are filled with a luminescent substance, which makes it possible to clearly see which part of the moon is directly illuminated by the Sun. This rare combination of indications is the subject of one of the five patents protecting the movement of the Grand Récital.

To bring further harmony to this celestial spectacle, the retrograde minute and power reserve indications are displayed on hemispherical sectors curved to mirror the globe. Sapphire glasses situated in their centers magnify the mechanisms underneath, each seemingly transcending the spatial confines of the case.

Lastly, a circular aperture is positioned on the left-hand side of the tourbillon carriage. Its metal bezel also contains a magnifying glass, which makes it possible to read the date displayed on a glass disk circulating on the lower section of the movement. To emphasize the date, a ring machined directly from solid luminescent material highlights the inner edge of the aperture. It is symmetrically positioned in relation to the upper cone ring and the power reserve wheel, which is made from the same material.

However, to admire the full extent of the ingenuity infused throughout this timepiece by Pascal Raffy and the BOVET technical teams, it must be observed from all angles. Reversing the timepiece and looking through its large sapphire crystal, the viewer beholds a vast bridge decorated with circular Côtes de Genève, centered around the tourbillon’s axis. Various apertures open onto the hour, day, month, and leap-year indicators, and a glass date disk guided by the bridge, which is displayed on both sides of the movement. This combination of indications acts in concert as a sort of mechanical brain that governs the perpetual calendar. This clever decision by BOVET watchmakers ensures optimum accuracy in the display and setting of the time reading and all the Tellurium functions.

Specially designed and developed for the Grand Récital, the perpetual calendar is brimming with innovative features, including the original addition of a patented, double-sided date disk display. It is driven by a retrograde mechanism with a micrometric rack, also patented, which optimizes operation while reducing the amount of required space. The abrupt accelerative and decelerative forces acting on the date disk, when combined with the inertia of its mineral crystal material, led the watchmakers to develop a regulator train that dissipates the energy when the disk retrogrades.

As Pascal Raffy is a firm believer in useful complications and remains ever-conscious of collectors’ convenience, he asked the Manufacture’s technical office to design a mechanism to simplify the entire perpetual calendar’s adjustment. Needless to say, the patented solution chosen by the Maison’s technicians is sure to delight a large number of collectors. In addition to the traditional correctors used to adjust each indication individually, they designed and developed a pushpiece located between the upper lugs that simultaneously adjusts all the timepiece’s functions. Therefore, if the timepiece has been stopped for six days, for instance, this pushpiece can be simply pressed six times to perfectly adjust the perpetual calendar and Tellurium functions simultaneously.

In terms of technical characteristics, a single barrel supplies the 472 components of this complex caliber, while providing a power reserve of over nine days. As they are renowned specialists in long power reserves, BOVET’s watchmakers know that it is more important to save energy than to add it when one is looking to improve the autonomy of a caliber. The secret to their success is the systematic selection of traditional and artisanal manufacturing methods. A multitude of details – including hobbed teeth, traditionally burnished pivots, and flawless finishes on every component – come together to form the foundations of the excellence embodied by BOVET’s manufacture movements.

A double-sided flying tourbillon was chosen to regulate this caliber. This patented construction improves chronometric performance by significantly reducing the lever arm at the point of attachment and intelligently distributing mass. The sprung balance and escapement are positioned on either side of the central attachment point in an atypical architecture that also enhances the piece’s aesthetics, as it renders the tourbillon’s attachment to the movement practically invisible. Meanwhile a variable-inertia balance wheel, paired with a balance-spring manufactured in BOVET’s workshops, ensures the accuracy of the movement by oscillating at 18,000 vibrations/hour.

The case’s design, inspired by the shape of a writing slope and measuring 46 mm in diameter, is inseparable from the structure of the movement. This unique architecture opens a new window on the three-dimensional interpretation of time displays developed by Pascal Raffy and the BOVET watchmakers. The case is available in red gold or platinum. As is now customary at BOVET, the Récital 22 Grand Récital will be presented as a limited edition, restricted to the number of movements produced. Therefore, whatever the final form of the timepiece, only sixty Grand Récital movements will be issued by BOVET’s workshops.

Pascal Raffy’s vision of the fundamental values of fine watchmaking involves masterful techniques and timekeeping, decorative arts, and customization in harmony with traditional manufacturing procedures. Taken to new heights by the Maison, these values are harmoniously combined to give collectors the noblest and most poetic expression of time. These values are evidenced throughout the celestial trilogy introduced by BOVET, culminating in the new limited edition Récital 22 Grand Récital.