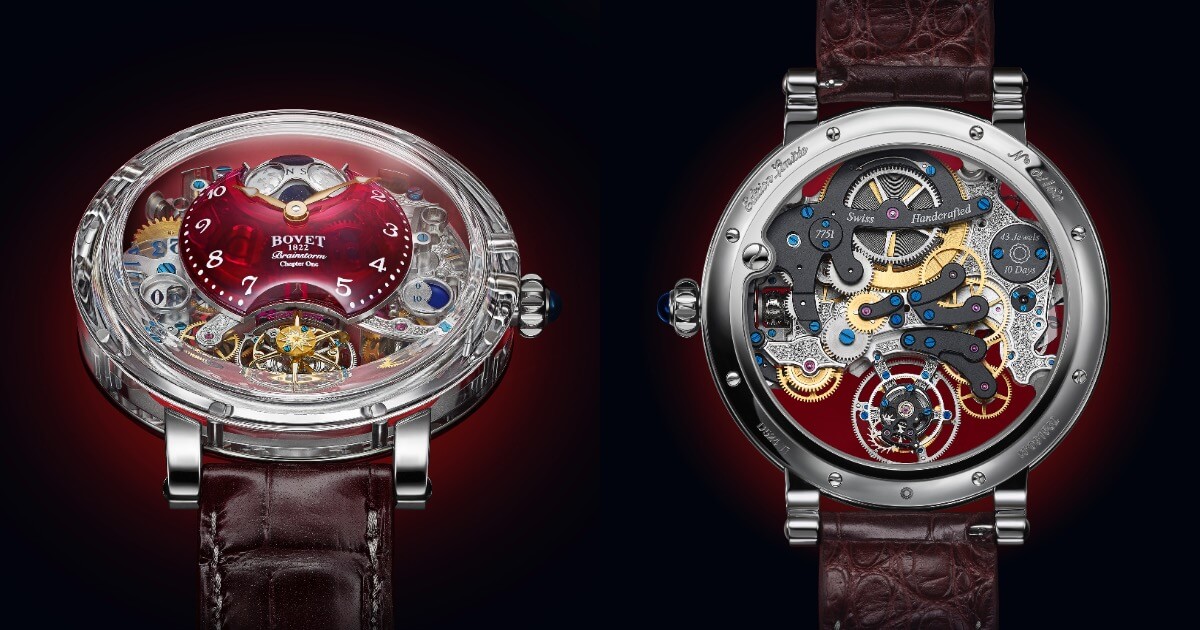 To begin the year 2020, Mr. Raffy, owner of Bovet 1822, wished to commemorate the three international distinctions awarded in a few months to the tourbillon Récital 26 Brainstorm Chapter One, by manufacturing an exclusive edition of only 10 timepieces, characterized by a sumptuous hemispherical dial sculpted from a block of red quartz.

This exceptionnal timepiece presents a host of innovations and gives a glimpse of the scope of the unprecedented possibilities for interpreting timekeeping offered by the "writing slope" case. For this first Brainstorm chapter, Mr. Raffy wanted a sapphire model. Chosen for its crystalline transparency, sapphire is also the second hardest material known after diamond. The lightness of sapphire is also unsurpassed, and in fact weighs less than titanium. This novel choice represented a major challenge for Maison Bovet's technicians. While sapphire cases have been in use for almost forty years, their designs have, up to present, remained relatively simple, due to the machining and polishing constraints posed by this extremely hard material. The asymmetric profile of the middle, bezel, and glass of the "writing slope" case confronted engineers and technicians with hitherto unresolved difficulties.

The middle and glass ultimately form a single element that conscientiously respects the original design of the collection’s inclined cases. The back consists of a bezel and four horns that have been machine-cut from grade 5 titanium. It goes without saying that this bezel features a sapphire glass that opens generously onto the back of a movement and reveals a wealth of secrets. In order to optimize transparency and ergonomics, Bovet 1822's watchmakers decided to fasten the movement in the back rather than inside the middle as is usually the case. They had already successfully experimented with this choice in the construction of the Tourbillon Ottantasei in 2016.

The movement chosen to occupy this three-dimensional panoramic showcase is regulated by the patented double face flying tourbillon, which appeared in Bovet’s 2015 collections. Four years later, the movement has evolved and today features a variable inertia balance for even greater chronometry through the use of a traditional hairspring. Mastery of hairspring production sets Bovet apart, a rarified science mastered by very few watchmakers. This new caliber draws its energy from a single barrel that guarantees 10 days' power reserve despite numerous animated complications.

Bovet 1822 watchmakers' long-standing expertise in long power reserves — for which they hold the absolute record, with a pocket watch manufactured in 1900 that offers 370 days' power reserve — is explained by their constant concern to minimize friction at the heart of the movement. The use of artisanal methods and the care taken with each detail represent the main reasons for this energy control. They summarize the philosophy that drives the Manufacture's technical office, based on the idea of saving energy rather than adding it, so as to increase the power reserve. The solution to the problem caused by the winding time is provided by the doubly patented spherical differential winding system that halves the number of turns of the crown required to wind the timepiece completely.

On the strength of this exemplary chronometric performance, Brainstorm displays the hours and minutes offset at 12 o'clock. As it is the highest section under the case's pronounced dome, the watchmakers have manufactured a special high hand-fitting. An index screwed onto the carriage wheel along with two of the carriage bridge's arms follow one another 120° apart, crossing the graduated seconds sector in a main dial milling. The gilded titanium carriage bridge alone requires two days' work by a single artisan solely for its decoration.

To accentuate the transparency of the case, the power reserve is displayed via a printed cam that shows the energy available through a "crescent-shaped" indicator placed at 4 o'clock.

Positioned symmetrically at 8 o'clock, a big date almost mysteriously appears in a circular aperture. The entire mechanism is revealed to the collector's eye, who will be able to appreciate its finest details through the use of the sapphire units disk that provides the necessary transparency.

At 12 o'clock, nestled in the volume of the hours and minutes dial, arises a three-dimensional moon phase, whose dome's camber masterfully counters the curves of the dial. For heightened realism, the lunar dome's surface is engraved, and the lower sections filled with Superluminova®. The sky is represented here in its finest expression. Bovet 1822's dial-makers have achieved an impressive feat by setting two circular aventurine glass plates in the pronounced curve of the hemispherical moon phase indicator. The moon phases are thus read with a striking realism through the two circular apertures that overlook the dome.

The dial of this new timepiece is a pronounced red quartz dome whose transparency allows the collector's eye to roam unencumbered over the movement's different layers.

Although the complications and their unprecedented configuration are particularly dazzling and fully justify the use of sapphire for this case, the latter must be pivoted to observe the movement from the side and appreciate its greatest secret. From this perspective, we immediately note the movement's atypical construction. The movement, entirely developed and manufactured in Bovet 1822's offices and workshops, reveals a stepped architecture whose succession of inclined planes carries all the movement's mobiles and components. This exclusive choice offers a host of advantages from many angles. First of all, it makes it possible to optimally fill the volume of the middle's V-shaped profile for enhanced ergonomics and an aesthetic worthy of the most demanding criteria in fine watchmaking craftsmanship. Each indication hinges on an axis perpendicular to the bezel's inclined plane, offering the best legibility from the most natural angle and positioning on the wrist.

This specific construction in sapphire created a set of unprecedented difficulties for all the artisans. Micro-engineers, decorators, dial-makers, and watchmakers together succeeded in meeting the many challenges presented by this new case material in the Récital 26. Mr. Raffy paid them homage by christening this new watchmaking feat Brainstorm, which evokes both the solutions found collectively and the stroke of genius required to resolve the many unique situations in a project that has become a reality.

The Tourbillon Brainstorm Chapter One is limited to sixty movements. But only ten exclusiv timepieces adorned with a red quartz dial will be manufactured.

And what about the Chapter One subtitle in this timepiece's description? It hints that Mr. Raffy's abundant imagination still has many areas to explore the scope of the possibilities offered by the "writing slope" case's unprecedented design.

Limited Edition: to 60 movements including 10 with red quartz dial

The price for the Bovet Récital 26 Brainstorm Chapter One is CHF 325,000 limited edition to 60 pieces.