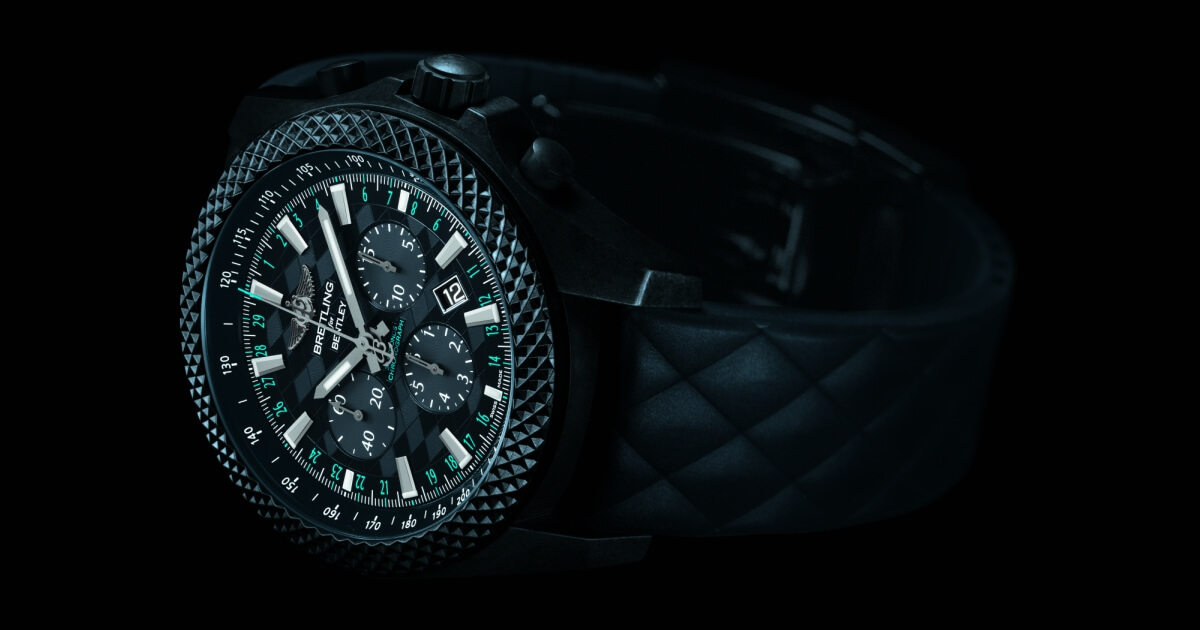 With its ultra-light chassis made of Breitlight enhanced by bluish "Dark Sapphire" tints, and its exclusive engine equipped with a "30-second chronograph", the Bentley GT watch pays a vibrant tribute to the all-new Bentley Continental GT unveiled by the British manufacturer. An exceptional instrument issued in a 500-piece limited edition.

A dramatic new interpretation of the classic Bentley design that is long and sharp-edged, with a new optimised 6-litre W12 TSI engine, state-of-the-art onboard equipment, a refined and beautifully hand-crafted interior: with the third generation of the Continental GT, presented at the Frankfurt Motor Show 2017, Bentley is redefining the quintessence of Grand Touring by providing a blend of luxury and performance that is more potent than ever. Breitling for Bentley marks the occasion by launching a limited edition reflecting the entire spirit of this new roadgoing champion.

The ultra-light, ultra-sturdy case is made in Breitlight, a Breitling-exclusive high-tech material distinguished by its peerless qualities (resistance to scratching, traction and corrosion, along with non-magnetic, thermal stability and non-allergenic properties). Its subtly black streaked effect takes on a bluish shimmer echoing the colour of the Bentley "Dark Sapphire" livery. The dial features a diamond motif picking up the pattern appearing in several areas of the Continental GT interior and dashboard controls. The exceptional "motorisation" takes the form of a Manufacture Breitling B06 calibre officially chronometer-certified by the COSC.

This movement entirely developed and produced in the Breitling Chronometrie workshops is distinguished by its ingenious "30-second chronograph" system inspired by a 1926 Breitling patent, with a central hand completing a full sweep of the dial in half a minute - thus ensuring extremely accurate readings of times to the nearest eight of a second. This world-exclusive feature is highlighted on the black dial by the blue "30-second chronograph" inscription and measuring scale, picking up the subtle shades of the case.

To accompany driving accomplishments over long distances in both comfort and style, the Bentley GT "Dark Sapphire" Edition is fitted with a rubber strap - specially created for this model and bearing the same diamond motif as the dial - secured by a pushpiece-operated folding clasp. A Grand Tourer on the wrist, in a 500-piece limited edition.