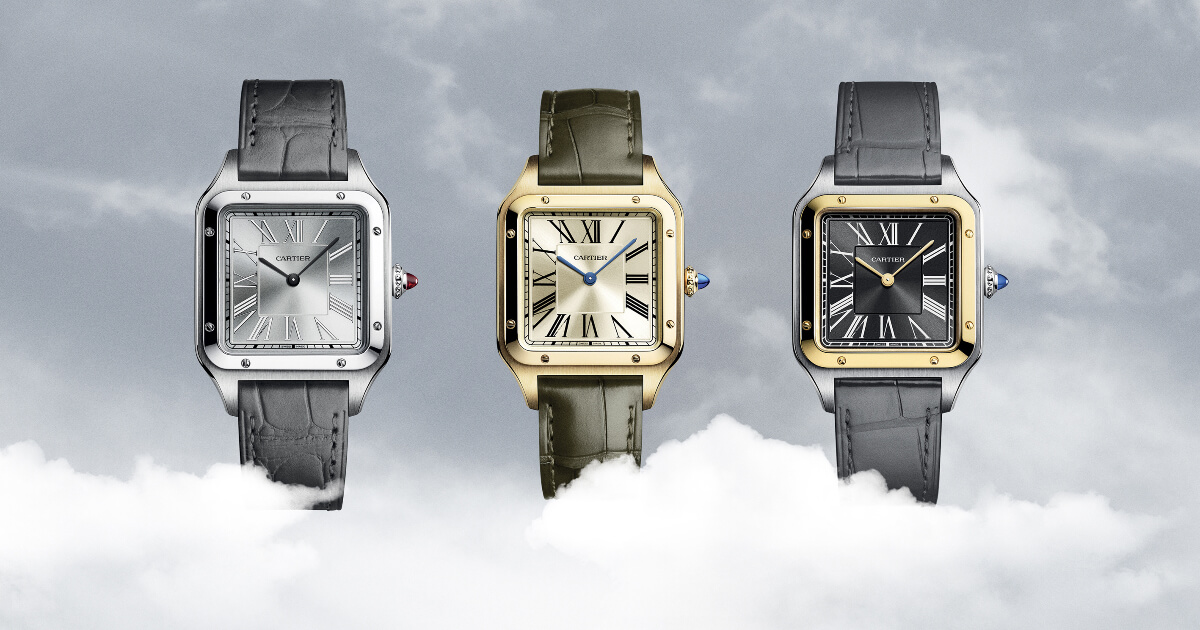 “Go further.” Such could have been Alberto Santos-Dumont’s motto, which pushed him to invent delicate, poetic flying machines for his pleasure and that of Parisian spectators – machines that connected dreams and technology, man and sky. This is the story told by the new Santos-Dumont watches.

Each of them now beats to the rhythm of the 430 MC mechanical movement with manual winding and is engraved with the original plans of Santos-Dumont himself.

An exclusive status that is confirmed by the combination of the rubied winding crown and platinum case. The sophistication of the polished or brushed finishes on the surfaces and bevel underlines its precious character.

On the reverse is engraved the design of Santos- Dumont’s very first machine, “Le Brésil”, created in 1898 – “the smallest” and “the most beautiful”, according to the aviator. Its unveiling took place on 4 July 1898, after which a series of airships numbered 1 to 22 would emerge between 1898 and 1909, representing his many attempts to defy the laws of weightlessness.

On the back is engraved the pro le of “La Baladeuse” or “n°9”, an experimental-looking motorized airship in which Santos-Dumont crossed the French capital’s sky in 1903. A small, bulging single-seater, “La Baladeuse” was intended for the personal use of its creator, who wished to demonstrate its usefulness in urban spaces. “The day will come when aerial omnibuses will transport tourists and business travelers,” insisted its creator.

On the back, an engraving of “n°14 bis”. In this flying machine, often described as a “kite of compartments”, the pilot, standing in the fuselage, was connected to the rudder and fins by cables. On 23 October 1906, after a day full of pitfalls, the “n°14 bis” won the Archdeacon Cup. Then, on 12 November, it took the Aéro-Club award. Alberto thus became the first aviator to complete a flight of 220 meters verified by an official organization.

with a lacquered wooden box and precious accessories

An extra-large-sized watch celebrating masculine elegance in 30 numbered pieces, engraved with the design of “La Demoiselle”, the most elegant of Santos’ flying machines.

This platinum watch with ruby cabochon was created in homage to Alberto Santos-Dumont, the pioneering dandy whose silhouette is inseparable from the panama hat he was never seen without. Cartier pays tribute to this stylish accessory by using a made-to-measure Panama-weave strap. On the dial, the central square also evokes the woven design. As a detail for connoisseurs, the “Cartier” signature traditionally slipped into one of the branches of the VII is replaced by a “Santos”.

Created in 1908, “La Demoiselle” is Alberto Santos-Dumont’s most accomplished flying machine, and one of the first aircraft to be mass produced. With it began a new era: “And we will sail through the air seeing Europe unfold at our feet like a geographical map. There we will remain, suspended between the stars and the earth.”

The price for the Cartier Santos-Dumont “La Demoiselle” watch is CHF 41,600.

All the watches will be available from May 2020.