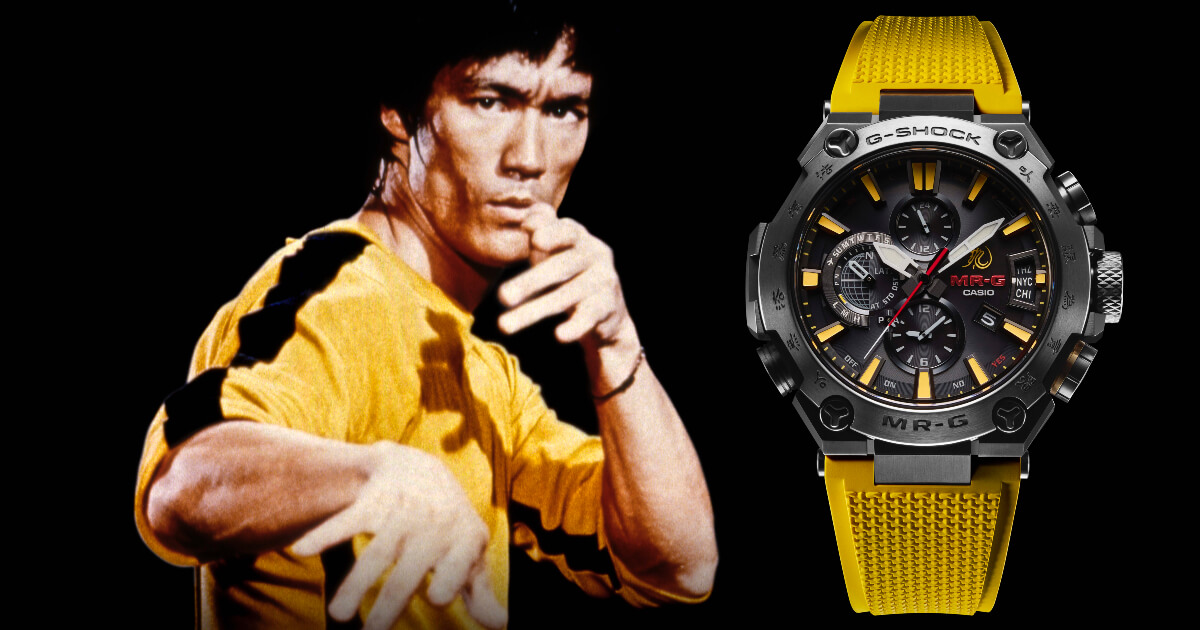 Casio G-Shock adds a new addition to its luxury MR-G line. A total of only 300 pieces of the limited-edition watch, which is a collaboration model featuring legendary action film star and martial artist, Bruce Lee, who would have turned 80 years old this year, will go on sale worldwide.

The G-Shock MRG-G2000BL-9A was envisioned as a collaboration between Bruce Lee, whose combination of world-class physical and mental toughness continues to captivate people today, and the ever-evolving MR-G series, the pinnacle of the G-Shock line, which likewise continues to deliver an uncompromising commitment to structured materials, processing, and finishing.

The updated MRG model arrives with a yellow, Dura Soft Fluoro-Rubber Band, which brings both high durability and a soft feel on the wrist, as well as sapphire glass crystal that provides outstanding scratch resistance.

In addition to a strong yet comfortable band, the Casio G-Shock MRG-G2000BL-9A also boasts a sleek bezel that is coated with diamond-like carbon (DLC) to increase abrasion resistance. The model’s titanium case and bezel are also subjected to a deep-layer hardening process, which makes their surfaces four to five times harder than plain titanium, for a double hardening treatment, ensuring strength throughout the entire model.

The colors black and yellow are used for the case and the band respectively, recalling the tracksuit worn by Bruce Lee in the posthumously released film, Game of Death. In addition, the colors yellow and red, which appear in the emblem of Jeet Kune Do, the martial arts philosophy founded by Lee, are used for the indices and the MR-G logo and second hand, respectively.

The 3 o’clock position on the dial is also decorated with Bruce Lee’s signature, using the Chinese character "龍," or dragon, Bruce’s nickname. These and other features make the MRG-G2000BL-9A a special model very much alive with the energy of Bruce Lee, whose legendary spirit transcends the generations.

The MRG-G2000BL-9A also comes equipped with G-Shock technology including:

The price for the Casio G-Shock MR-G X Bruce Lee Model Ref. MRGG2000BL-9A is US $4,000 and will be available for purchase beginning in April at select Jewelers and the G-Shock Soho Store.