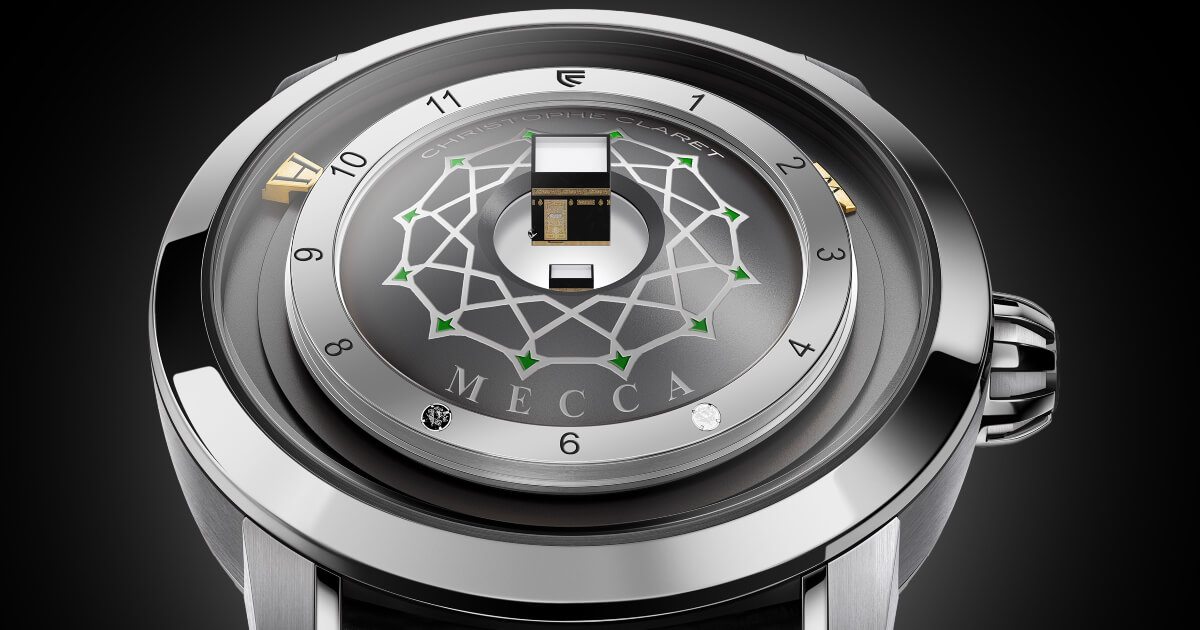 A keen connoisseur of history and culture, Christophe Claret unveils a timepiece whose symbolic power is highlighted by the ingenious optical phenomenon of the mirascope. At the center of this limited edition conveying a message of peace, the iconic Kaaba monument symbolizing the Muslim faith appears to literally burst out of the dial.

This true virtuoso of the watchmaking art plays with mechanics, reinvents style codes and creates a fresh and very personal vision of the passing of time. This approach has driven the creation of the Mecca timepiece that uses the optical phenomenon of the mirascope in paying tribute to a moderate expression of the Muslim faith through a message of peace and tolerance.

Exactly like the effigy of Emperor Marcus Aurelius enthroned at the heart of the Aventicum model unveiled in 2015, the micro-engraving of the Kaaba is highlighted by the mirascope, a process invented about thirty years ago at the University of California. The mirascope is composed of two identical parabolic mirrors arranged one on top of the other, creating an elliptical shape. The convex mirror on top has a hole in the middle. When an object is placed in the center of the concave bottom mirror, the reflection from the top mirror creates a hologram of the object, which appears nearly two times larger than it actually is. In implementing this optical effect in the Mecca model, the Kaaba looks as if it is thrusting out of the middle of the watch and offers a 360-degree view of the famous cube-shaped building erected at the center of the sacred mosque in the Holy City of Mecca.

Mecca, like all Christophe Claret signature timepieces, epitomizes the highest standards of fine watchmaking embodied by the brand. Developing the technically demanding mirascope to function perfectly took extreme dedication and focus. Two months of research and several prototypes were integral to obtaining the desired optical effect. The next critical step was designing and crafting the hour and minute hands, which had to be reconfigured, as the mirascope was now the centerpiece of the watch. The hands became pointers revolving on an invisible ring around the perimeter of the dial, each equipped with a counterweight to optimize stability. The challenge of creating the hands was to find a material light enough to compensate for the relatively larger – though mainly concealed – size of the display mechanism. The solution was to use anticorodal (aluminum), which has an excellent rigidity/weight coefficient.

The power of symbols

Esthetically speaking, no detail was left to chance. The Mecca timepiece features a wealth of emblematic elements and references to the Muslim faith. First, the dial which opens on to the micro-engraving of the Kaaba is decorated with an oriental-inspired engraved motif lacquered in gray and green, the color of the Muslim faith. To accentuate the symbolism of the piece, the Arabic hour numerals were then replaced at 5 o’clock by a natural diamond and at 7 o’clock by a black spinel. The latter symbolizes the black stone located at the South-East angle of the Kaaba through which Muslims start the seven rounds of the Tawaf in a counterclockwise direction. The diamond represents this same stone, as described in the Koran before it became black due to repeated touching by pilgrims.

The aesthetic and symbolic spectacle is continued on to the back of the Mecca timepiece. The ball-bearing cover is adorned with a transfer depicting the Kaaba, with the movement’s self-winding oscillating weight rotating around it. It should be noted that Christophe Claret has obtained a patent for the sapphire element connecting the ball bearings to the oscillating weight concealed behind a circle Crafted in sapphire so as to reveal the meticulous movement finishing, the oscillating weight bears a transferred world map featuring white dots symbolizing Muslims turning around the Kaaba. Three Arabic expressions set the final touch to this new invitation to experience spirtuality. At 12 o’clock, Masjid al-Haram means “The sacred mosque”. At 4 o’clock, the word “Tawaf” evokes the seven turns that the pilgrims must perform around the Kaaba. Finally, at 8 o’clock, Makkah al-Mukarramah means “The Holy City of Mecca”. That says it all, or almost… The circumference of the titanium case also reveals the fact that only sixty-three passionate enthusiasts will have the chance to wear each version of the Mecca timepiece on their wrist. Sixty-three, corresponding to the age of the prophet Mohammed when he died...