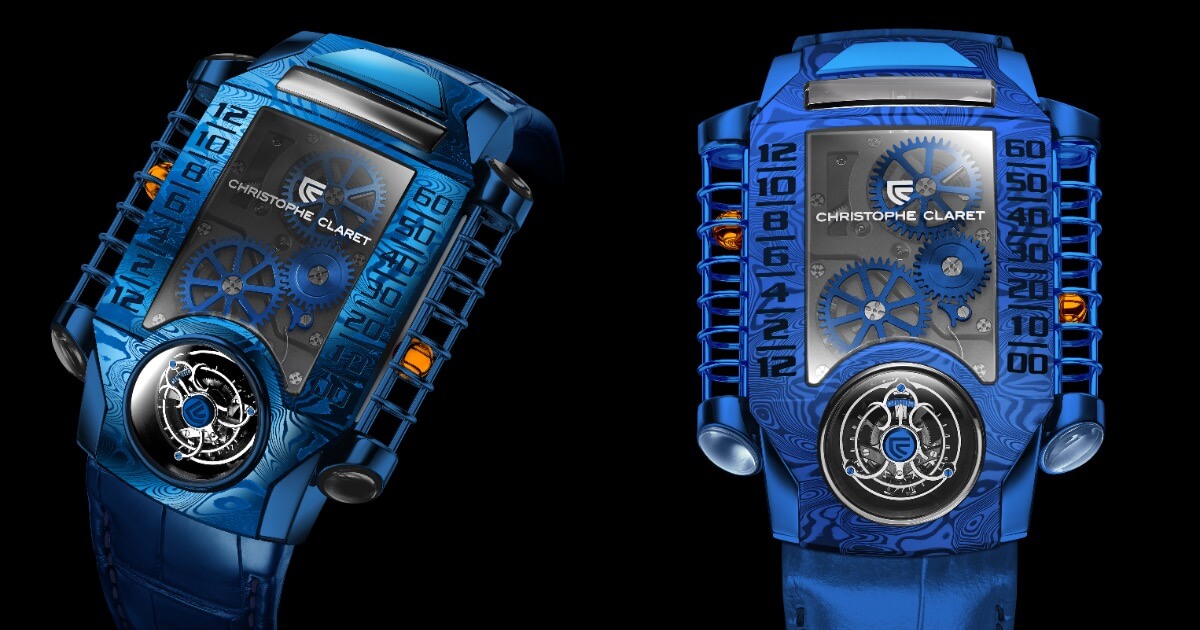 Four years after unveiling the X-TREM-1 timepiece, the watchmaker from Le Locle reveals two new versions in blue damascened steel, issued in 8-piece limited edition. X-TREM-1, the first of a generation of exceptional timepieces, represents a major technical and aesthetic accomplishment: a flying tourbillon inclined at a 30° angle, mounted on a three-dimensional curvex titanium mainplate, equipped with a retrograde hours and minutes display system that is radically different from existing watchmaking conventions. Two tiny hollowed steel spheres, isolated within sapphire tubes on the left and right sides of the caseband, magically move with no mechanical connection thanks to magnetic fields.

The Extreme Complications Watches line certainly deserves its name. It expresses Christophe Claret’s determination to continue pushing the boundaries of mechanical watchmaking, integrating certain fields of research never previously applied in this domain. X-TREM-1 is a fine example of this approach that involves using a system driven by magnetic fields display the hours and minutes.

The challenge was bold, and some might say a little crazy: How could someone possibly think about introducing a magnetic field – the arch enemy of horological mechanisms – into the heart of a watch? The Christophe Claret team has done just that by creating a system where two small steel spheres – hollowed to make them lighter and encased within two sapphire tubes placed to the right and left of the caseband – are controlled by precision magnetic fields generated by two miniature magnets moved by cables. The cables are incredibly flexible, made from hundreds of Dyneema nanofibers all contained within an ultra-high-strength polyethylene gel, capable of withstanding tensile forces of up to a kilo. The entire thread is thinner than a human hair (4 hundredths of a mm in diameter). The resistance of the thread has been tested in the Manufacture Claret on an accelerated- wear simulator corresponding to 60 years of operation.

The spheres have no mechanical connection with the movement, with each one floating inside the two tubes and creating outstanding horological magic. The mastery of magnetism, which allowed this feat was developed in partnership with the School of Business and Engineering Vaud (HEIG-VD) in Yverdon-les-Bains, and a team headed by Professor Besson.

The entire construction and finishing of this timepiece meet the extreme demands systematically imposed by Christophe Claret. Ultra-light titanium was used for the three-dimensional curvex mainplate and the bridges. The flying tourbillon is fitted with double ceramic bearings to enhance its shock-resistance. It is inclined at a 30-degree angle in order to make it even more clearly visible to the wearer. The hand-wound watch draws its energy from two barrels enabling the use of a sophisticated display without disturbing the rate of the tourbillon, and thus the accuracy of the watch. The first barrel is reserved for the tourbillon, the second for the hours and minutes.

Driven as ever by a determination to present avant-garde timepieces, PVD-treated grade 5 titanium and damascened steel were the metals chosen to make the case of this new version of the Christophe Claret X-TREM- 1.

A keen student of history, Christophe Claret felt it would be an interesting exercise to craft the case of the X-TREM-1 – the most innovative and contemporary model in his collection – from damascened steel produced using ancestral methods. This material was first made in the Caucasus around 2500 BC, soon after the discovery of iron, and subsequently spread throughout Europe as well as to Asia. Entirely forgotten during the Middle Ages, it was rediscovered by the Crusaders. Weapons equipped with extremely sharp damascened blades were long considered the finest in the world.

After a further period of neglect, this type of steel reappeared under Napoleon and was used to make gun barrels around the mid-19th century. It has been consistently used in Asia, and Japanese samurai warriors made their katana swords from this material combining the suppleness of the blade with an extremely hard cutting edge. Its resistance in combat gave them a significant tactical advantage over their enemies.

Damascened steel is traditionally produced by layer-assembling two types of steel. Several successive forging and folding steps result in a piece of metal that may comprise several hundreds of layers. This extremely technical high-end alloy boasts excellent properties: a homogenous structure, pure material, as well as extreme resistance to corrosion and shocks. For this new X-TREM-1 model, the grades of steel used are 316L and 304L. The difficulty lay in introducing gold or lacquer into damascened steel for the time indication, and the second challenge involved actually machining the case from the extremely resistant damascened steel, and especially to develop specific tools, capable of machining the damask composed of two different stainless steels.

The many details that make a difference and contribute to giving this model its strength, the stainless-steel sphere that have an ultra-hard orange treatment, contrasting the display of time by its bright colour. This Christophe Claret X-Trem-1 edition is produced in an 8-piece limited edition.

·       Barrels: Dual barrels: one for the movement gear train, one for the time indications

-       Seconds displayed on the tourbillon cage

-       Use of precisely-shaped magnetic fields in a mechanical movement

-       No mechanical connection between time indications and the movement

-       Winding and time-setting via lift-out rotating “bows” on caseback