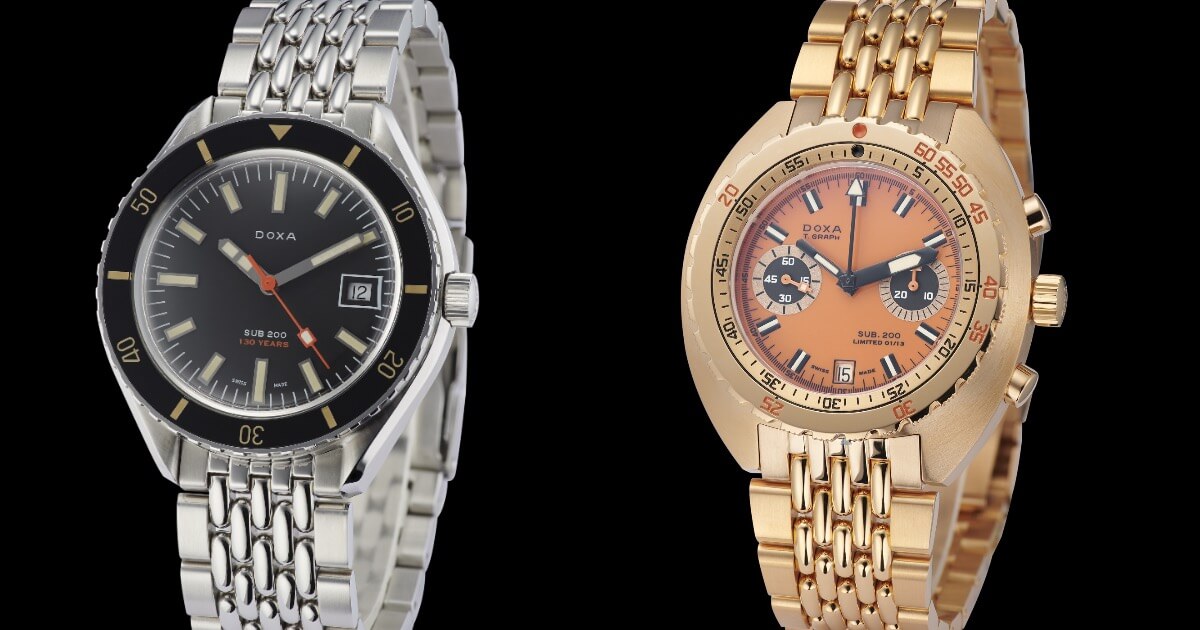 On the occasion of Baselworld 2019, Doxa celebrates a magnificent double anniversary:

·       The 130th Anniversary of its founding as a Swiss watchmaking brand

“Doxa Sub” remains synonymous with some of the most emblematic diver’s watches in watchmaking history. And the legend lives on.

The legendary diver’s chronograph, presented for the first time in a limited 18K gold edition, with a numbered dial and engraved caseback in a series of only 13 timepieces.

This “Anniversary” series is all the more exceptional as it comes equipped with original Valjoux 7734 movements carefully preserved by Doxa for 30 years. Collectors be advised!

In 316L steel, 3 hands, an engraved caseback, and only be 130 numbered copies to celebrate the 130th anniversary of the Doxa brand. This is a special series produced and offered as a first, to announce the arrival of a new line that will be marketed at the end of 2019.

The reinterpretation of an iconic model:

For the first time Doxa will present a limited series of a diver’s watch in 18K gold.

Each face is unique and numbered. An edition of only 13 timepieces.

An exceptional edition that comes equipped with original Valjoux 7734 movements which had been carefully preserved by Doxa for 30 years.

In 1967 at Baselworld, Doxa launched the revolutionary SUB concept, considered to be the first truly mainstream professional diver's watch.

The radical innovations it presents quickly made it a reference for professionals as well. Water-resistant until a depth of 300 meters, it is the first professional diving watch to feature a patented rotating bezel that incorporates the US Navy’s no-decompression table. This watch quickly becomes an easily recognizable legend for another key reason, too: it is the first and only diver’s watch to have an orange dial, contrasting with the conventional black or white backgrounds.

In 1969, the Doxa SUB concept was further refined with the launch of the 200 T.Graph. It remains today one of the most emblematic diving watches in watchmaking history. And the legend continues.

50 years later, for the first time Doxa unveils a reinterpretation of an iconic model as a limited 18K gold edition

The Doxa SUB 200 T.Graph will be presented for the first time in a very limited edition of only 13 units to celebrate the brand’s 130th Anniversary in 2019.

Notice to collectors: This "Anniversary" series is all the more exceptional as it comes equipped with original Valjoux 7734 movements, a historical treasure carefully preserved by Doxa for over 30 years.

Timeless gold, noble metal par excellence, is a natural choice for such an exclusive limited edition, the reincarnation of one of the most famous Swiss diver's watches, in honor of its 50th Anniversary.

With a diameter of 43mm, the case is crafted from a single block of 4N gold and topped by a scratch-resistant sapphire crystal.

Watertight till 20 ATM, equivalent to a depth of about 200 meters, the Doxa SUB 200 T.Graph also features the famous patented unidirectional rotating bezel with dual indication of the dive time in minutes and the depth in feet for a no-decompression ascent. At 12 o’clock on the minute ring, a bright spot of SuperLuminova.

This Anniversary Series is equipped with the original 7734 Valjoux movements, which have been carefully preserved as a historical treasure for nearly 30 years under the guardianship of the Swiss family Jenny, owner of the Doxa brand for over twenty years.

Each caliber has been thoroughly examined, overhauled and reconditioned before being fitted into the case. Only 13 numbered copies of this special "Anniversary" model will be available for sale, each sporting an orange rubber strap. The iconic rice grain mesh bracelet will also be available in 4N gold.

On the occasion of Baselworld 2019, Doxa presents a new edition of the Doxa SUB 200 in steel to celebrate the brand's 130th anniversary.

Only 130 numbered timepieces to celebrate the 130th Anniversary of the Doxa brand:

A special series produced and offered as a premiere, heralding a new line to be introduced in late 2019.

Just like the original model, this Doxa 3-handed diver's watch has a case made of a single block of 316L stainless steel of the highest quality.

At a diameter of 42 mm, the Doxa SUB 200 features a sapphire glass which takes on the distinctive shape of the curved plexiglass from back in the day. Water resistant to 20 ATM, equivalent to a depth of approximately 200 meters, the model features a unidirectional rotating bezel. The vintage character of this special series is further accentuated by the beige-colored SuperLuminova gradations and the light dot in "Light Old Radium" at zero minutes on the diver's bezel.

The watch is powered by a Swiss automatic ETA 2824-2 mechanical caliber and rounded off with the emblematic Doxa "rice grain" mesh bracelet, which is also made of 316L steel and features a diving extension folding clasp.

Other distinctive features of this edition: the watch’s screw-down caseback engraved with "130 Years", the famous Black Velvet dial and its baton-styled hands and hour indices with SuperLuminova beige “Light Old Radium" inserts.