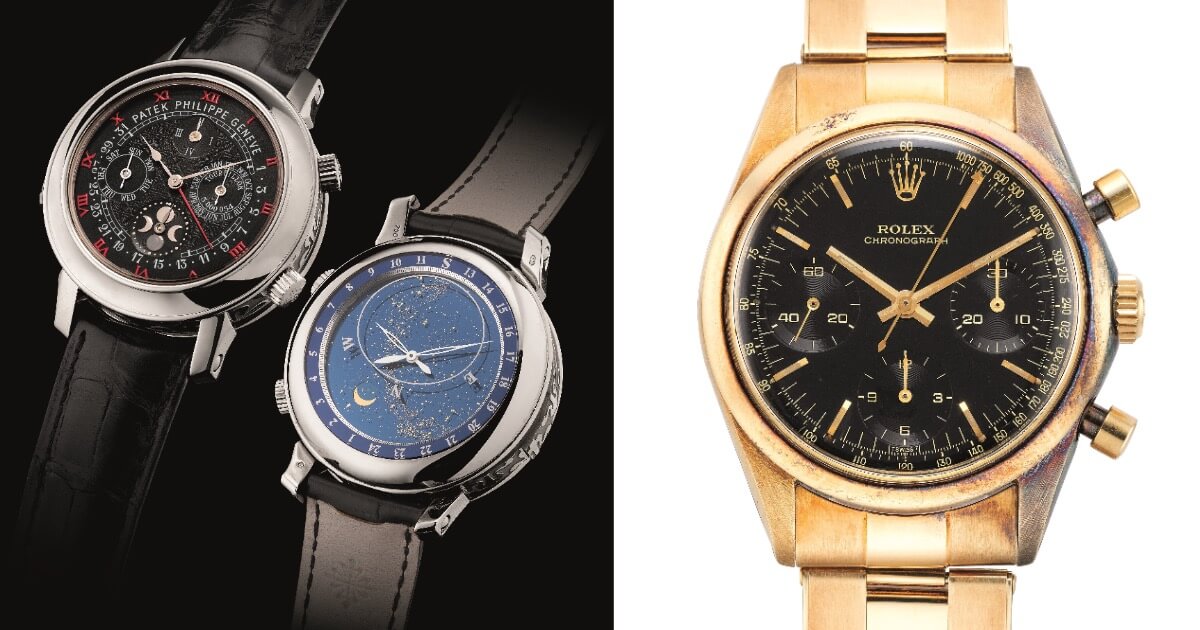 Taking place from 25-26 November, the auction will be divided into two sessions. The evening session on 25 November, titled FIRST, will feature over 50 fresh-to-market watches from original owners of exceptional quality, led by the extremely complicated, important and most probably unique white gold Patek Philippe Reference 5002G with certificate of origin and presentation box. FIRST will be followed by a Day Session on 26 November, featuring over 260 timepieces encompassing vintage and modern collectors' watches from leading brands such as Patek Philippe, Rolex, Omega, A. Lange & Sonne, Vacheron Constantin, Audemars Piguest, IWC and Jaeger-LeCoultre.

Thomas Perazzi, Head of Watches, Asia, said: "FIRST offers a wide range of watches that are appearing for the first time in auction. It is a unique sale that our team in Asia is very honored to have assembled. From the incredibly rare and most probably unique white gold Patek Philippe Reference 5002G, to the extremely attractive Rolex Cosmograph Daytona Reference 6265 with "tropical" Panda dial, the sale offers collectors an opportunity to acquire remarkable timepieces that have never before been seen on the market. In addition, we are also proud to offer vintage and modern masterpieces by the world's foremost watchmakers in the day sale. These include an exceedingly rare example of a Rolex reference 6238, exceptional and unique pocket watches by Patek Philippe, a splendid collection of Patek Philippe Nautilus, as well as an impressive selection of Omega Speedmaster. We also look forward to kicking off our tour to 8 major cities this month and introducing these outstanding timepieces to watch enthusiasts across the globe."

In 2001, Patek Philippe released reference 5002 "Sky Moon". Inspired by the pocket timepiece Star Caliber 2000, Patek Philippe miniaturised the model into a wristwatch that features a double dial with cathedral gong minute repeating mechanism and tourbillon. While any Sky Moon Tourbillon, disregarding case material or dial layout, is an absolute masterpiece and something that horological dreams are made of, the present example unarguably surpasses its peers in looks and collectability, as it features a special request, never-before-seen dial. While what is normally found on platinum 5002 is a white dial with applied Roman numerals, the present piece features a so-far unique configuration with black dial and red painted Roman numerals.

Launched as a commemorative piece for the firm's 175th anniversary, the Patek Philippe reference 5275 is part of a limited edition of 175 pieces. Featuring a hand engraved tonneau-shaped platinum case, the dial also features a wonderful piece of artistry reflecting the skilled craftsmanship of Patek Philippe. The reference 5275 features a number of complications: all the time indications - the seconds, the minutes and the digital hour - proceed by jump intervals, rather than a constant movement. Furthermore, the jumping of the three time indications - at the striking of the minute or of the hour - is perfectly synchronized. Exceedingly, the chiming wristwatch, indicating the passage of the hour with a crystal clear chime can be disabled via the slider at 10 o'clock; the complexity of the mechanism powering this masterpiece is simply awe-inspiring. Offered in single sealed condition and fresh to the market, the present Patek Philippe reference 5275 is preserved in unworn status and complete with the original Patek Philippe Certificate of Origin and its accompanying set of accessories.

Coming across a Panda dial is already a momentous occasion for a collector, but coming across a Panda dial which, not only is as well preserved as the present one, but even features a tropical outer track, is beyond outstanding. To give an idea of the rarity of this dial configuration, one has to think that over the entire lifespan of the Phillips Watch department, only three tropical Panda dials have been sold, and all of them were fitted onto references 6263. This is the first instance that Phillips is entrusted with a 6265 tropical Panda.

With direct reference from the original owner, the present reference 6239 Paul Newman was a lucky survivor of a fire. It was one of the only items that the owner decided to take with him when his house was minutes away from burning into ashes. The present example is an excellent example of an ultimately rare Paul Newman Daytona, which could have been ashes instead.

To commemorate what is considered to be one of the most iconic luxury sports wristwatches in modern times, Patek Philippe launched limited edition wristwatches featuring a unique dial embossed with 1976-40-2016 to celebrate the 40th anniversary of the much admired Nautilus. Included in the limited edition launch was the Nautilus reference 5976G chronograph wristwatch with date and further features a larger 44mm diameter case. The present example is further enhanced by the presence of the original accessories that came with the watch when it was purchased by the watch's first owner, including the iconic Nautilus cork presentation box. A wonderful opportunity to acquire an important example from the lineage of the world's most iconic luxury sports watch manufactured by Patek Philippe.

Regarded as one of the modern masterpieces manufactured by Patek Philippe, belonging to the family of Grand Complications, the reference 5208P features a minute repeating perpetual calendar single-button chronograph movement. The present example encased in platinum is presented in excellent overall condition and further accompanied by the full set of accessories. Offered to the most distinguished and loyal collectors of Patek Philippe, the reference is definitely a highly prized wristwatch, part of the family of Grand Complication wristwatches, which no doubt will one day be revered as a legendary piece of respected mechanical artistry.

Between 1967 and the mid-2000s, Patek Philippe produced a small number of unique pocket watches decorated with superbly rendered scenes in miniature enamel in collaboration with great miniaturists such as Suzanne Rohr, Marthe Bischoff, Helene-May Mercier, and Pellarin-Leroy. Each of these pocket watches took an average of six months -sometimes much longer - to complete.

Marthe Bischoff, one of the best miniature enamelers of the past century, completed an exceedingly small number of pocket watches for Patek Philippe during her career, no more than half dozen of which are known today. The present yellow gold Patek Philippe pocket watch bearing reference 866/2 is adorned with a scene in miniature enamel after a Dutch landscape painting by 17th Century Dutch Golden Age master Salomon van Ruysdael. Completed in 1975 at the height of Bischoff's prowess as an artist, it is without doubt one of her best works. In perfectly preserved, "safe queen" condition and accompanied by its original box and every conceivable document including the Certificate of Origin and original commission papers, this trophy of enameling art represents a once in a lifetime opportunity for the most serious collectors.

Patek Philippe, reference 866/2: An exceptional and unique gold openface watch with enamel miniature painted by M. Bischoff after a painting by Salomon van Ruysdael, with original certificate of origin, hang-tag and presentation box. 1975.

Hailing from the beginning of the 1960s, the reference 6238 would be the last chronograph produced by Rolex that would not be a Daytona. Nicknamed the "Pre-Daytona", the reference housed a manual winding caliber 72B with a Valjoux ébauche. The 14K yellow gold case alone captivates the mind of the most discerned collector, as most examples were produced in stainless steel or in 18K gold.

Furthermore, most examples are produced in silvered or matte black dials, whereas this example features a "glossy" black dial. Very few examples like it have surfaced on the market. With an intrinsically appealing configuration sporting an attractive and unique 14K yellow gold case with heavy presence of oxidation developed on the right side.

The second batch of 6538 productions, which is most likely to have been manufactured in the third quarter of 1956, appears in an extremely concentrated case number range from around 158'100 through to approximately 158'400. The present reference 6538, case number 158'102 is the earliest case number to have surfaced from this batch, still retaining its extremely well preserved dial and original "no hash", silver triangle insert carried over from the reference 6200 earliest 6538 batch, as well as nicely patinated nickelplated brass bezel ring. While a large portion of earlier examples only featured two lines, "200m = 660ft" and "SUBMARINER". The present watch further displays two additional lines "OFFICIALLY CERTIFIED, CHRONOMETER". The absolute rarity of this particular configuration of this already scarce reference, is confirmed by the fact that only five examples have appeared in the market with their original dials in recent years, and even then some were in rather poor condition. Remarkably only two were in the "four liner" configuration.

First introduced in December 2018, the Datograph "Lumen" was launched as a limited edition series of 200 pieces. With a complex construction of the main dial in tinted sapphire, the translucency allows the main plate below to be exhibited, proudly displaying its precise perlage finish on the surface. The tinted sapphire dial allows the luminous material to absorb UV rays from daylight to be luminous at night. This feature applies to all luminous components on the dial. The present example Datograph "Lumen," numbered 91 of a limited edition of 200 pieces, is presented in "like new" condition and with all accessories that came with the watch when it was purchased by the original owner.

Fifty years ago on July 20th, 1969 one of man's greatest feats was achieved with the landing of the Apollo 11 lunar module on the surface of the moon. Neil Armstrong and Buzz Aldrin became the first men on the moon, and with them the Omega Speedmaster Professional became "the first watch worn on the moon". The reference BA145.022-69 in yellow gold chronograph was released following this historic event as a commemoration of this accomplishment. Omega produced 1014 examples.

The present example number 626, featured an engraved back reading "Omega Speedmaster-Apollo XI 1969-The First Watch Worn on the Moon". The BA145.022-69 has a strong appeal with gold dial, onyx numerals and burgundy bezel. The present lot is offered in excellent over all condition and is enhanced by the addition not only of the international guarantee and original invoice but the very rare lunar scape Crater presentation box.