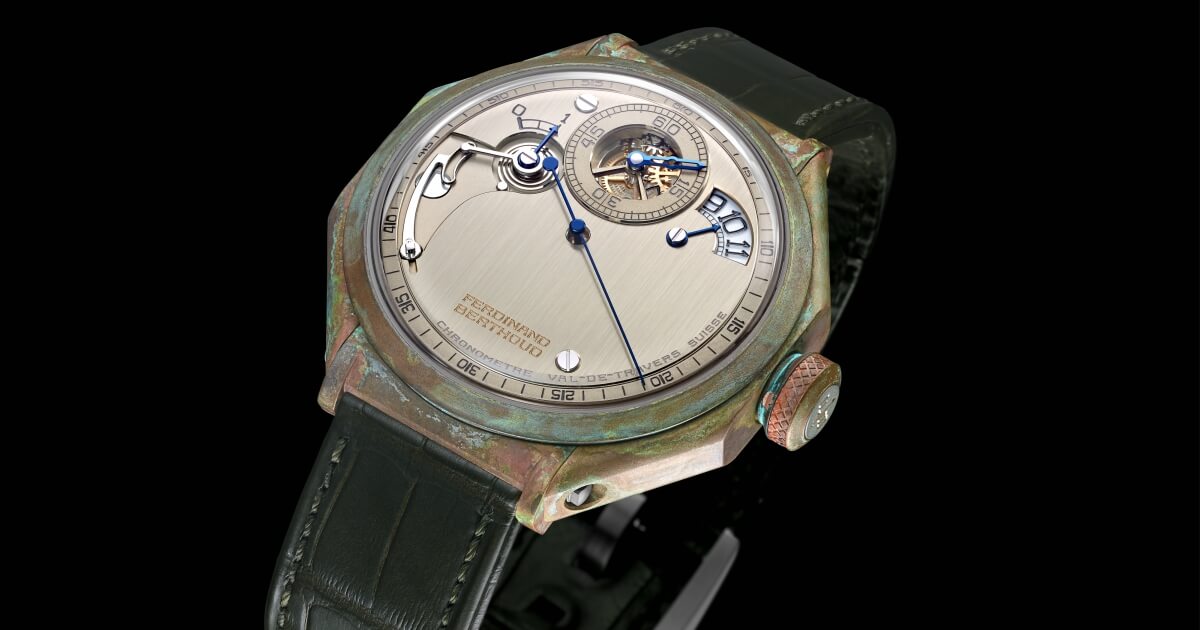 A new interpretation of the Chronomètre FB 1R presented at the SIHH 2018, the 1785 edition is a series of five bronze watches – each of which is truly unique due to the use of various artistic patinas – embodying a double homage. The first tribute is paid to Ferdinand Berthoud’s Marine Clock no 7, a major source of technical and aesthetic inspiration for this regulator-type model.

The second is embedded in the name of the 1785 edition. It harks back to the famous exploratory round-the-world voyage undertaken by Lapérouse between 1785 and 1788. The presence of bronze, its unique patina, as well as calibre FB-T.FC.R-2, are all reminders of the instruments used for measuring time at sea. Marine chronometers and sextants were the only means of calculating longitude and thereby represented decisive factors in the success of their respective expeditions.

By transposing the quest for excellence pursued by the master Clockmaker and Mechanic by appoint to the French King and Navy into contemporary language, Chronométrie Ferdinand Berthoud is highlighting the progress of science, of time measurement and of world knowledge.

The FB 1R chronometers in the 1785 edition measure 44 mm in diameter and less than 14 mm thick. The beadblasted case is entirely made of bronze, an alloy chosen for its capacity to acquire a distinctive patina. The five regulator models, numbered Fb 1R.5-1 and FB 1R.5-5, all feature a different colour. This is because each of the de facto unique patinas of these models has been made using a distinct formula, chosen after dozens of trials and tests. The aim was to achieve the desired shades while ensuring their dermo-compatibility in compliance with the REACH regulations of the European Union.

The case features two bronze side shafts in bronze that endow it with a characteristic octagonal shape. The sides bear two portholes at 2 and 11 o’clock, providing a chance to admire the fusee and chain mechanism in action. These two openings are complemented by the glareproofed sapphire crystal case-back affording a pleasing glimpse of the movement finishing. The knurled bronze crown featuring a titanium medallion ensures smooth and easy winding of the movement. The latter is endowed with a 53-hour power reserve.

The chronometers of the 1785 edition are resolutely different to existing regulator-type displays. They feature a mostly solid dial, which is in fact the reverse side of the regulator-display complication plate. The latter is made of nickel silver, vertically satin-brushed by hand, and feature three small openings. The first provides a reading of the dragging seconds, offset at 2 o’clock. They are displayed on a glareproofed sapphire disc with transfer-printed Arabic numerals, which stand out clearly against the white background. The second reveals an unusual power-reserve display mechanism, highlighted by a wide dial cut-out showing part of the finely sandblasted baseplate.

The third opening is located in the centre of the 12 o’clock minutes counter. Finely chamfered, beadblasted and adorned with gilded chamfers, the central opening provides a fascinating view of the gear train with its hand-engraved pyramid-motif decoration. The latter is inspired by that of a skeletonised astronomical clock by Ferdinand Berthoud that belongs to the L.U.CEUM collection. The seconds appear around the rim of the dial, on a beadblasted and chamfered nickel silver inner bezel ring.

Finally, the nature and origin of the chronometers composing the 1785 edition are flaunted on the large dial, engraved with the inscription “Chronomètre Val-de-Travers Suisses”. More than a mere signature or an appellation of origin, this is a proudly proclaimed affirmation of identity.

A patent has been filed for the highly sophisticated device serving to indicate the power reserve. Visible through an openworked half-bridge on the case-back side, a truncated cone moves up and down along a worm screw-type arbor attached to the barrel. A mobile arm topped by a roller acts as a feeler spindle and its position on the cone reflects the barrel’s state-of-wind.

The feeler-spindle transmits the information regarding the quantity of energy stored in the barrel to a set of finely chamfered and rhodium-plated levers visible through a cut-out in the regulator-display plate. A spiral-shaped spring at the end of its travel exerts pressure on the base of the power-reserve hand. This spring serves to reduce the play between the various components of this mechanism and to display power reserve with peerless precision. This ingenious mechanism reflects the experimental mindset of Ferdinand Berthoud himself, who revelled in exploring solutions well off the beaten track.

Calibre FB-T.FC.R-2 is one of the rare movements to feature a fusee and chain transmission system, the oldest solution for ensuring a constant-force supply of energy to the escapement. It acts like an automatic reduction gear box, since the torque delivered by the barrel varies according to the state-of-wind.

When the movement is fully wound, the chain is entirely wrapped around the small end of the spindle-shaped fusee and the mainspring is at maximum power. This force dwindles over time and the chain coils around the drum, transitioning from the narrow to the broad end of the fusee. The varying diameter of the fusee compensates for the reduction in mainspring torque. The escapement thus receives a constant supply of energy, thereby equalling out the amplitude of the balance wheel and improving the movement’s precision.

The latter also stems from the tourbillon. Visible on the case-back side only, it comprises 67 parts housed in a 16.5 mm-diameter titanium carriage – itself fixed to a perfectly polished and hand-chamfered arrow-shaped steel arch. To counteract the unbalance of the escapement, two gilded nickel silver poising weights equal out the masses of this large carriage. The tourbillon itself does not indicate the seconds, since the chronometers of the 1785 edition feature a tourbillon with an extremely long and slender gilded bronze seconds hand which glides with remarkable precision and stability.

Together, these two outstanding horological systems, interpreted in accordance with the best practices, endow calibre FB-T.FC.R-2 with chronometer status, a title awarded by the Swiss Official Chronometer Testing Institute (COSC).

The bridges of calibre FB-T.FC.R-2 are made from non-treated nickel silver. This copper, zinc and nickel alloy can be polished to an exceptional sheen, yet remains extremely fragile and any imperfection is irreparable. Nickel silver is also distinguished by its warm grey colour greatly appreciated by connoisseurs. It sits particularly well with bronze, a material used for the first time by Chronométrie Ferdinand Berthoud, yet firmly anchored in the history of both watchmaking and navigation. Despite its tendency to become oxidised, it has a firmly established place among the materials suitable to horology. Its inherent nobility stems from usage that dates back to prehistorical times.

The arrow-shaped steel tourbillon bridge is decorated with meticulous care. The upper surface is mirror-polished, the sides are straight-grained and the angles are polished. All components of the titanium tourbillon carriage are entirely chamfered. The power-reserve cone is mirror-polished. The two bridges framing the tourbillon are openworked. The chain, composed of 790 steel parts and measuring 285 cm long, is entirely hand-finished. The sides and stud-pins are satin-brushed, while the flat surfaces are polished.

The finishing operations on the components, whatever their place or function, are done manually by Chronométrie Ferdinand Berthoud using traditional tools. The quality control of this finishing is conducted under a degree of magnification far higher than usual in the watch industry: a 6x loupe. At this level, not even the slightest detail could go unnoticed. No flaw, imperfection or inadequacy is tolerated. Such is the reality of the horological excellence cherished by Ferdinand Berthoud, chronometer-maker for the explorers. This respect for watchmaking tradition as expressed in a modern manner through Ferdinand Berthoud chronometers will remain at the core of future developments from the Maison.

• Hours indication on a sapphire disc at 2 o’clock

• Hand finishing in accordance with the highest watch industry standards

Officially chronometer-certified by the COSC

The price for the Ferdinand Berthoud Chronometre FB 1R5 Edition 1785 is CHF 241, 500 limited to 5 unique pieces with different patinas.