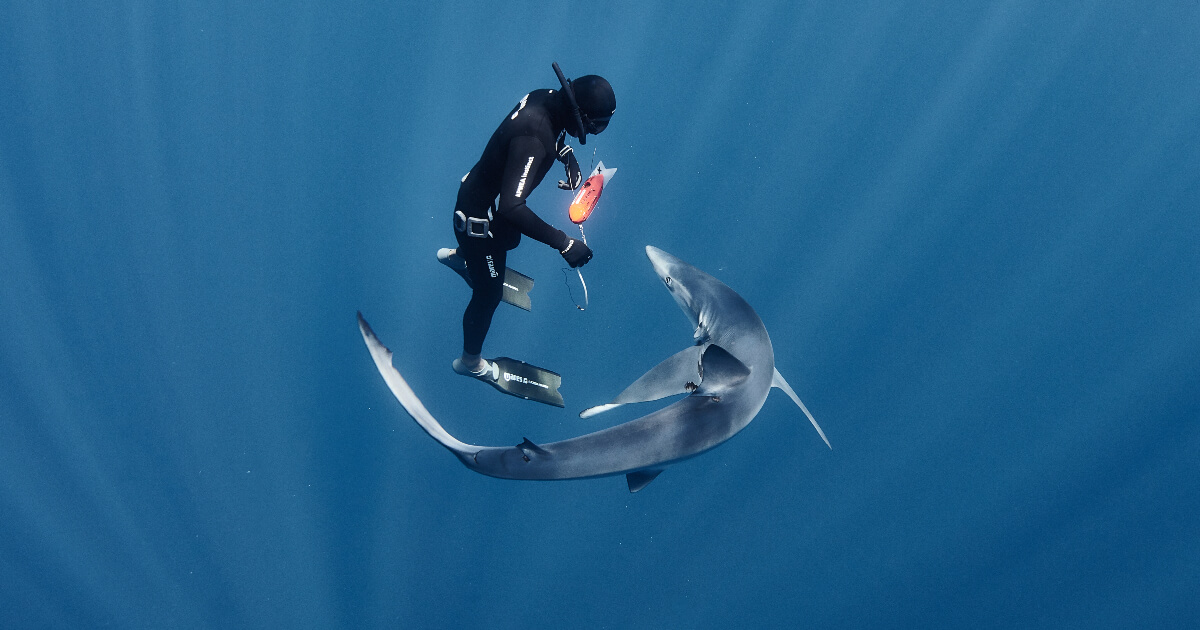 Ulysse Nardin has just offered a grant to the Azores University’s marine research centre to acquire ten pop-up biologging sensors to tag blue sharks in the Atlantic and document our knowledge of this endangered species. Swimming with blue sharks, his Diver 44mm on the wrist, Buyle tags marine animals in their natural environment using non-invasive techniques. Buyle is using his underwater photography and free diving skills to change the way we see the seas.

Many marine species are difficult to study because components of their lifecycles occur solely or partially outside of the observable realm of researchers. Advances in biologging tags have begun to give us glimpses into these unobservable states. However, many of these tags require rigid attachment to animals, which normally requires catching and restraining the animals. These methods become prohibitive with large, dangerous, or rare species, such as large predatory sharks, and can have significant consequences for individual survival and behaviour. Therefore, there is a need for methods and hardware to non-invasively and rigidly attach biologging tags to sharks that present limited effects on the animals and researchers.

Scientists in the Azores islands of Portugal are gaining a new understanding into the lives of one of the ocean's most fascinating and mysterious creatures, the blue shark (Prionace glauca). Jorge Fontes, an Azorean native marine ecologist at Okeanos-UAc marine research centre, University of the Azores, leads a team of researchers studying these charismatic elasmobranchs in the Azores archipelago. Though recreational divers come from all over the world to see the memorizing sharks, not much is known about the natural history fine scale behaviour and habitat use. With the help of Fred Buyle, combining their amazing freediving skills with creative non-invasive attachment methods and state-of-the-art prototype data and video logging towed tags, Jorge Fontes has been pioneering the investigation of their fine-scale behavior and ecology, providing a new and unprecedented look into the life of these mysterious and elegant sharks.

The beauty of the new non-invasive tagging method lays on its simplicity. Like an underwater cowboy, the free divers place a self-releasing “lasso” that is retained on the shark’s pectoral fins as they constantly move forward to force the water flow through the gills, towing the low drag torpedo shaped camera tags and sensors. These innovative tags, rated to 2000 meters, combine multiple high frequency accelerometer, magnetometer, speed, depth, temperature sensors as well as HD video. At night and bellow 100 m, two red LEDs are triggered to allow a glimpse into the world of darkness that contrasts with the crystal-clear water at the top of the seamounts. Red lighting is designed to not impact the behaviour of both the sharks and their prey. After 24 or 48h, the lasso dissolves and the tag floats to the surface and to transmit satellite and radio beacons used to track and recover the tags for data download and recharge for the next deployment. Using these tools, the team will be able to learn some of their secrets.

Bold, respectful and talented, Fred Buyle has not finished surprising us.

·       Three sharks are killed by man every second as against five humans killed by sharks each year.

·       By targeting sick or wounded fish, sharks keep the ecosystem in balance.

·       Tens of tagged great white sharks led scientists to a remote mid-Pacific area where they gather for a few months. It was nicknamed the “White Shark Café”!

·       The thresher shark uses its surprisingly long caudal fin to whip and knock out its prey.

It normally remains up to 48 hours but it can also be more.

·      What is the list of the parameters detected with the tags?

We record high frequency (100 Hz; 100 measurements per second), 3D acceleration, gyro and magnetic heading, speed, depth and temperature. Moreover, when the shark surfaces for less than a second, its GPS position is recorded. We also collect the HD video with red lights in the camera tag version. We are interested in the vertical and horizontal behaviours, feeding and social interactions and energy use, based on the tail beats and speed essentially.

·      Are there any advances in miniaturization of these biologging tags? They seem very big for the animal.

We are currently looking for funding to miniaturize the tags. Anyway, the tags are super low drag, which signifies that we don’t add more than 5% drag and float to the animal, meaning we are limited to tagging blue sharks over 2.5 m long.

·      Is there a massive potential of animal-borne sensors to teach us about the oceans and global warming?

Yes. We are currently looking to integrate an O2 sensor in our tags to learn how the deoxygenation of the oceans due to warming, and excess of CO2 will affect deep diving sharks that forage at depth for example. Devil rays and whale sharks also dive very deep, possibly to forage or to orient themselves over long migrations. Therefore, if O2 is depleted at depth, it will be a barrier for these guys.

·      Sometimes an animal's mood makes all the difference. Are they surprisingly easy to tag - if you can catch them at the right time?

Indeed, we can only tag the animals that are “in the mood”. If we try to impose our methods, the animal will just swim away, therefore yes, we depend on the animal’s attitude and character.

It is hard to say, because chumming to attract can range from 10 min to 4-5 hours. It is very variable and depends a lot on the behaviour and abundance of sharks in the area.

·      Apparently, researchers have developed a huge variety of workarounds and electronic tags. Can you tell us more about what’s available for scientists today?

Today the most popular technology used are the acoustic tags (they output a “ping” that needs to be tracked with a hydrophone - active following or a network of stations) and satellite tracking tags. The most used sat tags are spots (ping position when at the surface for a few minutes) and PAT archival tags, that measure and archive (over months) depth, temperature and light levels. In the end, the stored information is sent to a satellite and to the researcher. Light levels can be used to estimate movement tracks over large scales (ocean wide), but the error is significant at smaller scales. There is a number of custom-made tags that have similar sensors as we have but are all for fixed attachment, and you normally need to fish and restrain the shark. If it’s a big shark and you can approach, they can be attached to the dorsal fin with a clamp.

·      Can you show us a chart or any results of a successful tag monitoring?

This is relatively complex as there are many variables being measured. Below is an example regarding the depth and tail beet cycles of a tiger shark we did recently in Hawaii.