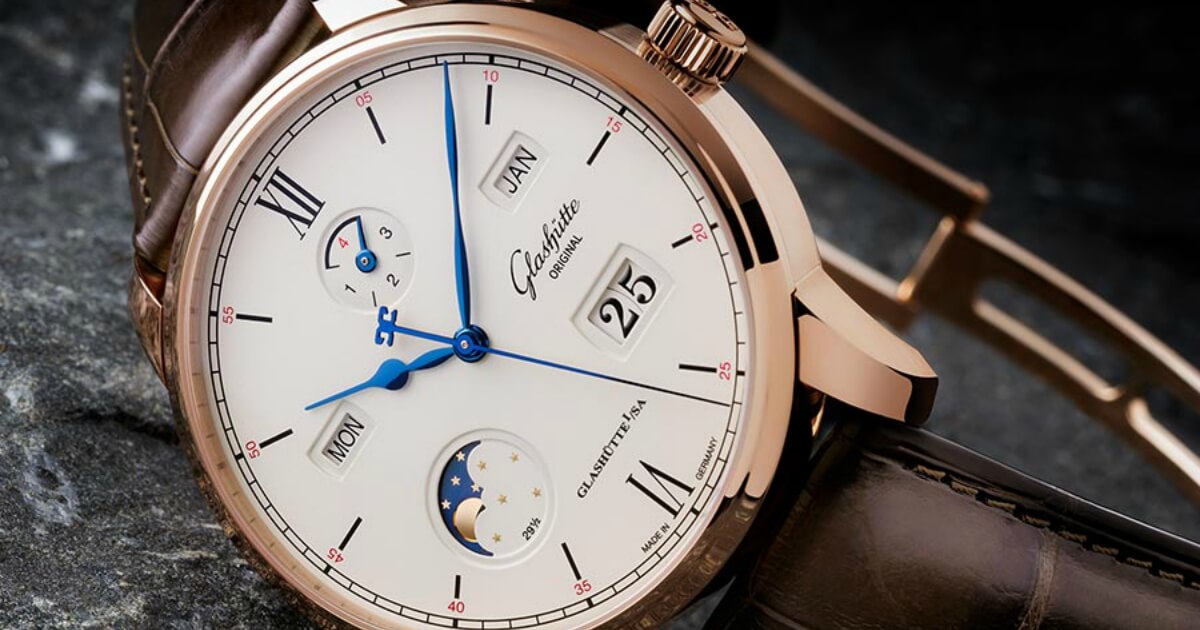 The most recent example of a German art of watchmaking that is as unmistakable as it is ambitious: The Senator Excellence Perpetual Calendar, available worldwide this fall, cannot deny its origins. Originality and excellence - the effort to achieve exceptional performance - are two themes that have always been characteristic of Glashutte Original. They are also perfectly complementary objectives, as a glance through a watchmaker's loupe at the Senator Excellence Perpetual Calendar reveals.

No complication is more closely associated with the brand than the renowned Panorama Date, which celebrates its 20th anniversary this year. Since 1997 at Glashutte Original two numerical discs mounted concentrically on the same level ensure that the "big date" can be read at a glance, without interference from a vertical separation bar. On the Senator Excellence Perpetual Calendar, gently curved Arabic numerals, a background hue matching that of the dial and a stepped passe-partout window at 4 o'clock lend the popular display a stylish appearance.

Hidden beneath the surface lies a complex mechanism that must overcome a number of different challenges. How, for example, can the gradual date change mechanism automatically show the first of the month without the wearer having to intervene? In this case the cleverly designed assembly around the multi-part 31-day gear serves as a mechanical memory: by means of a strategically placed recess in its fine-toothed units wheel it ensures, among other things, that on the 31st of the month the numeral 1 on the date wheel remains immobile. In turn, the so-called decimal wheel needs only four clearly visible teeth to govern the first numeral of the date: three equal sections - for the days 0109, 10-19 and 20-29 - are followed by a sharply reduced segment. This ensures that the numeral 3's brief guest appearance in the first of the date positions is quickly terminated.

The moon phase complication, rich in tradition, has long held a special place in the history and collection of Glashutte Original.

This is due in part to its unique combination of artistic and technical elements: It affords the Saxon manufactory an exceptional opportunity to combine the skills of its in-house dialmaker with the expertise of its watchmakers.

For the appearance of a gold-coloured moon against heavenly blue skies the dial experts make use - as in the version with the red gold case - of a thin bronze disc as a canvas. The stars are carefully printed on the ground and polished surface using a protective lacquer. After the entire surface has been rendered matte using sandblasting and then galvanised blue, the protective lacquer is dissolved, revealing the brilliant silhouette of the stars. Following application of a further coat of protective lacquer, in a final step two round full moons are cut with specially honed diamond-tipped tools; the interim protective lacquer is then replaced by the definitive cellulose lacquer. There is good reason for the Senator Excellence Perpetual Calendar seeing not one, but two moons rise: Its moon wheel has 59 teeth and advances one position each day. This makes it possible to display, in the gently curved dial window at 8 o'clock, a moon cycle of precisely 29.5 days, using the two moons in alternating shifts; the transition remains invisible to the wearer.

The Senator Excellence Perpetual Calendar offers proof of its originality at first glance. The implementation of the calendar functions using display windows rather than pointers lends this classic grand complication an elegant, understated and yet unmistakable appearance with undisputed scarcity value. The clear, clean design can easily lead one to underestimate the exceptional complexity hidden beneath the silver-grained dial. Nevertheless there is good reason to consider the Perpetual Calendar one of the most significant challenges of the watchmaker's art.

It features numerous sophisticated features. Among its remarkable talents is doubtless its ability to display and account for leap years. The mechanism's crucial hub and pivot point - literally - is a central, multi-arm lever: in refined interplay with the 24-hour wheel, month disc and 31-day gear it ensures that the mechanical calendar adjusts the displays simultaneously, at the right point in time, and not just by one but by two, three or even four positions (from 28 February to 1 March). The information regarding leap years and the length of the months comes from a multi-part cam wheel: mounted above its month disc, with its clear recess for the month of February, is the so-called February-cam.

This performs but one revolution in four years. There is reason enough for all this forethought: only once in four years does its single tooth lie precisely aligned with the February mark on the month disc below, assuming, as in punch card technology, something of its depth: exactly on February 29th in a leap year.

As complex as the refined mechanics of the movement appear, it is remarkably easy to access the various functions. Discreet correctors on the case permit the individual adjustment of weekday, month and moon phase displays. The universal corrector makes it possible to adjust the day, date and month simultaneously - if necessary (thanks to the exceptional 100-hour power reserve the displays retain the correct configuration long after the owner has set the watch aside).

The Perpetual Calendar is the most recent highlight of the steadily growing Senator Excellence family, available in a three-hand model, with Panorama Date, and with Panorama Date and moon phase complications. All models are equipped with the manufactory Calibre 36 and feature exceptional qualities in terms of precision, stability, running time and beauty. Their claim to quality is backed up by an exclusive certificate confirming that every single Senator Excellence has been subjected to an extremely demanding 24-day test cycle in the Saxon manufactory. A special engraving on the case back serves as a Seal of Quality for each watch. An exclusive online portal gives the owner access to comprehensive information regarding the testing procedures and individual test results for his watch.

The Senator Excellence Perpetual Calendar is available at Glashutte Original Boutiques worldwide and from the German watchmaker's international retail partners.