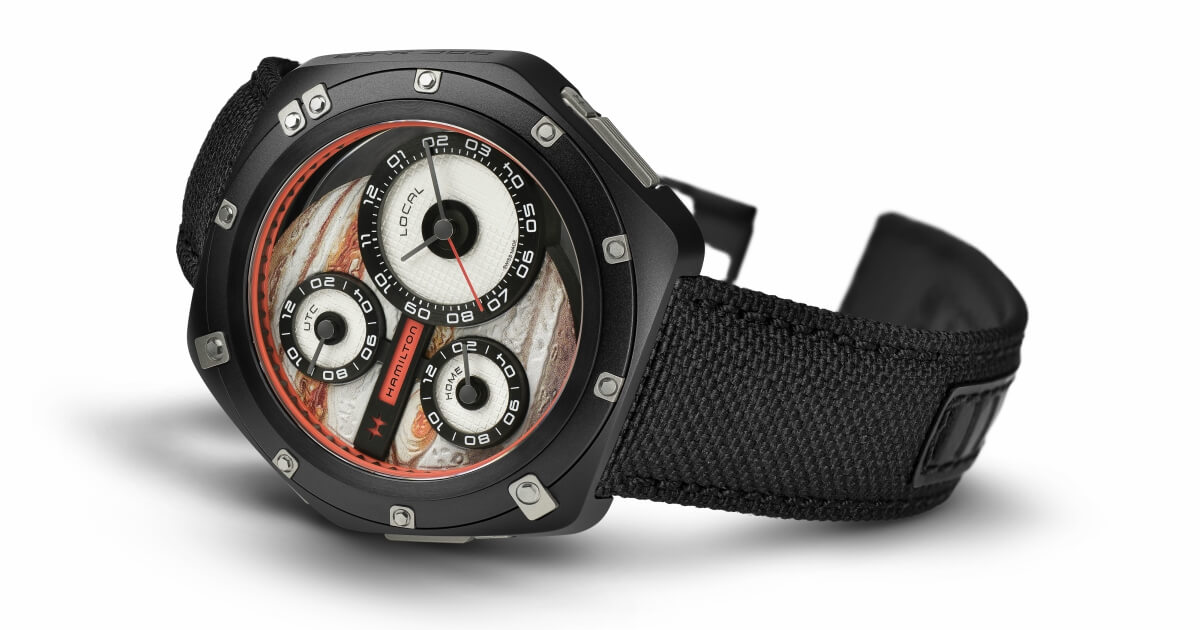 While there is nothing unusual about movie makers looking for the perfect watch to seamlessly symbolize their characters, 2017 will come with an unprecedented opportunity for the most intrepid props director as watchmaker Hamilton launches the ODC X-03 – a masterpiece of futuristic daring.

Hamilton’s relationship with Hollywood began in 1951 – underwater – when actors playing naval diving heroes wore Hamilton watches in the Oscar-nominated movie The Frogmen. From this point on, Hamilton continued to develop relationships with film makers and prop masters to deliver watches that perfectly embody the image they have of their characters. To date, the brand’s partnerships with 2001: A Space Odyssey and Interstellar have been among the biggest Hollywood milestones in the brand’s history.

Hamilton has decided to celebrate these two iconic blockbusters with the creation of an outstandingly daring timepiece, the ODC X-03.  Inspired by Interstellar’s Endurance spaceship, the ODC X-03 is the result of a landslide meeting at the 2014 Hamilton Behind the Camera Awards (BTCA) hosted annually by the brand alternatively in Los Angeles and China. The ensuing watch designed by Interstellar production designer, three times Oscar-nominated Nathan Crowley, takes stellar watches into a whole other galaxy. With traditional Hamilton quality, craftsmanship, reliability and stunning good looks, the sleek Swiss Made ODC X-03 presents a masterpiece that is truly ahead of its time.

The ODC X-03 is the third in a trilogy of watches that has its roots in Stanley Kubrick’s 2001: A Space Odyssey. Launched in 2006 and 2009 respectively, the X-01 and X-02 were also inspired by what is widely regarded as one of the greatest and most influential movies of all time. Echoing its older sibling, the X-02, the ODC X-03 is driven by three different movements (an automatic ETA 2671 and two identical quartz ETA 901.001), in a robust 49 mm by 52 mm hexagonal case in titanium with space black PVD coating.

In an adventurous sleight of design, the dial features three sub-dials orbiting Jupiter in an elegant tribute to Kubrick’s blockbuster. Over 120 operations were needed to build this futuristic dial, using some of the latest technologies such as 3D printing and laser engraving.

Every detail was thoroughly conceived to meet the space-age design of the watch, from the black galvanic rings around the sub-dials to gaskets and rivets inspired by Endurance spaceship. The crowns are seamlessly integrated into the case, while the case-back is artfully engraved with key facts on mighty Jupiter, for example size and temperature. To round off this pioneering timepiece, a textile strap with leather lining ensures maximum comfort for the most intrepid astronaut.

Artfully combining American spirit with Swiss precision, and complete with appropriately modern packaging, the ODC X-03 is available as a 999-piece limited edition. In the build-up to the brand’s latest odyssey to join the sparkling constellation of the greatest stars in watchmaking, the watch will be launched in 2017.