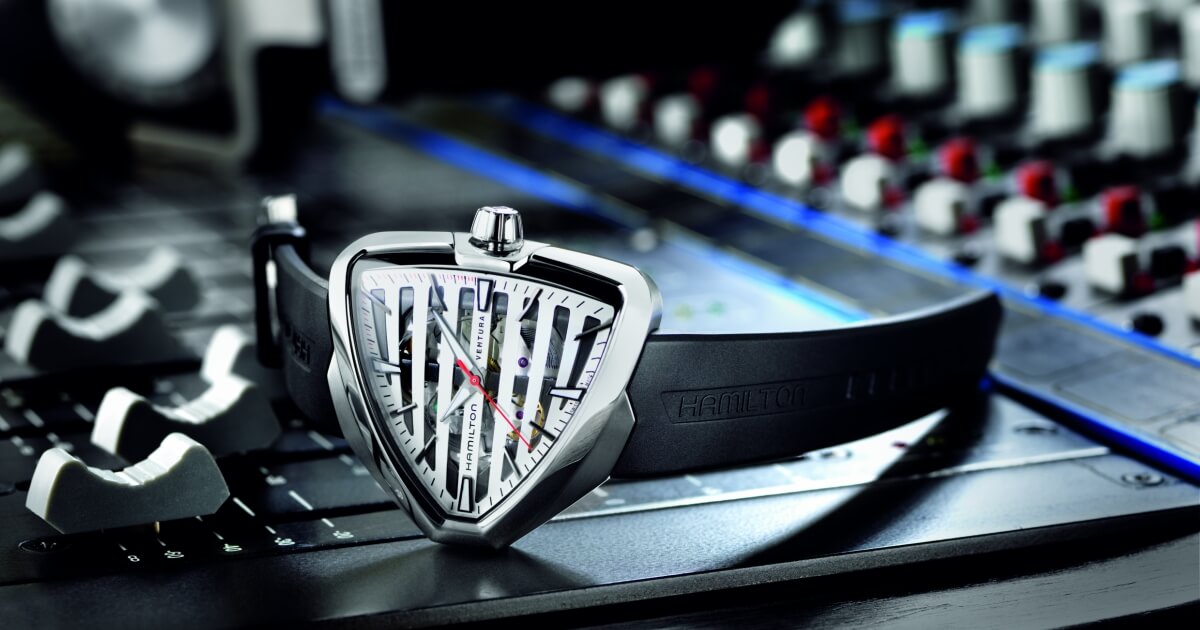 In 2017 Hamilton commemorates the 60th anniversary of its iconic Ventura watch line with the launch of three reinterpretations of the original model.

Introduced on January 3rd, 1957, the Ventura was not only progressive in design, but also made watchmaking history as the world’s first electrical, battery powered watch. A revolutionary movement in a revolutionary design, the Ventura was unique in many ways and attracted some famous watch fans such as Elvis Presley himself who wore it in Blue Hawaii in 1961.

Mirroring the unconventional case design detail and distinctive features of its ancestors, in 2017, the Ventura Classic and Ventura Elvis80 Skeleton form the backbone of a magnificent trio in which each variation symbolizes the past, present and future of Ventura.  And as a remembrance of things past, each dial on the Ventura Classic bears a large electricity symbol as a reminder of the breakthrough innovation that the world’s first electrical watch in 1957 represented.

Within this celebratory trilogy, the past meets the present with a tribute piece in quartz with a yellow gold PVD stainless steel case. In an additional flash of acknowledgement to Ventura’s illustrious past, a brown teju-patterned leather strap, white dial with golden hour markers and hands and flash of red at the tip of the second hand provide an unmistakable touch of vintage elegance.

How to reinterpret a timeless piece to make it relevant today? By using timeless materials. Denim, a popular fabric in the 50s during Ventura’s birth, has crossed the ages without ever going out of style. For Ventura, it has been adapted onto the strap, while the polished stainless steel case frames a jeans-pattern 3D-printed dial for an additional touch of modernity.

When released in 1957, the Ventura was considered quite futuristic. Playing on the symbolism of this projection, the final interpretation displays an ultramodern skeleton design which could resemble the King’s microphone when looking at it closely.

Peering through the geometrical crisscross dial, the viewer can catch the mesmerizing show of the automatic movement with 80 hours power reserve, stylishly decorated on the front, beating to the sound of possibly distant rock music. A gleaming stainless steel case and choice of black rubber or steel bracelet complete the speaker-inspired look of this timepiece made for the scene.

Whether past, present or future, each Ventura iteration is loyal to the collection’s heritage and Hamilton’s American Spirit, and contributes to keeping the iconic timepiece renowned for many decades to come...

The price for the  Hamilton Ventura Skeleton is CHF 1600.00.