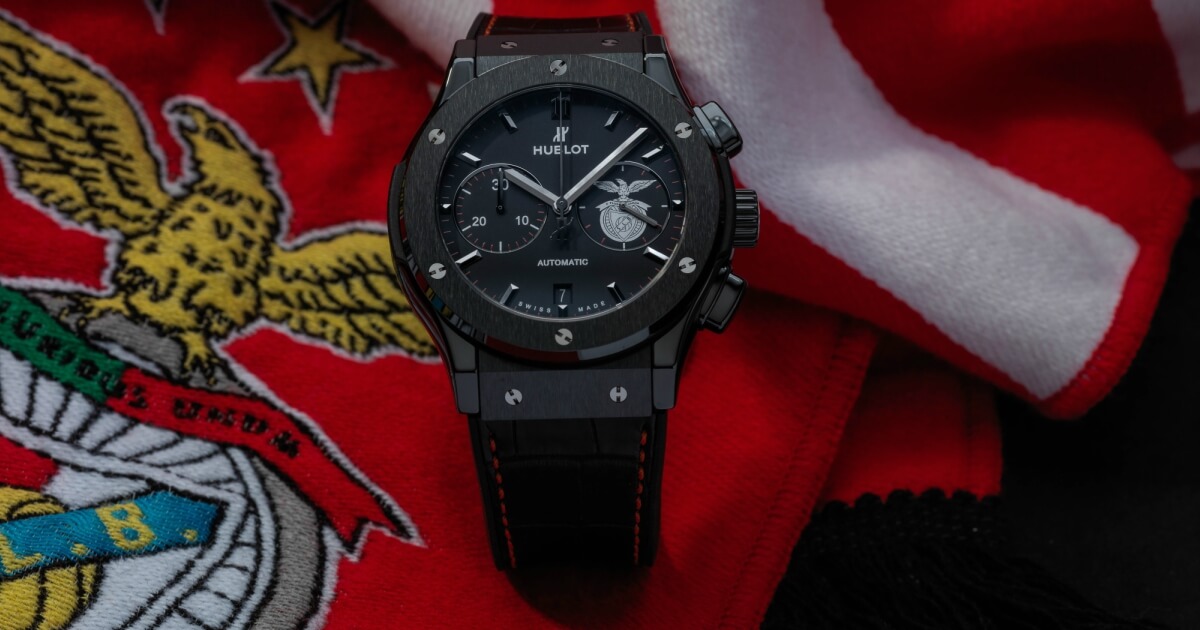 E pluribus unum - Out of many, one The motto of Sport Lisboa e Benfica dates back 113 years. A symbol of Portugal's most successful club with the biggest international fan base, counting more than 6 million supporters. A common passion that carries Benfica to even greater success. A club whose victories are now counted in Hublot time, with its Classic Fusion Chronograph "Sport Lisboa E Benfica".

The "Reds", led by coach Rui Vitoria, are getting in step with Hublot time. Hublot has become the Official Timekeeper of the most successful Portuguese club, winner of 77 trophies. Over its 113 years, the club has won 35 Portuguese league titles, 25 Portuguese Cups, 7 League Cups, 6 Super Cups and 2 Champions League titles. Benfica is the only club to have won all of the domestic competitions in 2013/14. As well as being the European club with the most supporters, it's also the most popular Portuguese club, holding the world record for the most members, at more than six million. Holder of the Portuguese League Cup and League title, the club has finished each season since 2010 as winner or runner-up in the Liga NOS, the Portuguese top flight.

Founded in 1904 by a group of football lovers and former pupils, the small club from Lisbon has come a long way. This club of legends and traditions, nicknamed "O Glorioso" in homage to its success and prizes, now sees its Aguia Vitoria eagle, which soars over the "Stadium of Light" before each home match, come to rest on the Classic Fusion Chronograph "Sport Lisboa E Benfica". Legend has it that if the eagle flies around the ground twice before landing on the club's shield, Benfica will win the match. On benfiquistas' wrists, at the heart of the "Cathedral" and in all benfiquista homes around the world - SL Benfica has supporters' clubs and in many different countries - victories are measured in Hublot time.

In honour of a thousand-year-old art which has become a symbol of Portugal, the artist Diogo Machado (also known as Add Fuel) has produced his own take on the famous azulejos - the patterned earthenware tiles used to decorate buildings, all throughout the country. In a contemporary rendering that reveals a sense of humour and an impressive eye for detail, the Portuguese artist has created the story of the Hublot-Benfica partnership directly onto the ceramic. The work incorporates the representation of an eagle, motifs inspired by watch mechanisms, the club's own red colour and the impression of torn and overlaid images that characterise his works. Presented by the artist to mark the announcement of the partnership, the azulejo will preside over the club's destiny from the heart of the Hublot lounge.

In a black ceramic case, the chronograph counter, minute track and strap in alligator leather sewn onto natural rubber are punctuated by the eye-catching colour scheme sported by the "Reds". Beating to the rhythm of 28,800 vibrations per hour, its HUB1143 self-winding mechanical movement has a 42-hour power reserve, enough to allow supporters to watch almost 28 matches in a row! The  watch will be produced in 113 pieces.