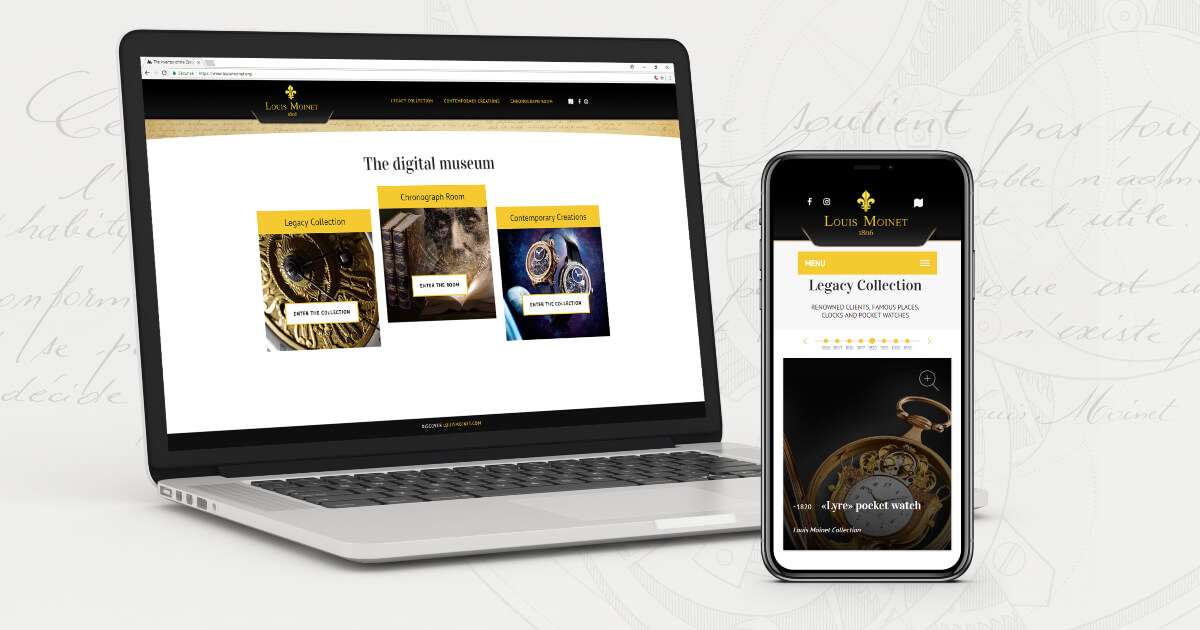 “We’ve decided to pay Louis Moinet a very special tribute on the 250th anniversary of his birth, providing the opportunity for as many people as possible to discover his works through a properly documented, permanent display with unlimited access. Indeed our Digital Museum is set to become one of the cornerstones of our mission: restoring Louis Moinet’s name to its rightful place in the watchmakers’ pantheon.” - Jean-Marie Schaller.

Ateliers Louis Moinet is one of the few fully-independent firms to have such a well-preserved heritage. The firm’s collection is also one of the most extensive: several dozen period pieces, signed by Louis Moinet’s own hand, all of them fully authenticated, and most of them in full working order. The independent Ateliers, whose policy of acquiring these pieces was first implemented some fifteen years ago, can be rightfully proud of this outstanding historic legacy.

These heirlooms from the great century of watchmaking have so far been visible in two types of venue. First of all, there is the Ateliers’ head office in Saint-Blaise, Neuchâtel, Switzerland. Here Mr Louis Moinet’s clocks and precision instruments (including his 1816 Compteur de Tierces, the first certified chronograph in history) are documented, analysed, and restored by exceptional master watchmakers and craftsmen, including some vanishingly rare specialists, some working with agate, others skilled in mercury gilding, lavishing their most attentive care on this unique heritage and protecting its original character.

Louis Moinet’s treasures are also to be found in prestigious locations where the watchmaker was welcomed in his day, such as the White House and the Court of TsarAlexander I – most of the treasures of which are now in the Hermitage Museum.Over two centuries after dignitaries commissioned work from Louis Moinet, a large number of his clocks are still to be found in these palaces and museums, witnesses to diplomatic history at a time when the watchmaking art formed part of the trappings of politics, embodying the power and culture of sovereigns and presidents alike.

Now, in 2018, exactly 250 years after the birth of Louis Moinet in Bourges in 1768, there will be a third venue where it will be possible to learn all about his contribution to the art of watchmaking: a Digital Museum. “We’ve been working on this project for a year now. We wanted something that would be accessible from everywhere, perfectly documented, and provide as full a presentation as possible of Louis Moinet’s contribution to his century and those that followed,” explains Jean-Marie Schaller. “While he is now recognised as being the certified inventor of the chronograph (1816), we’ve also sought to give just as much exposure to his lesser-known creations, in particular his Traitéd’ Horlogerie, which is also celebrating an anniversary this year (2018 marks the 170th anniversary of its first publication in 1848), as well as his clocks and pocket watches.”

The Digital Museum is going online for the 250th anniversary of Louis Moinet’s birth, atwww.louismoinet.org. The Museum already includes 150 photos of the watchmaker’s greatest achievements. The site is designed to remain online permanently, and be regularly updated by the Ateliers. It’s a first in watchmaking; a rare initiative by a fully-independent firm. However, the idea is not to feature absolutely all of Louis Moinet’s works there, just as there’s no museum in the world that presents the entire career of a sculptor or painter in the same place, at the same time, all the time. In this respect, the Louis Moinet Digital Museum is just like any other museum in the world: a select, properly documented expression of the artist’s main achievements, raising awareness of his genius.