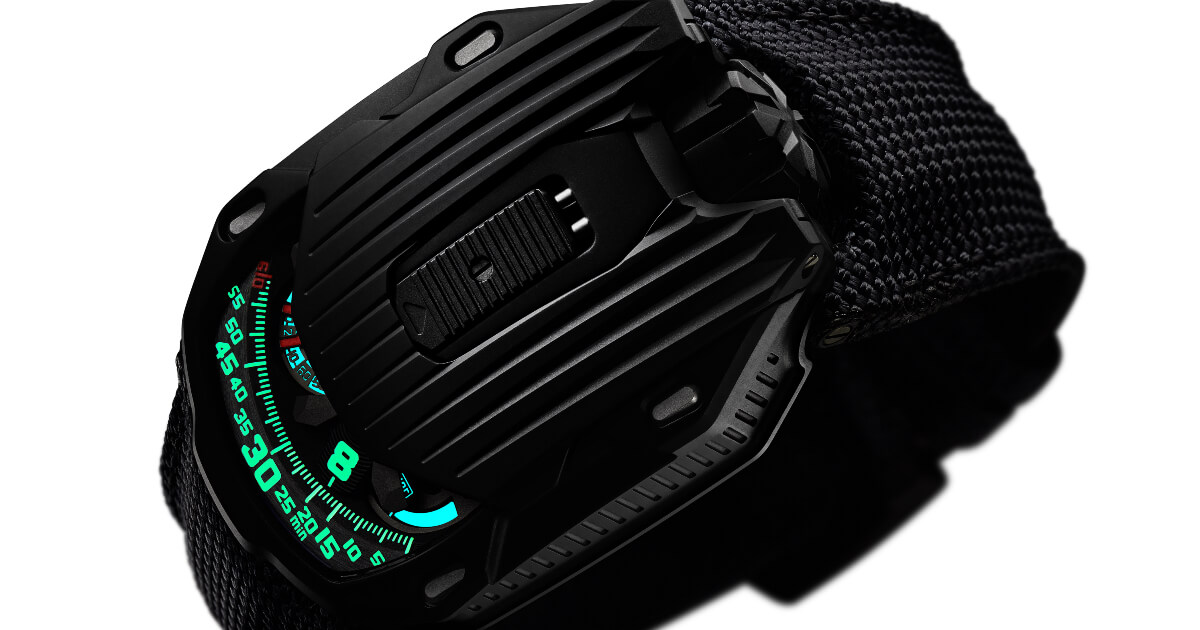 Introducing: The Urwerk UR-105 CT Kryptonite

There are several features that set Urwerk watches apart from any other product of the luxury watch sector. The most obvious is of course Urwerk’s trademark satellite wandering-hours indication. Equally unmistakeable is the shape of the case with its imposing crown at 12 o'clock. The more perspective might also remark on the liberal use of SuperLuminova lighting up the indications on the dial. This is more than a creative whim by the brand’s creators; it harks back to the source of their inspiration: the 17th century night clocks made by the Campani brothers.

“It’s one of the stories my horologist father told me as a child,” recounts watchmaker Felix Baumgartner the brand’s co-founder. “He was fascinated by the stories associated with the historical timepieces he restored. According to the legend, the Pope ordered a special clock from the Campani brothers. It had to tell the time in the dark when he celebrated the divine offices at night. But the clock had to be silent so as not to disturb the Pope when he slept, while the time had to be immediately visible. The Campani brothers produced the so-called “wandering hour” clock in which the hands were replaced by hour numerals that successively traversed a scale of 60 minutes. The passing hours were illuminated from within the clock by a candle. Needless to say, many of these clocks, made largely of wood, caught fire, and the system fell into disuse, but one survivor was sent to my father for restoration. I found it fascinating.”

One of the fundamental requirements of every Urwerk watch is to show the time clearly in the dark. “I enjoy the idea of fulfilling the Pope’s specifications,” says Martin Frei, Urwerk’s co-founder and chief designer. “By preserving its original DNA, we have kept the concept alive.”

Luminosity is at the heart of Urwerk’s latest creation. Its name “Kryptonite” derives from the intense green light emitted from the hour markers. But far from having the baleful effect of the mythical meteorite, it’s a perfect colour match for the watchcase. “The contrast between the matt, AlTiN-coated case and the vivid phosphorescence of the numerals is astonishing,” Martin continues. “Try it yourself. Charge up the SuperLuminova, then go into a dark room. Your UR-105 CT will show you the way.”

In addition to its mesmerising effect, the UR-105 CT “Kryptonite” is first of all a beautiful object that fits snugly in the palm of your hand. Its unique shape is a remarkable octagon with deep grooves along its length. The Art Deco influences are apparent in its geometric angularity and symmetry. As Martin Frei explains, “the Kryptonite has a minimalist look with clean lines and without decorative frills. It is structured vertically because on paper I imagined the Empire State Building, the Chrysler or the Comcast skyscrapers stretching forever upwards, but with a sombre look, more like Gotham City.”

You have to slide the catch on the top of the case to reveal the mechanism of the UR-105 CT. It’s a wandering hour indication based on a new openwork carousel, which carries the four satellites, each bearing three numerals for the hours. The hours successively sweep past the minutes scale for an analogue and digital display of the time. According to Felix Baumgartner, “the UR-105 CT is a watch of an evolved design. When it is closed, it looks austere, with only the time indication visible. Open the cover and you delve into a metallic environment that is quite cold, yet you perceive a notion of speed and an effort at efficiency. The carousel has been completely redesigned with efficiency in mind, becoming ultra-light and ultra-rigid.”

A power-reserve indicator and digital seconds make up the rest of the information displayed on the dial. The digital seconds are remarkable in that they indicate tens of seconds. The mechanism was made using a photolithographic process, with each marker openworked to make it as light as possible. It thus weighs less than a tenth of a gram.

Two pneumatic turbines on the back govern the selfwinding rate, which can be set with a lever. In the FULL position, the slightest movement of the wrist is harnessed to rewind the barrel springs. Turn the lever to STOP to disengage the selfwinding system and wind up the UR-105 using the crown. If you are particularly active, select the intermediate position, RED (for reduced). This engages the turbines to dampen the winding rotor and avoid overstressing the mainspring.

Materials: UR-105 CT hunter case in titanium, coated with AlTiN