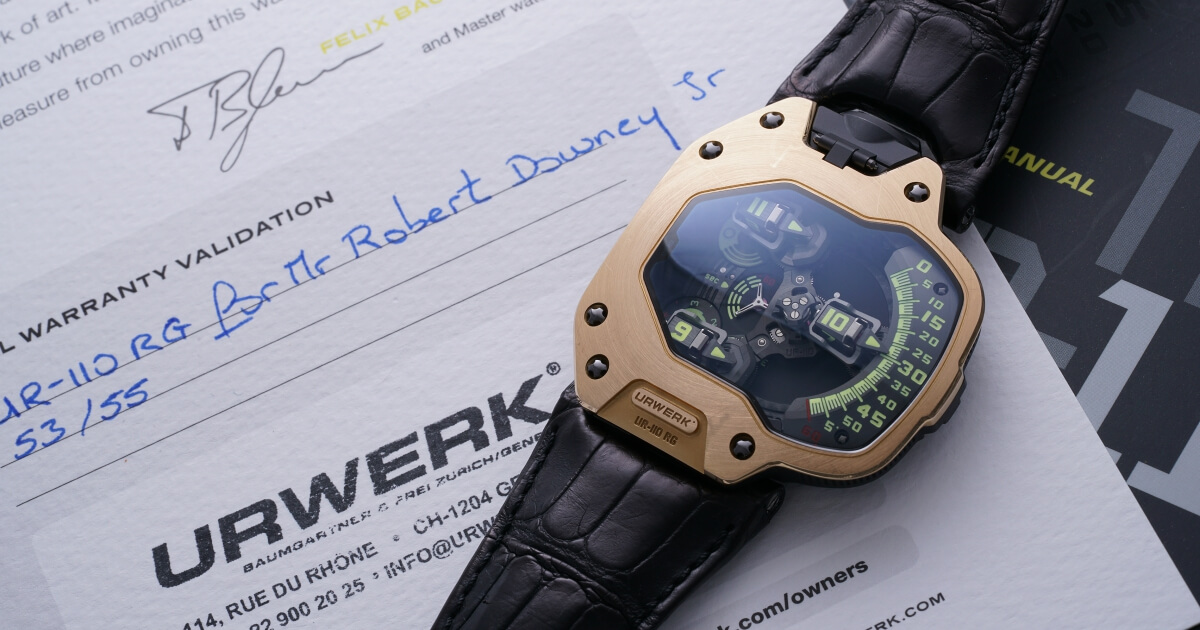 Iron Man’s Urwerk Ref. UR-110RG To Be Sold By Phillips In Association With Bacs & Russo

Featured in 'Spiderman: Homecoming', this Urwerk Reference UR-110RG—to be sold to benefit Manusodany, a Haitian non-profit organization—was chosen by actor and watch collector Robert Downey Jr. for his portrayal of Tony Stark.

Some watches will forever be remembered for their cameos on the silver screen. The Rolex Submariner is unmistakably known as James Bond’s watch. The Heuer Monaco remains associated with Steve McQueen and the film Le Mans to this day. Even the unusual Seiko Chronograph worn by Sigourney Weaver in Aliens will go down as a movie icon.

Last year, another extraordinary and rare watch was seen by millions of viewers for the first time following its big screen debut. The Urwerk UR-110RG worn by Robert Downey Jr. in Spiderman: Homecoming wasn’t just part of the actor’s wardrobe, it was one the many gadgets used throughout the film by his characters, Tony Stark and Iron Man4. A fan of Urwerk himself, Downey Jr. personally identified the UR-110RG as a perfect fit for the genius billionaire- turned-superhero, but the watch almost never made it to the set.

Launched seven years ago, the UR-110 was an instant hit with watch enthusiasts. It presented a brilliant new take on the wandering hours complication, packaged inside a asymmetrical watch made in titanium. Here was a little-known watchmaker with just a few models in its collection, boldly introducing another avant-garde design inspired by space travel and science fiction — making its indelible mark in the Swiss watchmaking industry.

The UR-110 remained a staple in the young brand’s collection with several versions made, always in very limited numbers, including the award winning UR-110 Titanium which took home the Best Design prize at the 2011 edition of the Grand Prix de I’Horlogerie de Genéve.

Little did they know one of the most famous names in Hollywood was one of their patrons. A self-confessed watch enthusiast, Robert Downey Jr. has a noteworthy collection which he has shared publically in the past, and his passion for mechanical watches is now seeping into his movie projects.

A few months before filming Spiderman: Homecoming, Downey Jr. asked the film’s costume department to source a UR-110 in rose gold - the colours of Iron Man. Now this was a watch Tony Stark would wear the hell out of.

A call was placed to source a rose gold version for the duration of the film shoot but Urwerk originally turned down the studio’s offer, suspecting it to be a prank call, or perhaps even worse, a project motivated by strictly commercial motivations.

Their position changed quickly when they heard Downey Jr. had asked for the watch personally. Weeks later, the company’s press manager flew from Geneva to Pinewood Studios in Los Angeles to hand-deliver a brand new UR-110 RG.

“It’s just one of those unexpected stories that make life such a thrill,” said Urwerk’s CEO, Felix Baumgartner. “With my team, we often give our watches nicknames. Blade Runner and Godzilla are both names we use internally for some of our watches but nothing really stuck to the UR-110 until we received this unbelievable proposition. Our UR-110 on the wrist of Tony Stark! A character that is eccentric and passionate about science, and totally cool. That’s exactly the kind of person we wanted for this watch, but he’s the one who found us!”

Robert Downey Jr. wore the watch throughout the shooting of the film before returning it to Urwerk. The watch is featured regularly on Tony Stark’s wrist, and in one particular scene, is used as a functional gadget for Iron Man. The watchmaker was so pleased with the outcome of the project that it made a second, identical model in rose gold, and gifted it to Downey Jr.

Meanwhile, the actor and the watchmaker began discussing the fate of Iron Man’s watch and eventually decided to give the public an opportunity to acquire the superhero’s watch, featured in one of the most popular movies of the past decade, in order to help raise funds for Manusodany, a non-profit organization which helps fund development projects for disadvantaged individuals of Haiti.

The UR-110RG will be one of the highlights of the Geneva Watch Auction: SEVEN, taking place on May 12-13, at the Hotel La Reserve, in Geneva. The watch is being offered with the original box and papers that were made before the watch was delivered to the actor. As with all Urwerk watches sold at auction, the watchmaker is also offering a complementary service on the watch.

“Iron Man’s Watch” will be included as part of the international World Tour of Geneva Watch Auction: SEVEN at the following locations:

Singapore, Malmaison by The Hour Glass, April 4 to 8

Los Angeles, The Apartment by The Line, April 11 to 13