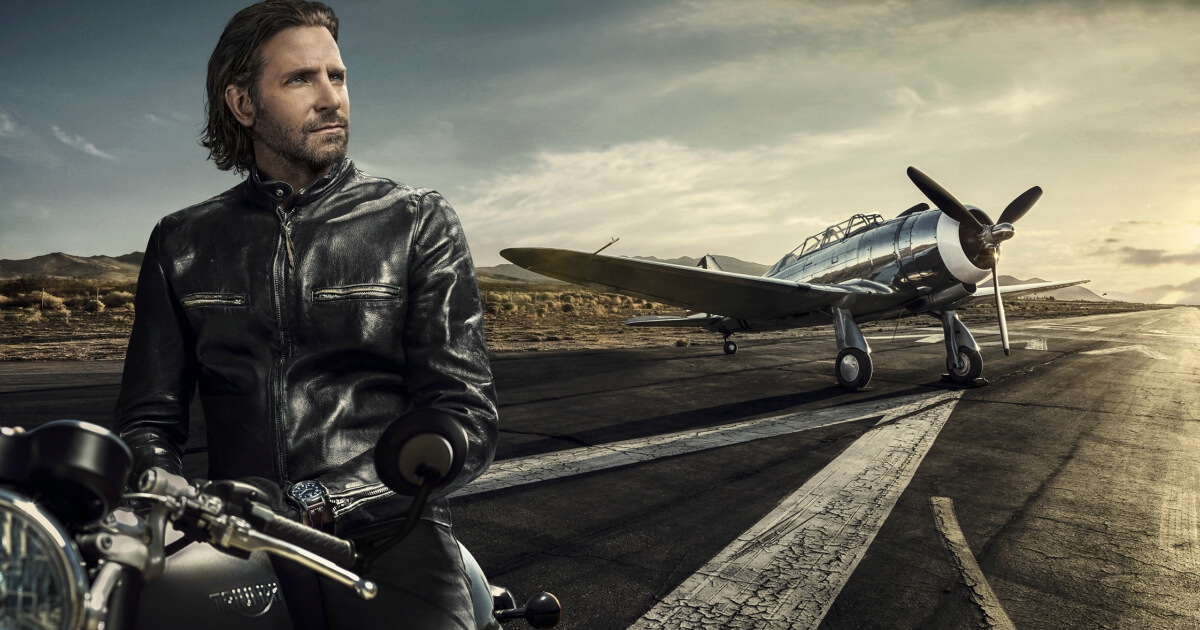 In April, IWC Schaffhausen will kick off a worldwide omnichannel advertising campaign with actor Bradley Cooper. This is the first time that the Swiss luxury watch manufacturer has produced such an extensive on and offline campaign with a single ambassador as the face of the brand. Shot in the desert outside Los Angeles, the campaign features strong imagery such as Cooper on a motorbike in front of a vintage aeroplane. It underscores IWC's appeal to free-spirited individuals who dislike borders and limits and are eager to take on challenges instead. With the Big Pilot's Watch Edition "Le Petit Prince", the advertisements also feature one of the most iconic timepieces from the Schaffhausen-based company.

At the Salon International de la Haute Horlogerie (SIHH) held in Geneva in January, IWC Schaffhausen welcomed Bradley Cooper as a new brand ambassador. Now, the Swiss luxury watch manufacturer is strengthening the partnership by rolling out a comprehensive marketing campaign with the four-time Oscar nominee. This marks the first time that IWC has produced such an extensive omnichannel campaign with one brand ambassador.

Bradley Cooper is no stranger to the IWC brand: "I have been wearing IWC watches for the past 15 years. When this collaboration was proposed and the idea of the campaign came up, it made sense and I was excited by the creative. I was happy to help bring Christoph's vision to life." With a strong personality and character traits such as a pioneering spirit, confidence and vitality, Cooper perfectly embodies IWC's core values. "With this campaign, we continue to develop the emotional storytelling around our brand. We could not have imagined a better partner than Bradley to present our high-quality mechanical timepieces, such as our Pilot's Watches, to a growing and global audience," explains Christoph Grainger-Herr, CEO of IWC Schaffhausen.

The campaign was produced during a multi-day shoot on the outskirts of Los Angeles in the Mojave Desert. It centres on Bradley Cooper, seen riding his motorbike through the desert - fuelled only by his adventurous and free spirit. With the campaign story and visuals, IWC makes a bold statement, demonstrating that, thanks to its authenticity and uniqueness, it strongly appeals to individuals who are open-minded, curious and adventurous and who live life to the fullest. Swiss photographer Marco Grob shot the impressive visuals. Grob, who lives in New York City, is famous for his portraits, having worked with some of the biggest names in the entertainment industry.

One of the most iconic watches from Schaffhausen

The remarkable co-star of the campaign is the IWC Big Pilot's Watch Edition "Le Petit Prince" (Ref. IW501002) on Bradley Cooper's wrist. With an impressive case diameter of 46 millimetres, this timepiece features a characteristic blue dial, which has become the trademark of IWC's special editions in tribute to Antoine de Saint-Exupery's most famous literary work. The watch is powered by the IWC-manufactured 52110-calibre movement, featuring an efficient Pellaton automatic winding system with ceramic parts. With the help of two barrels, it builds up a power reserve of 7 days and its soft-iron inner case provides optimal protection against magnetic fields.