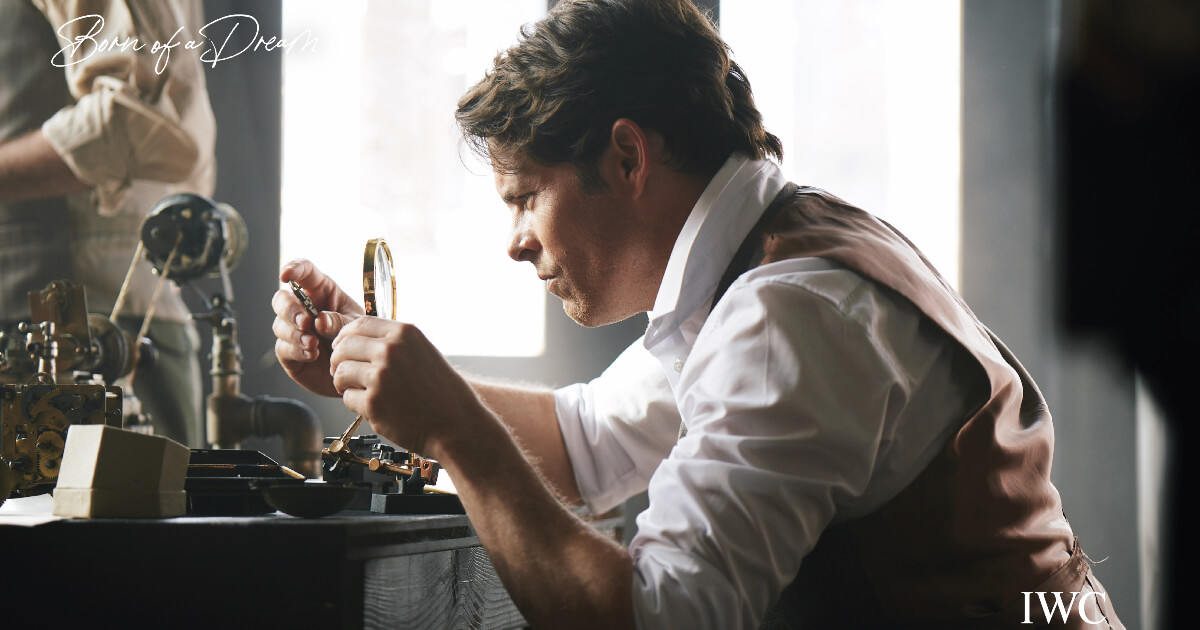 IWC Schaffhausen Presents Next Instalments Of “Born Of A Dream”

IWC Schaffhausen is proud to release “Born of a Dream: A Man of the Future”. In this new instalment of the ambitious short film project, the brand tells the story of its founder, Florentine Ariosto Jones, played here by actor and IWC brand ambassador James Marsden, as he established the company in Schaffhausen back in 1868. The way Jones overcame adversity and never gave up despite many obstacles mirrors the story of IWC brand ambassador Tom Brady, told in the previous instalment.

To further explore the parallels in the lives of the two men, IWC is also releasing a combined edit of both films, in which the stories of Brady and Jones are intertwined and told side by side – shedding a contemporary light on IWC’s founding story and the values the brand stands for.

In July, IWC released “Born of a Dream: A Boy from San Mateo,” an inspiring short film depicting IWC brand ambassador Tom Brady as he pursues his childhood dream and becomes a champion quarterback. Now, in another chapter, the Swiss luxury watch manufacturer focuses on the moving story of its founder, Florentine Ariosto Jones. A young watchmaker from Boston, Jones dreamed of combining advanced American industrial technology with traditional Swiss craftsmanship to produce pocket watches of the highest quality and precision. “Born of a Dream: A Man of the Future” follows Jones’ journey from Boston to Schaffhausen, as he establishes a pioneering watchmaking company in Switzerland in 1868. Although he was finally obliged to return to the USA, Jones’ fusion of American entrepreneurialism and Swiss precision continues to be at the core of the IWC brand.

“In their own time, F.A. Jones and Tom Brady both dared to dream the impossible. They showed passion and determination, always believed in themselves and never gave up. When we consider the founding story of our brand in the light of Tom Brady’s story, it becomes evident that working hard to realise one’s dreams has universal validity and is of timeless relevance. This also sheds a contemporary light on the core values that our brand stands for,” explained Franziska Gsell, Chief Marketing Officer at IWC Schaffhausen.

Like Jones, who he plays in the film project, James Marsden has worked hard to carve out a unique place in his field: Hollywood. Fresh from the standout role in Jeff Fowler’s highly successful live-action/animation hybrid film Sonic The Hedgehog, he can currently be seen in the second series of dark hit comedy Dead to Me on Net ix and as Congressman Phil Crane in FX series, Mrs. America. In addition to starring in countless films, including Shock and Awe, The D-Train, the X-Men Trilogy, Hairspray, The Notebook, Superman Returns and Enchanted, he also featured in the first two seasons of critically acclaimed sci-fi series, Westworld. Marsden has been an IWC brand ambassador since 2015.

“I am thrilled to be part of this project and be up on the screen with Tom to recount how he – and F.A. Jones – achieved what they did. It’s about setting your goals high, overcoming adversity and the importance of determination and hard work. Even though their stories take place over a century apart, it’s a timeless journey,” added Marsden.

In addition to “Born of a Dream: A Man of the Future”, IWC is also presenting a combined edit of the two short films. In this extended and more protracted version, the stories of Brady and Jones are skilfully intertwined. When told side by side, their real power and universal validity becomes even more evident. The combined version sheds a contemporary light on IWC’s founding story and underscores the timeless relevance of the core values the brand represents.

All full edits are exclusively available on IWC.COM where visitors are also offered an entry point to a dedicated content page – www.bornofadream.com – which provides a deep dive into the two storylines. Viewers will explore a unique insight into the lives of both Tom Brady and IWC founder F.A. Jones.