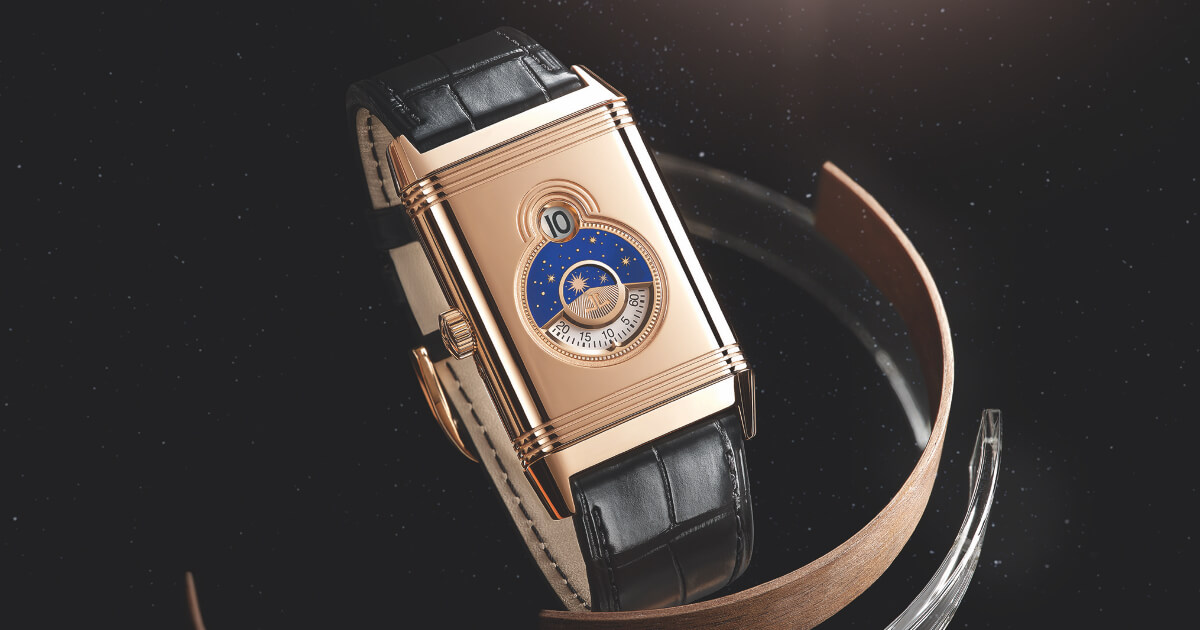 Ninety years ago, Jaeger-LeCoultre created the Reverso, an ingenious solution for polo players who wished to protect the glass of their watches while playing matches. With its swivelling case and distinctive Art Deco lines, it was to become a classic of 20th-century design. The Maison soon began to introduce new aesthetic variations of the Reverso but, for the first 60 years of its life, no mechanical complications were introduced; the Reverso remained a simple, time-only watch.

In 1991, 60 years after the Reverso’s creation, Jaeger-LeCoultre presented the Reverso Soixantième. With power reserve and date displays, it was the first Reverso with complications and the first with a sapphire crystal caseback, providing a window onto the mechanical treasure within. Although the Reverso case and its shaped movement had not initially been designed for complications, the Soixantième revealed its full potential, unleashing a sequence of pieces that gave new visual expression to the great watchmaking complications.

In 2021, nine decades after the Reverso was born, Jaeger-LeCoultre presents the latest episode in this story: the Reverso Tribute Nonantième, which gives a completely new visual expression to an alliance of several classical complications.

The front dial of the Nonantième exudes refinement and elegance. The pink gold case with its signature gadroons frames a silvered, sunray-brushed dial with applied golden indexes and Dauphine hands. In the lower half of the dial, a moonphase display is set within the circle formed by the small seconds counter. Beneath 12 o’clock is a large date display, framed by an applied filet of pink gold that echoes the rectangular shape of the dial and case.

The classically elegant aesthetic of the front dial gives no hint of the surprise concealed on the reverse side of the watch. Flipping the case over reveals an entirely new visual expression of some of watchmaking’s most familiar complications. Dramatic and captivating, it is unlike anything seen on a Reverso before.

The solid pink-gold caseback is dominated by two round apertures of different sizes, arranged like a figure-eight and encircled by gadroons that echo the rectilinear gadroons on the upper and lower edges of the case. The small upper aperture displays a semi-jumping digital hour indication. Seen for the first time in a Reverso, this complication recalls digital displays developed by the Manufacture for wristwatches in the 1930s.

In the large aperture below the hour, minutes are displayed on a rotating disc that is partially concealed by a three-quarter plate lacquered in vivid blue – in the Atelier des Métiers Rares – and sprinkled with tiny golden stars to depict the night sky. Within a small circle at the centre, an applied golden sun and moon, pass above a horizon, to indicate night and day. In the semi-circle below the horizon, a JL logo is set on a sunray-pattern background.

As is the case for all complicated Reverso models, Jaeger-LeCoultre’s engineers developed an entirely new, manually wound movement for the Nonantième, Calibre 826. Comprising 230 components and showing the same time on both faces of the watch, it offers a power reserve of 42 hours.

The Reverso Tribute Nonantième is offered in a limited edition of 190 pieces, available exclusively at Jaeger-LeCoultre boutiques.