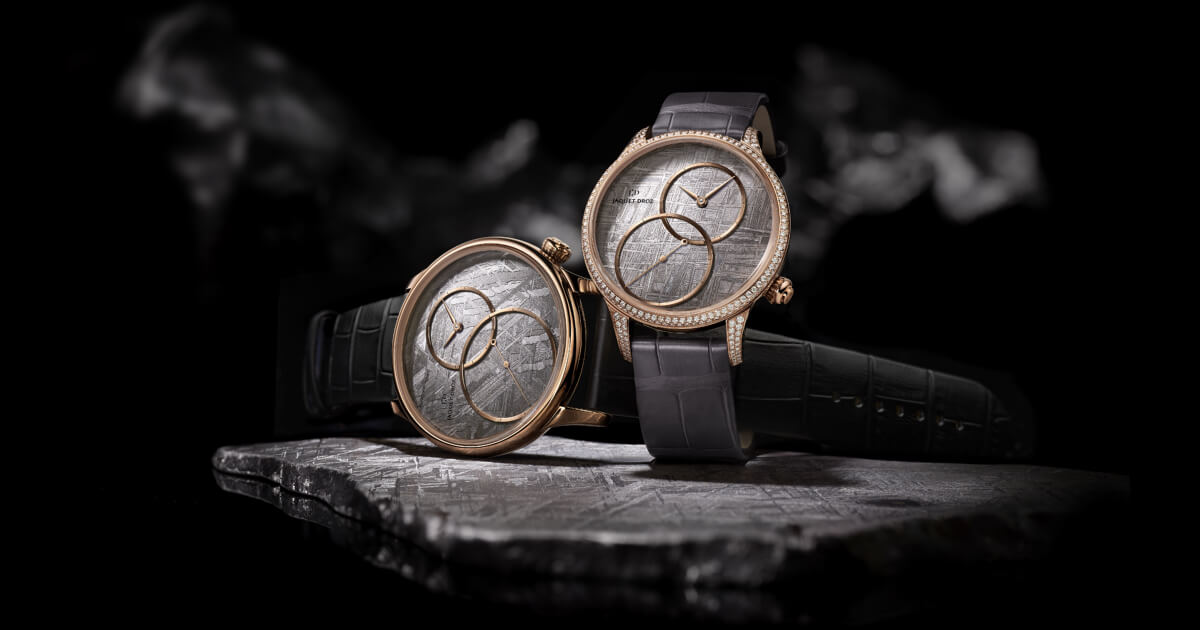 Jaquet Droz unveils two exclusive variations of its Grande Seconde Off-Centered timepiece, with dials made of meteorite and stromatolite. Each piece constitutes a wearable fragment of eternity that has traveled through space or time.

There are only two elements that cannot be comprehensively measured by humankind: space and time. In all likelihood the origins of time, and of the universe itself –just like the end of time and the end of the universe, if there is one– will be forever a mystery to us. We will never fully comprehend these concepts, which is why it continues to fascinate us.

The fact that Jaquet Droz has combined space and time in exceptional timepieces, therefore, owes nothing to chance. The Art of Astonishment is behind every one of its creations. The new Grande Seconde Off-Centered Meteorite watch embodies its perpetual capacity to foray into new realms of art and romance. Only three limited series of 88 pieces each will be issued: a 39 mm model, a 39 mm model set with diamonds, and a 43 mm model. These timepieces are as rare as the genuine meteorite that adorns their dials.

They are cut out by hand using a process that commands a rare level of skill. Meteorite is a fragment of asteroid that has penetrated the Earth’s atmosphere intact. Its long journey can be observed in shooting stars. The vast majority of meteorites burn up before landing; only a few rare fragments ever reach our planet's surface. Then begins the human challenge of tracking down the fragments on the Earth’s surface, gathering fragments large enough to work with, and cutting out from them disk shapes to fit the dial of the Grande Seconde Off-Centered watch.

Meteorite is composed of iron and nickel, and boasts an extraordinary density and hardness. The finest craftsmen must work patiently, using exclusive cutting techniques, to bring to life a meteorite dial with a flawlessly finished surface, down to the last micron. Each piece is one-of-a-kind. The motifs in meteorite, fashioned by their galactic journey, present a chunk of unfathomable mystery; a geometry that totally escapes human comprehension.

Jaquet Droz has harnessed its longstanding experience in crafting gemstone dials to showcase this mineral treasure in all its glory. The same level of expertise can be seen in the Grande Seconde Off-Centered Stromatolite watch.

This exceptional stone however presents a different structure than meteorite. Stromatolite is a fossilized sedimentary rock. Unusually it is biogenic, meaning it contains living components as well as fossils. Stromatolite played a role in the development of life on Earth. It dates back 3.5 billion years, making it one of the planet’s most ancient vestiges.

The new collection of Grande Seconde Off-Centered Stromatolite watches pays homage to this angular stone composed of life on Earth. The collection comprises only three pieces: a 39 mm model, a 39 mm model set with diamonds, and a 43 mm model, in a red gold case. Like Covelline, Biggs Jasper and other mineral creations in their day, these pieces honor the Art of Astonishment, whose inspiration extends from the farthest reaches of the cosmos to the origins of life on Earth.