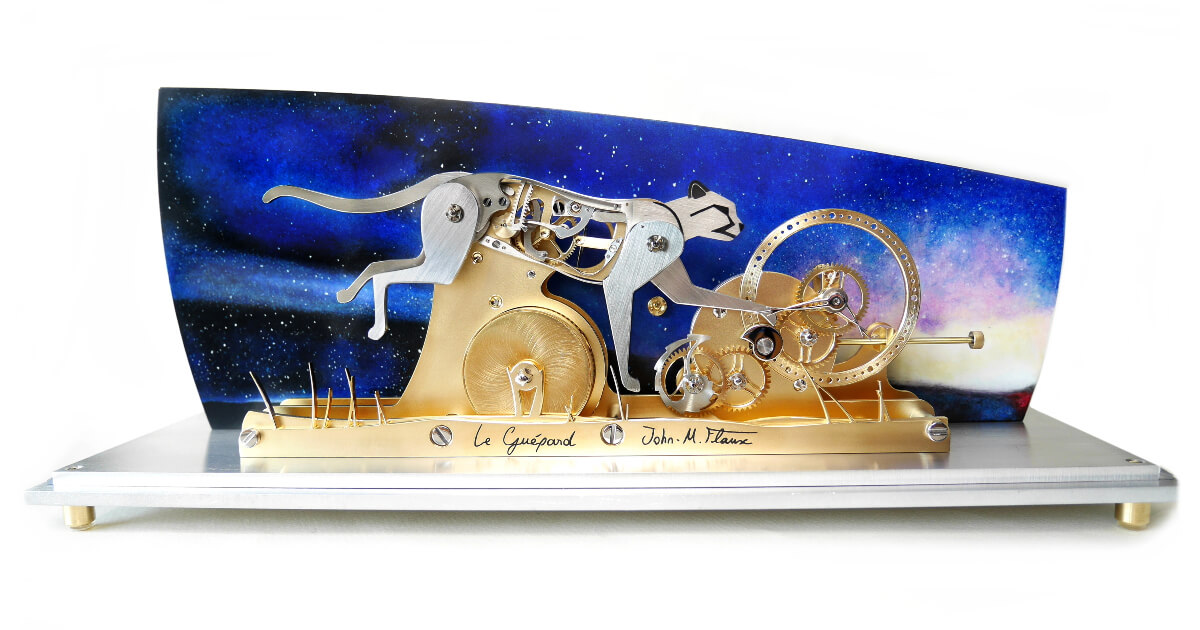 John-M. Flaux original idea was to fuse together watch mechanisms with insects, animals or machines: in short, to make different worlds meet. He finds that the mechanisms are completely transformed by their association with an animal or a machine.

With the Cheetah, he wanted to explore a fusion between animal and clockwork, but also a race against time. John-M. Flaux chose the cheetah because it's an animal he loves. It's very elegant and athletic, the fastest animal on earth. Unfortunately, it's now an endangered species.

To express all these ideas, he set his mind on a mechanism with a passing strike. It's a complex, visually and acoustically interesting mechanism, but also a symbolic reminder of the passage of time. You can choose not to look at the clock, but you'll always hear it ring.

I've worked on this cheetah and clockwork fusion without compromise. He designed each of the pieces so that they would all have a technical role as well as an aesthetic one. The cheetah's outline is entirely determined by the clock's mechanism.

Think of it as a striking complication and a cheetah, fused together. The mechanism sets every part of the cheetah in motion, in a hybrid, mechanical-animal show.

The background was painted by artist Line Descombes. This celestial painting is a symbolic image of his creative universe. Each one of these constellations represents a world to explore, each one with its own, almost infinite possibilities. Midnight blue is also a reference to blue-tempered steel often used in watchmaking. It goes perfectly with the mechanism's brushed steel and golden brass. On the right-hand side, Line painted dawn. For him, it represents hope for the cheetah's future, while it's still facing extinction.

Ultimately, this cheetah represents a race against time, against limits, and against its own extinction. The only way to win this race is to use the time we have to fulfil our dreams.

The Cheetah is a unique table clock with a passing strike complication. It takes its identity from the complication's aesthetic shape, which is modelled on the outline of a running cheetah. Each piece of the striking-work plays an aesthetic role in the cheetah's composition. Think of it as an hour-strike fused together with a cheetah. The mechanism sets every part of the cheetah in motion, in a hybrid, mechanical-animal show. The passing strike mechanism can also be repeated by pushing the tail.

• Repetition on demand actuated by the Cheetah's tail

• 1 month to hand-craft and assemble

• Limited to 5 copies, each Cheetah will be personalized and unique

• Winding and time setting via crown

• Complication winds up with a key

The animal & the complication:

a. Left front leg is the release lever

b. Right front leg is the big rack

b'. It also contains the hour pin

c. The tail is the repetition push-piece (striking mechanism can be repeated on demand) - It also moves when the clock strikes

d. The back consists of the big rack and springs.

f. Inside the body are the big detent lever, the stop lever, the spring for the top lever and the driving cam

g. The head moves with the rack

The price for the John-Mikael Flaux Le Guepard Table Clock starts from Euro €30,000 without Tax.