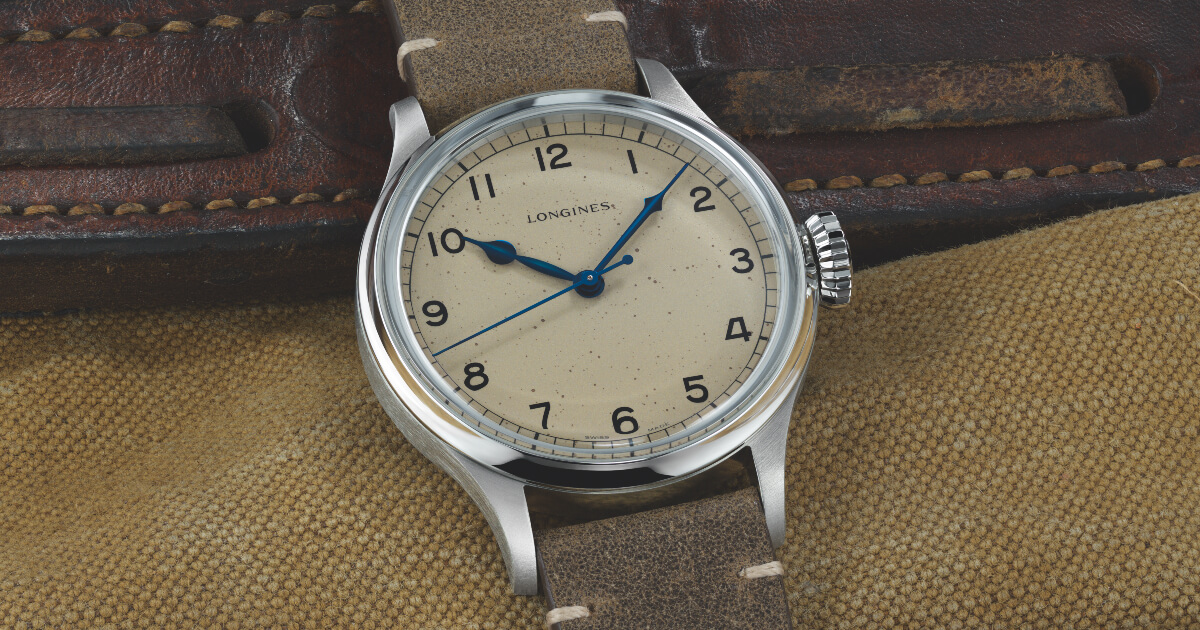 In honour of its rich history, Longines has drawn inspiration from a 1940’s watch model to create The Longines Heritage Military. True to the original lines of a timepiece designed for the British Royal Air Force, this sleek, reimagined watch belongs to a timeless style that has made the winged hourglass brand famous.  To reproduce the original timekeeper’s patina, the dial on the military watch has been hand sprayed with tiny black droplets, making each and every piece unique.

Proud to celebrate its history and achievements, Longines is expanding its Heritage collection with a reimagined military model from the 1940s. The Longines Heritage Military draws its inspiration from a watch created for members of the British Royal Air Force (RAF). Stanley Turner, a highly-decorated radiotelegraph operator aboard an RAF aircraft during the Second World War, wore this model around his wrist.

The watch once owned by Mr. Turner was recovered and offered to the Swiss brand by a young English collector, who inspired the current reissue. Thus, Longines is celebrating the 100th anniversary of the RAF in its own way.

With its minimalist design and 38.5 mm diameter, The Longines Heritage Military flawlessly adheres to the refined aesthetic and spirit of the period timepiece which, at the time, measured 32.5 mm. Its oversized winding crown evokes the original watch’s ease of handling.

The Longines Heritage Military also displays a silver, opaline dial with a subtle mist of fine droplets in black paint. This process, a first for Longines and performed entirely by hand, makes each and every piece unique while mimicking the oxidation found on the original. Despite housing an automatic movement, this timekeeper is the only piece in Longines’ current collections that does not carry the “Automatic” label on its dial in order to preserve the spirit of the 1940s.

Remaining true to the watch worn by Stanley Turner and his RAF colleagues, The Longines Heritage Military features a curved, fully polished bezel and box-form sapphire crystal.  The steel casing that houses the automatic movement (L888.2) comes with a green, aged leather watch strap, and a Nato strap in the same shades. Both versions of the strap are provided with each timepiece, along with the required replacement tool, all of which come in a case specially designed for the occasion.

The price for the Longines Heritage Military is CHF 2,000.