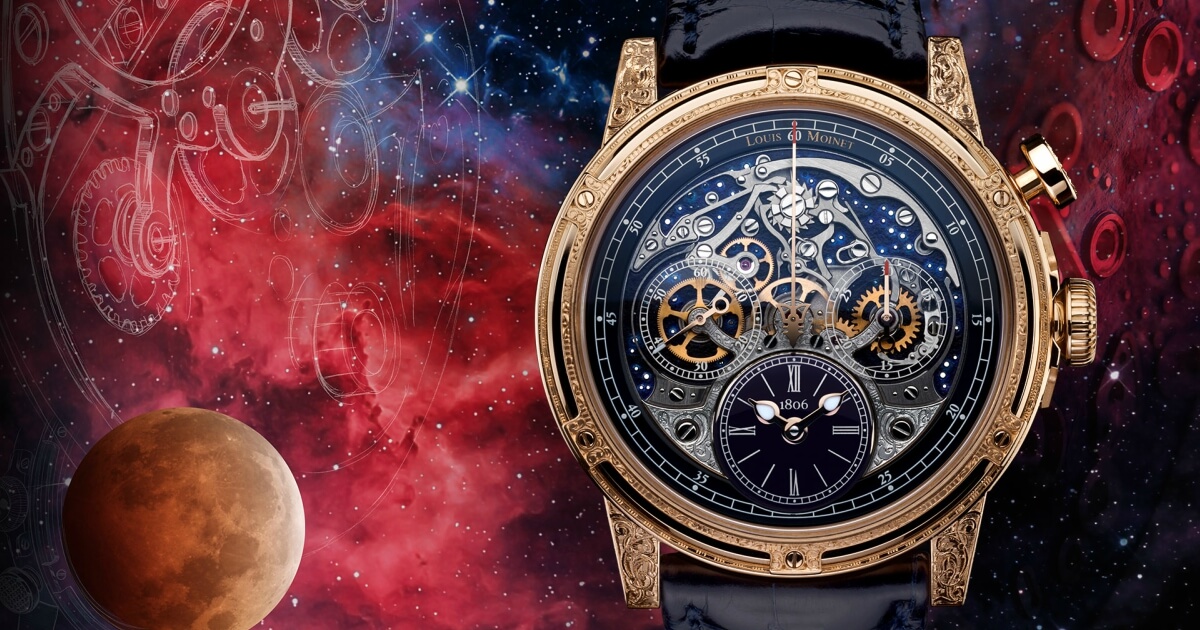 The new version of Memoris has the same distinctive characteristic as the earlier models: making the chronograph the primary function of the timepiece, instead of just a complication. After three years of developments, Ateliers Louis Moinet went about things just as the inventor of the chronograph did in his day: taking a completely different approach to watchmaking, rather than attempting merely to improve on an existing model. Indeed, that’s how Mr Louis Moinet himself invented the chronograph and was the first to incorporate the use of high frequencies – just one of his many remarkable achievements.

Memoris shifts the whole of the chronograph function to the dial, structuring it around three guiding principles: locating the chronograph centre stage; giving it a traditional clutch column wheel; and adding a monopusher – just like Mr Louis Moinet’s very own Compteur de Tierces, the first chronograph in History (1816).

The chronograph’s action can be admired in its entirety by activating the pusher. The column wheel orchestrates the graceful ballet of the mechanism of steel and gears, passing information to the hands. The chronograph reigns in splendid isolation on the dial, leaving the beholder in no doubt that it is neither a skeleton nor an additional component: the all-new movement has been designed for and around the chronograph. To complete the picture, Louis Moinet has opted to locate the traditional workings of the automatic mechanism on the back of the movement, beneath the plate. Its oscillating weight is decorated with a red moon in gold-leaf enamel.

The caliber on Memoris is the LM54. Beating at a rhythm of 28,800 vibrations per hour (4Hz), it boasts 302 components – and a 48-hour power reserve. Over sixty parts have been designed and manufactured to allow the chronograph to be presented atop a dedicated movement plate, separating it from the automatic movement beneath.

“Energie Plus” is an ingenious, automatic pawl winding system featuring an elegant spring with a ‘crab claw’ design. And to complete the assembly, a miniature ceramic ball bearing is mounted on the dual-material rotor.  The advantage of “Energie Plus” is that it allows the piece to be wound up in both directions, with a minimum of excess travel. This optimizes each movement of the rotor, recovering its energy, and winding the movement more effectively.

On the dial, Memoris’ starry base consists of a brass plate coated in a translucent blue. The stars have been created using an entirely new fixed graver process. Devised by one of Louis Moinet’s craftsmen, it involves attaching a specially-made lathe to a traditional rose engine (also known as a guillocheuse).

The idea is to combine the power of the rose engine with the precision of a handheld graver. The result differs from that produced by milling or stamping: while it resembles the effect traditionally associated with a guillocheuse inasmuch as material is removed, here this is focused on a tiny area with varying levels of depth – two characteristics that traditional engine turning seeks to avoid at all costs.

What is more, individual stars are all fashioned to feature different angles and depths, so that each and every one captures as much light as possible. Several fixed graver sessions are required per star. The process used is unprecedented in watchmaking – and the outstanding result gives the novel impression of stars that really are shining.The rose gold case is also fully hand-engraved, and decorated with jewels at the end of the lugs. The time is displayed on a dark blue grand feu enamel dial.

The rose gold “Red Eclipse” Memoris comes in a limited edition of 12 pieces.