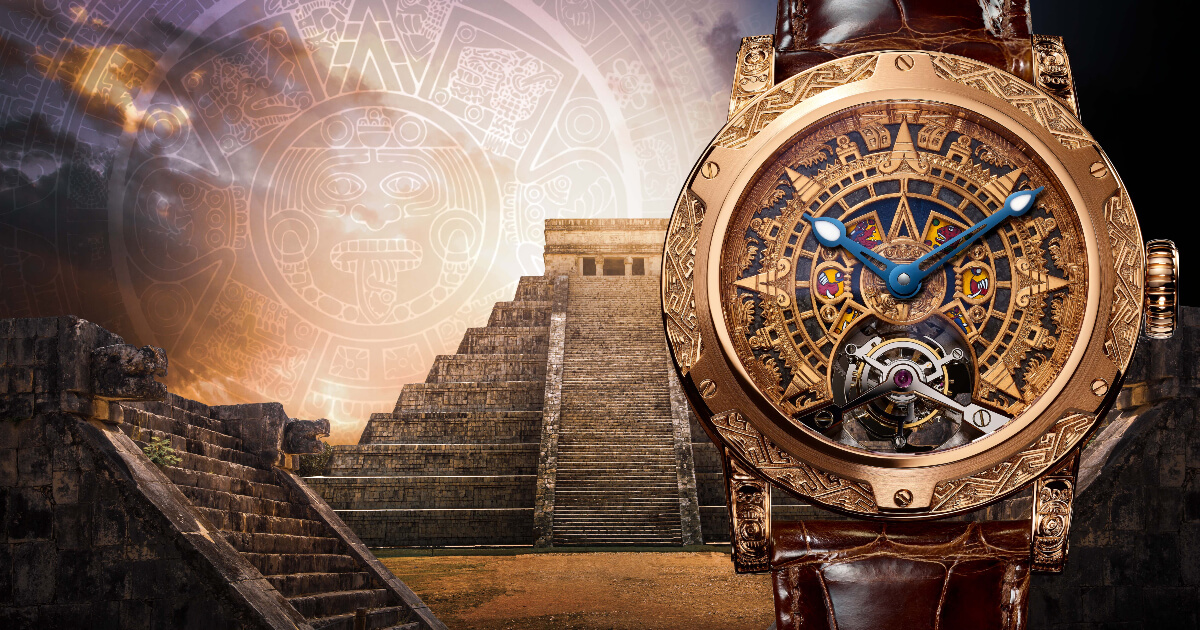 ‘Only Mexico’ is a unique piece that pays tribute to roots of Mexican culture. Ateliers Louis Moinet painstakingly gathered information and sought out the most typical materials of the country – and then blended them together in this spectacular, original creation. One key highlight is the presence of the oldest-known material in the world, Allende meteorite, found in the State of Chihuahua.

‘Only Mexico’ is fitted with Louis Moinet’s mechanical tourbillon. This won the gold medal at the most recent International Chronometry Competition – and beats at a rhythm of 21’600 vibrations per hour.

Louis Moinet’s legendary NEO case, cut from polished, satin-effect 5N rose gold, accentuates the imposing character of the piece. It owes its distinctive silhouette to the application of a large number of brand-new technologies.

Each component of the design reflects Mexico’s very special culture and history:

At the centre, the dial depicts the Sun Stone, one of the best-known and most iconic works in Aztec art. It was sculpted during the reign of the Aztec Emperor Axayacatl (1469-1481) to commemorate the New Fire ceremony in 1479. The enormous disc, 3.6 metres in diameter and weighing 24 tonnes, was cut from a single block of olivine basalt lava. Today, the Sun Stone is on display at the National Museum of Anthropology in Mexico City.

The Sun Stone comprises eight concentric circles, each with a whole host of references to Aztec cosmogony, describing how the World was formed. The second circle is especially noteworthy, displaying the symbols of the deities Ehecatl, Tezcatlipoca, Tlaloc, and Chalchiuhtlicue, and evoking the legend of the suns, a cosmogonic myth based on the creation and destruction of several successive worlds.

Dial edge: the Allende meteorite – the origin of time

Beneath the engraving of the Sun Stone lies is a dark-coloured meteorite – Allende.

The Allende meteorite is the oldest known material in existence, estimated to be 4.567 billion years old – making it 30 million years older than the Earth itself. When it fell at Allende in the State of Chihuahua on February 8, 1969, it weighed almost two tonnes, also making it the largest chondrite meteorite ever to have been found. It is considered to be the most-studied meteorite in history, yielding so much information about the formation of the solar system that cosmochemists view it as their ‘Rosetta Stone’.

Located beneath the second concentric circles of the Sun Stone, the Toluca iron meteorite has been given a blue treatment, making it truly resplendent.

The Conquistadors revealed its presence to the wider world in 1776, but it probably fell to earth over 10,000 years earlier – and for several centuries, it was used by the local populations to make a wide variety of tools.

The engravings draw inspiration from the typical architecture of the geometric friezes found on buildings in the Pre-Columbian city of Mitla, occupied by the Zapotecs. Some believe these bas-relief friezes form a mosaic symbolising the image of the Feathered Serpent.

These depict the Maya deity Chaahk, as observed on the monument at Kabah known as Codz Poop, the Palace of the Masks, in Yucatán. Chaahk is the rain god and protector of the harvests, striking the clouds with his thunder axe to produce rain and thunder.