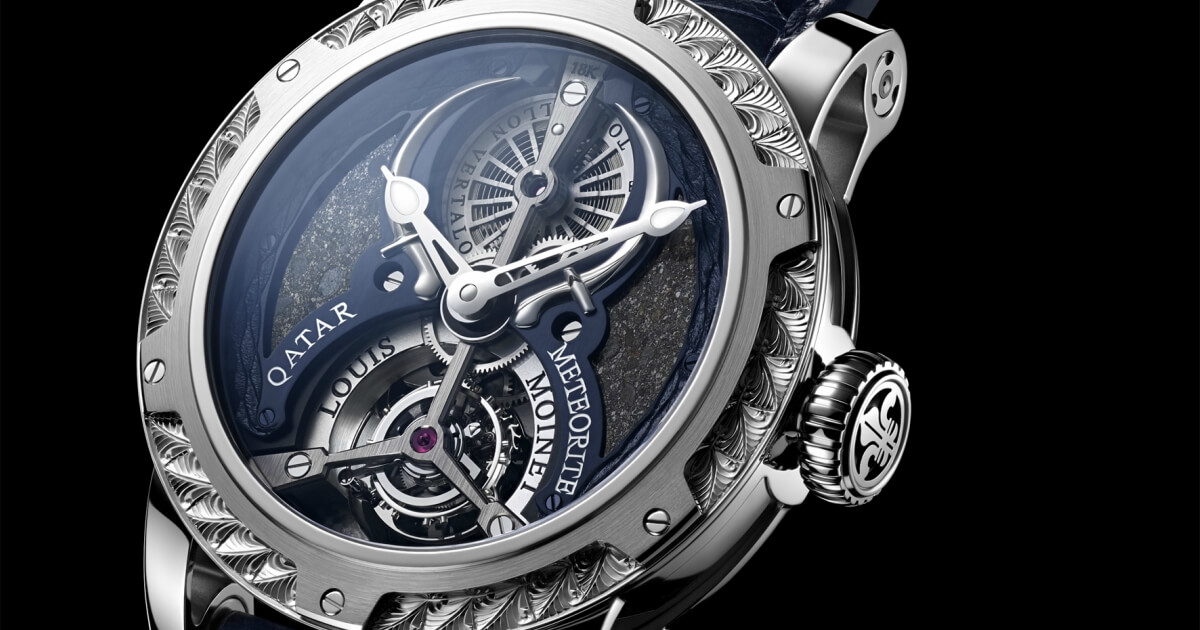 Only three such pieces will be manufactured, featuring two painstakingly cut fragments of the one and only meteorite ever to have been found in Qatar, inlaid in a spectacular dial. The two hand-engraved Qatari sabres and sand dunes add a special tribute to the Emirate.

The official name of the meteorite is Qatar 001, as assigned to it by the learned US-based Meteoritical Society. It comes from the main asteroid belt between the orbits of Mars and Jupiter, and travelled over 260 million kilometres before landing in the Jariyan al Batnah desert. As famous meteorite hunter Luc Labenne explains: “It’s a chondrite type H5, with a very high metal content. Its chondrules (the silicate mineral grains found in meteorites) are clearly visible.”

Jean-Marie Schaller, Louis Moinet’s CEO and Creative Director, says: “It’s an honour to be paying tribute to the State of Qatar by combining the art of watchmaking with this unique and authentic celestial heritage. Louis Moinet started creating works of art for Kings, Princes, Presidents, and Sultans as early as 1806. We’re now continuing his work by producing singular creations, dedicated to the most important figures of our time.”

The 45.4 mm-diameter Qatar Tourbillon case has been dubbed Neo: its new technical solutions have resulted in the creation of an all-new shape of watch. Everything is built around two vertical bridges that span the timepiece, securing the strap at each end of their lugs – these in turn feature the third and final openwork finish on the watch. The bridges support the movement’s housing, topped by a hand-engraved bezel secured by six screws – one of Louis Moinet’s signature touches.

The QATAR Tourbillon is a limited edition of just three pieces; its exclusive, manual wind movement beats at a rhythm of 21,600 vibrations per hour. One distinctive technical feature is that its particularly spectacular winding mechanism is visible through the caseback. The “octopus” spring fulfils three functions, acting as a lever spring, yoke spring, and click spring.

Waterproof: up to 30 metres