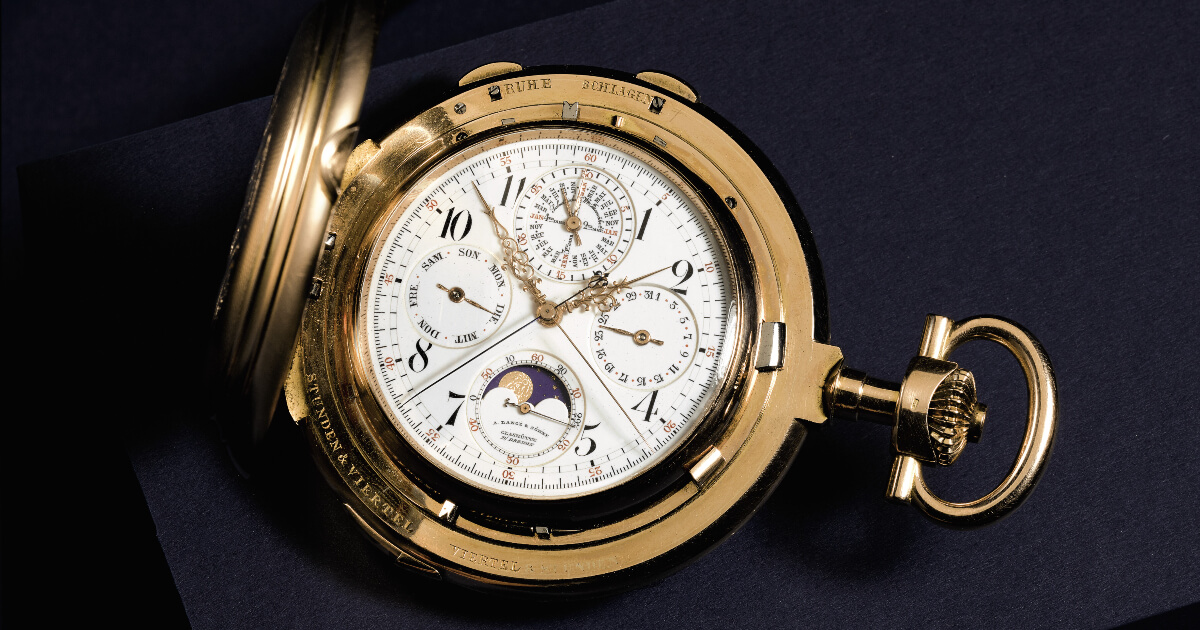 Masterworks Of Time: The Legacy of A. Lange & Söhne

In the wake of the swathe of records set in London this summer by the first of the offerings from the legendary “Masterworks of Time” Collection, Sotheby’s will now present a further selection of timepieces from this extraordinary collection in Geneva on 11 November 2019.

While the scope of Masterworks of Time is vast, chronicling the history of watchmaking from Renaissance to the 20th century, this autumn’s offering will focus on the legacy of A. Lange & Söhne, featuring one of the most impressive collections of timepieces by the German manufacture ever to appear at auction. Together, over 30 pieces chart the history of the pioneering family firm which changed the face of watchmaking in Germany and beyond. While the core of the sale will consist of watches made by A. Lange & Söhne themselves, these will be complemented by fine examples of Swiss, French and English pocket watches from the 16th to the 20th century.

Daryn Schnipper, Chairman, International Watch Division: “Lange and his sons built the German watchmaking industry entirely from the ground up: it was an early example of a start-up. The endeavour brought prosperity to Glashhütte and placed it on the map as a center for precision watchmaking. This is a family with horology in their DNA: following considerable adversity during the 20th century, in 1990 Walter Lange revived his great-grandfather’s vision. The Masterworks of Time collection represents the best of the best, throughout watchmaking history, and so it is only natural that the exceptional craftsmanship and precision of A. Lange & Söhne should be represented.”

A. Lange & Söhne: Birth And Rebirth

The importance of A. Lange & Söhne for German watchmaking is such that the two are almost synonymous. The manufacturer was the brainchild of Ferdinand Adolph Lange, who, after training with the famous watchmaker Johann Christian Friedrich Gutkaes in Dresden, Germany, travelled to France, England and Switzerland to hone his watchmaking skills. He then returned to his native town of Dresden, determined that watchmaking could bring prosperity to the nearby region surrounding the village of Glashütte, which was economically depressed.

In 1845, along with fellow watchmaker Adolf Schneider, who also trained with Gutkaes, he founded A. Lange & Cie., the foundation stone of an industry they built from the ground up. Starting with just 15 apprentices, the manufacture produced exquisite mechanical watches, famed for their hand-finishing, and early patrons included the German Emperor, Wilhelm II, Sultan Abdul Hamid II of the Ottoman Empire and Tsar Alexander II of Russia. The company thrived, as did the industry in and around Glashütte, and thirty years later sons Richard and Emil joined the business, which became A. Lange & Söhne. The rise of the Nazis and the Second World War led to great upheaval, and on the last night of the war, the manufacture’s main building was destroyed by bombing. In 1948, the Soviet expropriation began and the original company A. Lange und Söhne disappeared.

However, 40 years later – and exactly 145 years to the day after the original founding in 1845 - Ferdinand Adolph Lange’s great-grandson Walter resurrected the prestigious manufacture and restored it to its former glory. Today, the group operates out of a state-of-the-art carbon-neutral facility just a stone’s throw from where Ferdinand Adolph Lange first set out his vision for Glashütte.

A. Lange & Söhne’s peerless precision and the skilled craftsmanship of Glashütte is embodied in this stunning pink gold hunting cased clock watch with perpetual calendar, minute repeater, moon phases and split seconds chronograph. The piece, which was sold to its first owner in January 1901, is the earliest made perpetual calendar minute repeating grande and petite sonnerie clock with split seconds chronograph, and the most complicated watch made by the firm. It is the first of just nine watches made by A. Lange und Söhne between 1901 and 1928 (Lot 22, estimate CHF 400,000 – 600,000 / USD 403,000 – 605,000).

A later model from the prestigious Glashütte manufacturer, this exceptional and very rare silver open-faced keyless one-minute tourbillon watch with spring detent chronometer escapement and up/down power reserve indicator was first sold in 1924. A. Lange und Söhne made just 14 tourbillons between 1892 and 1925 and this piece was one of only seven with up-down indication (Lot 23, estimate CHF 80,000 – 120,000 / USD 81,000 – 121,000).

This quarter repeating open-faced clock watch in gold was made in 1820 by Johann Christian Friedrich Gutkaes. Highly accomplished and clockmaker to the Court of Saxony, Gutkaes apprenticed both Adolph Lange and Adolf Schneider, and so indirectly had a large influence on the birth of the Glashütte watch industry (Lot 18, estimate CHF 20,000 – 30,000 / USD 20,200 – 30,300).

A very early example of Lange’s work, this open faced free-sprung lever watch, No. 301, was made around 1849 and is signed A. Lange, Dresden, a signature used by Lange which would later be replaced by A.Lange & Söhne, Glashütte b/ Dresden. The watch features a free-sprung balance, to adjust the timekeeping of the watch. This feature requires more skill than the more common regulated balance, but is significantly more accurate. Sold without reserve, this piece represents a very interesting opportunity for collectors (Lot 17, estimate CHF 2,000 – 3,000 / USD 2,000 – 3,000).

Towards the end of the 19th century, as Germany’s prosperity grew, demand for ornate luxury watches expanded too. King Ludwig II of Bavaria was particularly interested in elaborately decorated presentation watches, frequently commissioning them as gifts for friends. This gold, enamel, rock crystal and sapphire-set keyless lever presentation watch with heavy gold chain and fob seal was created for him around 1885 by Adolf Schneider.

Schneider was a lifelong friend and associate of Ferdinand Adolph Lange. They studied together under the guidance of Johann Christian Friedrich Gutkaes, who would become father-in-law to each of them in turn, as they each married one of his daughters. Together, Lange and Schneider founded the watchmaking centre of Glashütte. This watch’s casefront is adorned with blue guilloché enamel, and the back of the case bears a carved rock crystal panel with the arms of Ludwig II (Lot 126, estimate CHF 40,000 – 60,000 / USD 40,300 – 60,500). This piece is one of the many presentation watches in the sale, many of which were made for recipients as prominent as Emperor Wilhelm II and Napoleon III.

In addition to the remarkable German pocket watches to be offered on 11 November, the sale will also include a magnificent and exceptionally rare gold, enamel and diamond-set hour striking musical double singing bird cage with timepiece. The piece, made around 1815, is one of just three of this type ever made. A feat of horology, it bears the maker’s mark for Frères Rochat, three Swiss brothers famous around the world for the sophistication and quality of their work creating movements featuring singing birds.