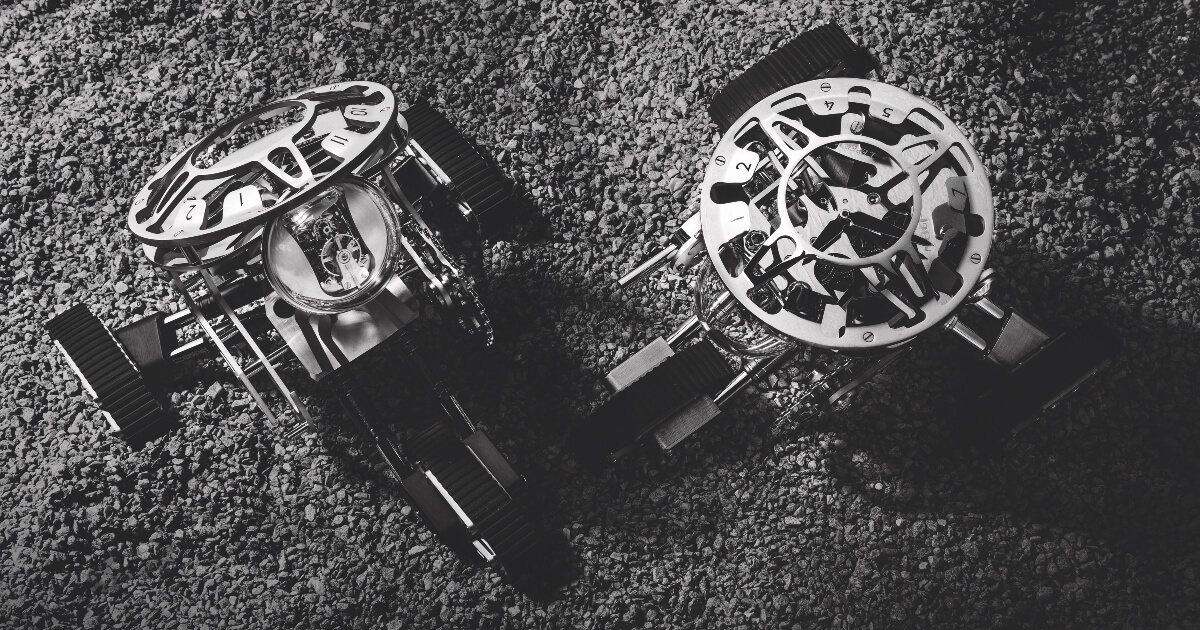 MB&F and L’Epée 1839 present Grant, a triple-tracked, Mad-Max-cross-Transformer robot clock on a mission. In today’s fast-paced, always-on, 24/7 world, we are under constant bombardment from time: seconds race by; there is never enough; everyone wants more; and it keeps getting faster and faster. The nearest hour was once precise enough; now the world’s most accurate clocks are better than a second over the entire age of the universe!

Grant is a robot with a time display on his shield and a mission to slow things down when time runs too fast. There are no incessantly flashing digital numerals on Grant’s shield, no constantly spinning second hand. Grant transforms frantic chaos into relaxing hours and minutes, and that’s all the time you really need.

While Grant’s time moves relatively slowly, he can travel quickly over rough terrain (or the messiest desk) on his three operational rubber tracks. Grant can also transform into one of three different modes: lying horizontally over his chassis for a low profile; crouching at 45 degrees; and sitting up 90 degrees. Grant’s time shield can always be set to a comfortable and optimal viewing angle.

Whatever the angle, Grant’s highly polished clockwork is on full display, and you can follow every click and turn of the gears. The mainspring barrel click near his ‘belly button’ is particularly mesmerizing in operation. The isochronal oscillations of the regulator keeping time in Grant’s glass-domed ‘brain’ are evidence of the clockwork’s high precision. Watching Grant “thinking” in real time is a stress-relieving activity in itself: Grant transforms time so that you can relax and enjoy it.

Grant's 8-day, in-line manufacture movement features the same superlative fine finishing as found on the finest wristwatches: Geneva waves, anglage, polishing, sandblasting, plus circular and vertical satin finishing. Hand finishing a clock movement is significantly more challenging than that of a wristwatch due to the larger surface areas of the clock components.

While he doesn’t look for fights, Grant believes offense is a great form of defense and packs appropriate weaponry. His left arm holds a “you-really-don’t-want-to-mess-with-me” spinning disk, while his right arm clasps a removable grenade launcher. Grant even has a surprise up his sleeve: his grenade launcher is removable and doubles as the winding and time-setting key for his 8-day clockwork, so he isn’t likely to run out of either firepower or time.

Grant is available in three limited editions of 50 pieces each in Nickel, Black, and Blue.

L’Epée 1839 developed Grant to MB&F’s design using its 8-day, in-line manufacture movement as a structural base. Grant doesn’t just look like a complicated piece of high-precision micro-engineering, he is an incredibly solid piece of complex high-precision micro-engineering with an impressive 268 components going into the construction of his body and clockwork. That’s more pieces than in many complicated wristwatches.

Under the transparent mineral glass dome on Grant's “head”, the clock movement’s regulator – consisting of the balance and escapement – features an Incabloc shock protection system to minimise the risk of damage when the clock is moved or transported. Shock protection is standard in wristwatch movements; however, it is unusual in clocks, which are generally stationary. But then Grant is no stationary clock; he is a robot on a mission to transform time.

Contrary to what you might expect, hand finishing a clock movement is actually significantly more challenging than that of a wristwatch due to the larger surface areas of the clock components. Grant's 8-day movement features a mix of Geneva waves, anglage, polishing, sandblasting, circular and vertical satin finishing.

Grant transforms into three positions, each with a practical purpose.

Position 1: Grant’s torso folds flat in his lap with his shield/time display lying horizontal across his back. This flat position enables the time to be easily read if Grant is significantly lower than the viewers’ eyes and, in this relatively stable position, the winding key will wind the 8-day mainspring.

Position 2: Grant’s torso locks securely into place at 45 degrees, from which he transforms into a more recognisably robotic shape. In this angled position, if resting on a desk or table, the time display is easily seen whether the viewer is sitting or standing.

Position 3: Grant’s torso sits up straight at 90 degrees to his chassis, with his shield now lying vertically along his back. In this position, Grant looks most like the Mad Max warrior he sometimes longs to be (that’s AI for you) and the key will now set the time.

What’s in a name? The Grant Tank, aka Medium Tank, M3

Medium Tank, M3, was a medium-sized American tank in use during World War II. In Britain, the tank came in two variations with differing turret configurations and crew sizes and each model was naturally given its own name. The Brits nicknamed the American-turreted tank "Lee”, after Confederate general Robert E. Lee; the British-turreted tank was called "Grant", after Union general Ulysses S. Grant.

The M3 tank had significant firepower (like MB&F’s + L’Epée 1839’s Grant) and was well armoured (unlike Grant). The M3’s drawbacks included a high silhouette and poor off-road performance, both issues rectified in the Grant: low profile (when laying flat) and excellent high-speed off-road performance (thanks to the three tracks).

General Ulysses Simpson Grant held the highest positions in both the military and the government of the United States. He led the Union Army to victory over the Confederacy with the supervision of Abraham Lincoln. As President of the United States (1869–77) Grant led the Republicans in their efforts to remove the vestiges of Confederate nationalism and slavery during Reconstruction.

Grant is available in three limited editions of 50 pieces each in Nickel, Black, and Blue.

Winding: key on right hand doubles as weapon and pulls out to reveal a double-depth square socket key that both sets the time and winds the movement (on the back/dial side of the clock).