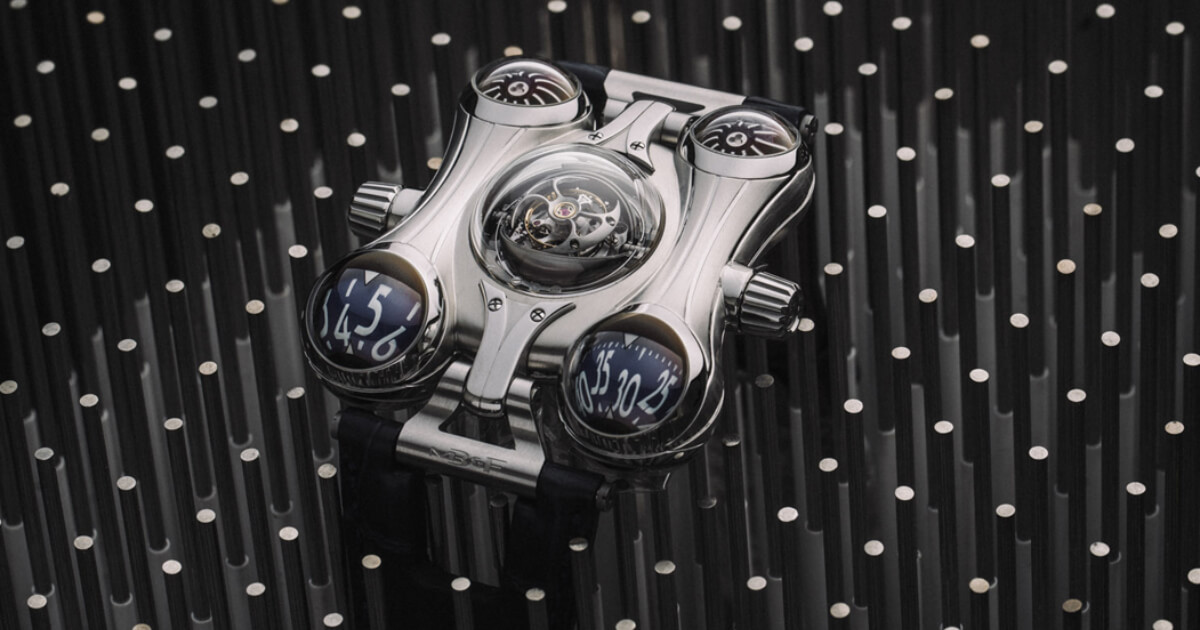 When the hottest-burning stars come to the end of their existence, they take one last stand in the form of a massive supernova. Horological Machine N°6 has only been around since 2014, but its audacious construction and design make it one of the brightest stars in the MB&F constellation, and it has entered supernova phase just four years after its debut. Horological Machine N°6 Final Edition comes in steel and is available in a limited edition of 8 pieces.

Following the case-material precedent set by Legacy Machine N°1 Final Edition, HM6 Final Edition is presented in stainless steel, a fittingly robust and durable material to memorialise the last outing of this series. Any machine that has experienced four years of intergalactic exploration – transitioning from cosmic pirate ship to futuristic alien vessel – is bound to bear the marks of adventure (or misadventure); the body of HM6 Final Edition is deeply grooved with polished lines that stretch from the turbine pods to the hour and minute spheres, contrasting sharply with the satin-drawn main surfaces.

The temperature of a star determines its colour, with the hottest stars appearing bright blue due to their higher radiation frequency. Appropriately, this shade features prominently in HM6 Final Edition. The platinum oscillating weight, visible through a sapphire crystal pane on the underside of the case, has been given a blue PVD (physical vapour deposition) coating. The hour and minute spheres are also in this arresting hue, with numerals and markings standing out in thickly applied Super-LumiNova that luminesces light blue.

The hour and minute spheres are oriented perpendicular to the rest of the engine to facilitate readability and are driven by conical gears to ensure that this unusual configuration still provides the necessary precision in displaying the time. At the opposite end of the HM6 engine, twin turbines create air resistance that protects the automatic winding system. Such commitment to the mechanical integrity doesn’t come easily. The engine of Horological Machine N°6, comprising 475 components, took three years of research and development to realise – almost as long as the entire lifespan of the HM6 series itself.

Central to the design and construction of HM6 is the flying tourbillon, protected by a retractable shield and evocative of the sharply controlled chaos at the heart of our universe. Now that things are coming to a close for HM6, the sapphire crystal dome above the flying tourbillon takes a page from the show-all playbook of HM6 Alien Nation and expands its dimensions in order to more fully expose the beating regulator in its revolving cage.

Horological Machine N°6 Final Edition completes the cosmic circle begun by HM6 Space Pirate, a supernova finish to a series that belongs in the stars.

MB&F launched Horological Machine N°6 in November 2014, all biomorphic curves and brushed metal in its inaugural edition, known as Space Pirate first in titanium then in red gold. Just over a year later, at the beginning of 2016, HM6-SV (Sapphire Vision) followed, with the uppermost and lowest sections of the case in transparent sapphire crystal, sandwiching a centre segment of platinum or red gold. In 2017, HM6 Alien Nation made its debut, featuring a full sapphire-crystal case and an additional passenger load: six micro-sculptures of alien hominids.

The initial sparks of inspiration for HM6 came from a 1970s and 1980s Japanese anime TV series called Capitaine Flam, featuring the eponymous captain and his improbably bulbous spaceship. The Sapphire Vision edition of HM6 took graphic elements from a travel icon of the 1950s and 1960s, American Greyhound buses of the so-called Streamline era, with their lateral grooves and bright metal sidings.

Every aspect of the HM6 engine is constructed to intersect neatly with this retro-modernist take on space travel and technology, from the sleek whirling turbines with curved fins to the cinematic flying tourbillon with its manually operable shutters. The signature MB&F battle-axe appears in two places in the HM6 engine: in single-headed form for the rotor, and double-headed for the upper tourbillon cage.

There are 50 titanium and 18 red gold pieces of HM6 Space Pirate, 10 pieces of HM6-SV in platinum and 10 pieces in red gold, and four unique pieces in the Alien Nation edition. With the 8 pieces of HM6 Final Edition, the number of pieces made in the Horological Machine N°6 series comes to a total of exactly 100.

The otherworldly engine of Horological Machine N°6 was created over three years of research and development. It was the second tourbillon movement to come out of MB&F and the first flying tourbillon to do so.

Unlike other flying tourbillons, which safeguard chronometric performance by keeping the rotating escapement as close to the main body of the movement as possible, the flying tourbillon of the HM6 engine is distinguished by its extreme height, a mechanical and philosophical challenge equal to the audacity of the overall HM6 design. Its one concession to the laws of nature is the retractable titanium shield that protects the lubricating oils essential to the smooth operation of the flying tourbillon from the oxidising effects of the ultraviolet radiation present in sunlight.

Time is displayed through two rotating hemispheres, marked separately with the hours and minutes. These hemispheres are milled to paper-thinness to reduce the torque demand on the mainspring barrels and extend the power reserve to its maximum length. Additional mechanical and visual complexity is offered by the positioning of the hemispheres such that they rotate perpendicular to the rest of the geared elements in the HM6 engine. Conical gears are employed to achieve this angular translation without compromising a single iota of precision engagement.

A space-worthy craft would not be complete without multiple security features and guards, and the automatic winding system of the HM6 engine is equipped with turbines that act as a winding buffer. Two sets of curved fins provide the necessary air resistance to keep the winding rotor within a safety zone of oscillation speed, further enhancing the longevity of this complex 475-component engine.

With the Final Edition of Legacy Machine N°1 (2011-2017), steel was established as the material that would distinguish future such editions, a choice that has been perpetuated in HM6 Final Edition.

Completing an MB&F series is a major strategic decision and is central to the belief in continual exploration and development that is held by everyone at MB&F. Only by ending production of existing pieces are Maximilian Büsser and his team able to go on to future challenges while keeping the creative spark and momentum that comes with a compact organisation.