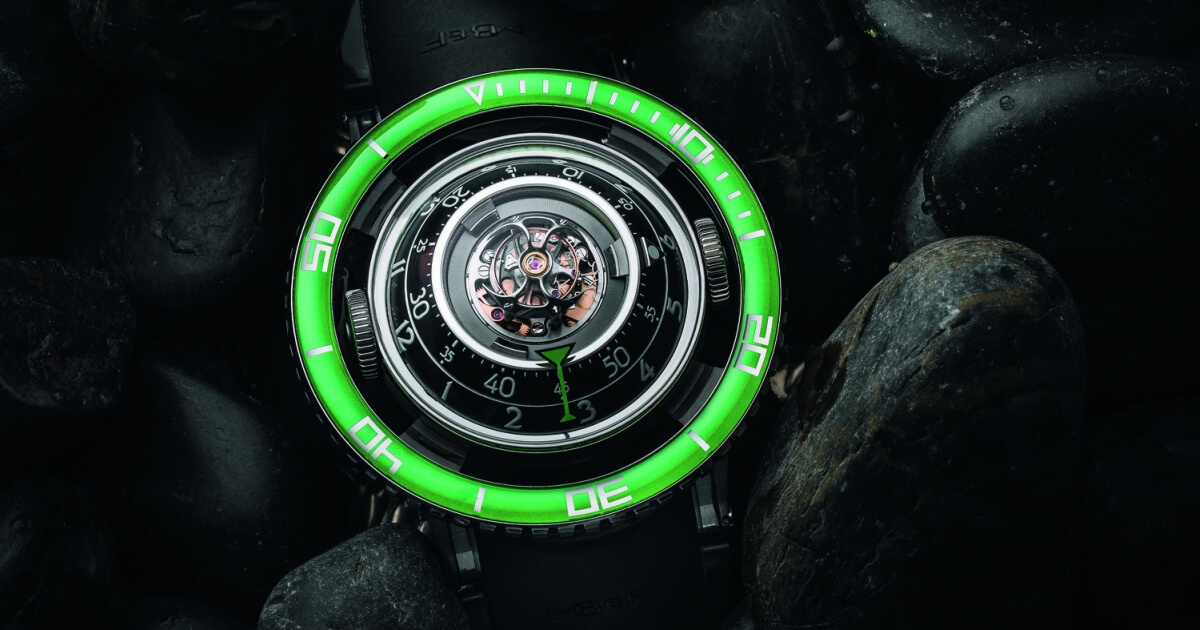 First launched in 2017 – in red gold with black ceramic bezel, and in titanium with blue ceramic bezel – MB&F HM7 is back in a titanium case with a green sapphire crystal bezel, limited to 50 pieces.

After pushing the boundaries of horological exploration by blasting into outer space (HM2, HM3, HM6), launching into the sky (HM4), and powering down the road and around the track (HM5, HMX, HM8), MB&F plunges into the water with Horological Machine No.7, aka HM7 Aquapod.

The organic jellyfish-inspired design of HM7 Aquapod is counter-balanced by the very mechanical horology within: a central flying tourbillon tops the concentric vertical movement architecture, with indications radiating out from the centre like ripples in a pond.

The winding rotor’s tentacles are crafted from a solid block of titanium; their very three-dimensional nature makes machining and finishing extremely challenging. Underneath the tentacles, a platinum mass ensures powerful and efficient winding.

And then there's that bezel. While Horological Machine No.7 is not a dive watch, it is a timepiece comfortably at home in the water – so MB&F added the one element that all serious aquatic watches possess: a unidirectional rotating bezel. However, unlike every other dive watch on the planet, Aquapod's bezel isn't attached to the case, but floats apart like a life buoy.

The 303-component, 72-hour power reserve HM7 Engine was developed in-house by MB&F. Spherically three-dimensional, all its mechanisms – from the winding rotor at the bottom, past the mainspring barrel and hour and minute displays, to the flying tourbillon on top – rotate concentrically around the centre. The curves of the high-domed sapphire crystal are mirrored in the shape of the time display rings, which are not simply flat and angled, but are mathematically precise, curved spherical segments.

And, like many jellyfish, HM7 glows in the dark. It glows where you would expect it to – on the hour and minute numerals – but also around the inside of the movement, to light up that flying tourbillon at night… and in addition, along the tentacle-like winding rotor so that its operation, too, can be appreciated in the dark.

The idea for an aquatic watch originated from MB&F founder Maximilian Büsser’s memories of family beach holidays, which included an encounter with a jellyfish. While the encounter may have been minor, the seed it planted in Büsser's brain for a three-dimensional timepiece powered by tentacles was anything but. And even though the concept for Horological Machine No.7 came relatively quickly, the development took many years. So many years of development were necessary that, perhaps confusingly, HM8 ended up launching before HM7.

While HM7 Aquapod is as contemporary as could be, the concept of the three-dimensional, spherical movement architecture is centuries old, originating in the "onion" pocket watches popular in the 18th century. Whereas the majority of watch movements are developed horizontally to be as flat as possible, the Engine of HM7 goes up, not out, with all of its components arranged vertically. The movement of HM7 was entirely developed in-house by MB&F.

From bottom to top, the winding rotor, mainspring barrel, hour and minute indications, and flying tourbillon are all concentrically mounted around the central axis. Energy travels from the rotor at the very bottom of the movement to the flying tourbillon regulator at the very top via gearing acting like a series of stairs, allowing power to transition from one level to the next.

This concentric architecture allows for the hours and minutes to be displayed around the periphery of the movement; however, this presented a serious challenge in itself: how to support such large-diameter time display rings? The answer was to develop extra-large diameter ceramic ball bearings, to support the spherical segment hour and minute displays and rotate with a very low coefficient of friction. The spherical segment discs are in aluminium and titanium for both minimum mass and maximum rigidity.

The winding rotor’s tentacles are machined from a solid block of titanium. Their curved, very three-dimensional nature is a manufacturing challenge, both for machining and for finishing, which alternates between polished and satin-finished sections. Hidden underneath the lightweight titanium tentacles, a sector in much heavier platinum ensures that the HM7 Engine is wound efficiently.

Hours and minutes are displayed by two spherical segment discs in aluminium and titanium, which are supported by specially developed oversized ceramic ball bearings.

The hour and minute numerals and markers have been hand-painted in Super-LumiNova, making them legible by night. They are hand-painted, because it is impossible to print neatly on such complexly-curved components.

The case of HM7 Aquapod is basically a three-dimensional sandwich comprising two hemispheres of high-domed sapphire crystal on either side of a metal case band. The unidirectional bezel floats outside the case proper, while dual crowns are located between the two structures: the one on the left is for winding the movement (if necessary) and the crown on the right is for setting the time. The large crowns are ergonomically designed for ease of use, even when manipulated with wet fingers.

For the blue and black bezels, the numerals and markers are first engraved in the ceramic using a laser, after which the engraved sections are filled with metalized titanium. The whole ring is then polished to a high gloss. In order to obtain the perfect colour for the green edition, a sapphire crystal ring is inserted in the bezel; numbers and markets are metalized under the sapphire crystal, along with a layer of green lacquer.

The strap in engraved aircraft-grade rubber highlights the casual nature of HM7 Aquapod, ensuring that it looks just as good with jeans and a t-shirt on land as it does with a bathing suit in the water.

Paradoxically, jellyfish (also known as medusa) are neither fish, nor are they made of jelly; like us they are mainly composed of water. Jellyfish, the oldest multicellular animals on the planet, much older than dinosaurs, are the ultimate in distributed information processing, having no central brain but a connected ring of nerves that takes care of any thinking required. Jellyfish are sensitive to touch, they see and they navigate.

Jellyfish can be easily cloned: if you cut one in half (not recommended), it will grow into two genetically identical jellyfish. And jellyfish have been in space: in 1991 the space shuttle Columbia took a few jellyfish into space, where they successfully bred.

Jellyfish glow, often quite beautifully. Various species use phosphorescence, luminescence, or bioluminescence to glow, with the aim of either attracting prey or warding off predators. Luminescent tentacles are particularly effective as they have the effect of making a relatively small organism look very large.

Numerals, markers and segments along the winding rotor in Super-LumiNova

Two crowns: winding on left and time-setting on right

Top and bottom sapphire crystals treated with anti-reflective coating on both faces.

The new HM7 Aquapod Ti Green is limited to only 50 pieces.