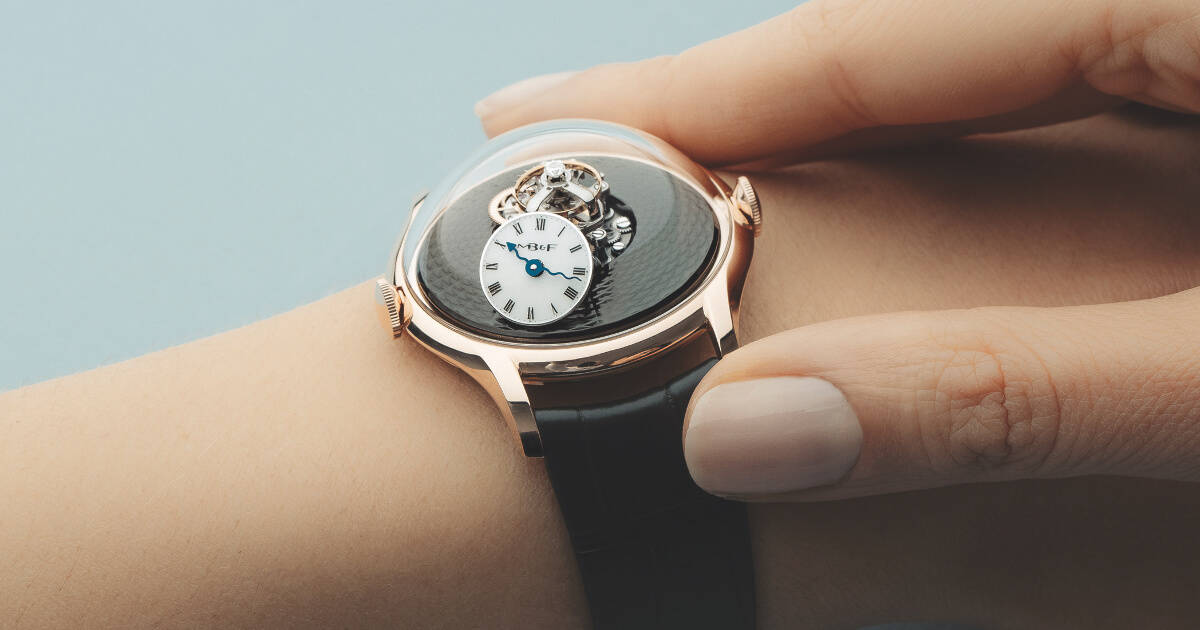 The story begins (as so many do) with a woman. Legacy Machine FlyingT owes its genesis to founder Maximilian Büsser’s ruminations on the keystone roles that women have played in his life. Launched in the first months of 2019, Legacy Machine FlyingT (Please more about this watch here) manifested a rich and complex femininity, choosing to embody elegance and vitality — a formidable resilience — over the softer conventions of womanhood as familiarly seen in watches aimed at the XX side of the chromosome divide.

A soaring flying tourbillon projects, column-like, from the dial plate of LM FlyingT, driven by energy generated by the sun-shaped rotor. A diamond flashes atop the upper tourbillon cage. Dynamism and precisely engineered motion characterise LM FlyingT, which debuted in three white gold diamond-set editions: one with a simple halo of brilliant-cut gems on the bezel and lugs, one fully paved with brilliants and one fully paved with baguette-cut stones. This powerful articulation of feminine horology, the first of its kind from MB&F, was awarded the Prix de la Complication pour Dame at the 2019 Grand Prix d’Horlogerie de Genève.

In 2020, LM FlyingT sheds its diamonds and embraces its natural self with an edition in red gold and one in platinum.

Removing the crystallised carbon crust of Legacy Machine FlyingT allows to rediscover the central column of the flying tourbillon in hyperfocus. In place of the stretched-lacquer dial plate is a guilloché plate with a radial pattern of scalloped arches, drawing the eye towards the cinematic heart of the in-house developed engine.

The guilloché dial plate, executed by longtime MB&F collaborator Kari Voutilainen in his specialised dial facility, exists in two versions. One is as dark as a moonless night, and is housed in a red gold case, while the other is midsummer sky-blue, with a platinum case. The same LM FlyingT, when switched between nocturnal and diurnal modalities, is as different as the world when seen by night and by day.

Only one glittering connection to their diamond-armoured predecessors remains to the new editions of Legacy Machine FlyingT. At the top of the flying tourbillon that gives LM FlyingT its name, a single 0.035-carat stone that rotates in time with the underlying mechanism, making one complete turn every 60 seconds. At each of the rotational angles that it undergoes — 300 per minute, as predefined by the 2.5Hz (18,000vph) balance — the diamond unleashes a new lance of prismatic light, thanks to its sharply faceted cut.

At the foot of the flying tourbillon, located at the 7 o’clock position, is a dial of white lacquer that displays the hours and minutes with a pair of blue serpentine hands. The dial is inclined at a 50° tilt so that the time can be read only by the wearer; an intimate communication that highlights the personal nature of the LM FlyingT.

On the reverse, the automatic winding rotor takes the shape of a three-dimensional red gold sun with sculpted rays, providing LM FlyingT with four days (100 hours) of power reserve.

About the guilloché dial

The intricate pattern of the LM FlyingT dial plates are created exclusively at Comblémine, the dial facility of Kari Voutilainen, located in the alpine district of Val-de-Travers. The unique scalloped design is created by engraving a brass disc with a hand-guided rose engine.

Each disc is engraved manually, in accordance with Voutilainen’s strict codes of traditional watchmaking decoration technique. Many of the dial patterns that emerge from Comblémine are conceived entirely in-house through years of expertise and know-how, and their execution is a secret known only to the most senior members of the workshop, including Voutilainen himself.

The pattern of the LM FlyingT dial plate is simultaneously versatile and evocative, carrying a wealth of associations that reinforces the kinetic dynamism of the flying tourbillon. From the sleek overlapping discs of supple mediaeval scale armour, to the light-dappled scales of a fish darting through the water, to the foam-edged waves of the sea, the radial scalloping of the dial plate pattern is as rich with visual association as LM FlyingT itself.

The mechanical antecedents of Legacy Machine FlyingT lie mostly in the Horological Machine collection, namely with the HM6 series and HM7 Aquapod.

In a departure from most modern watch movements, which take a radial and co-planar approach to movement construction, the LM FlyingT engine (and the HM7 engine before it) utilises a vertical and co-axial approach. The cinematic flying tourbillon, which boldly projects beyond the dial-plate of LM FlyingT, is a visually stunning example of the rotating escapement and stands in stark contrast to other flying tourbillons, which usually do not venture past the confines of their surrounding watch dials.

Flying tourbillons, as their name suggests, are anchored only at their base, with no stabilising bridge to restrict lateral motion at the top. This increased need for overall rigidity is what causes the conservative placement of most flying tourbillons within their movements. With the HM6, HM7 and now LM FlyingT, MB&F breaks free of this limiting need for movement security and confidently displays its flying tourbillon in all its glory.

In order to display the time as precisely as possible on the 50° inclined dial, conical gears were employed to optimally transmit torque from one plane to another, a solution first used in HM6 and subsequently in HM9 Flow.

The 280-component engine of Legacy Machine FlyingT has a power reserve of four days, which is among the highest within MB&F, a testament to the growth of in-house expertise and experience.

·       Central flying 60-second tourbillon, with a diamond at the top of the flying tourbillon cage

·       Two crowns: winding on left and time-setting on right

The prices for the MB&F Legacy Machine FlyingT Red Gold and Platinum Editions are: